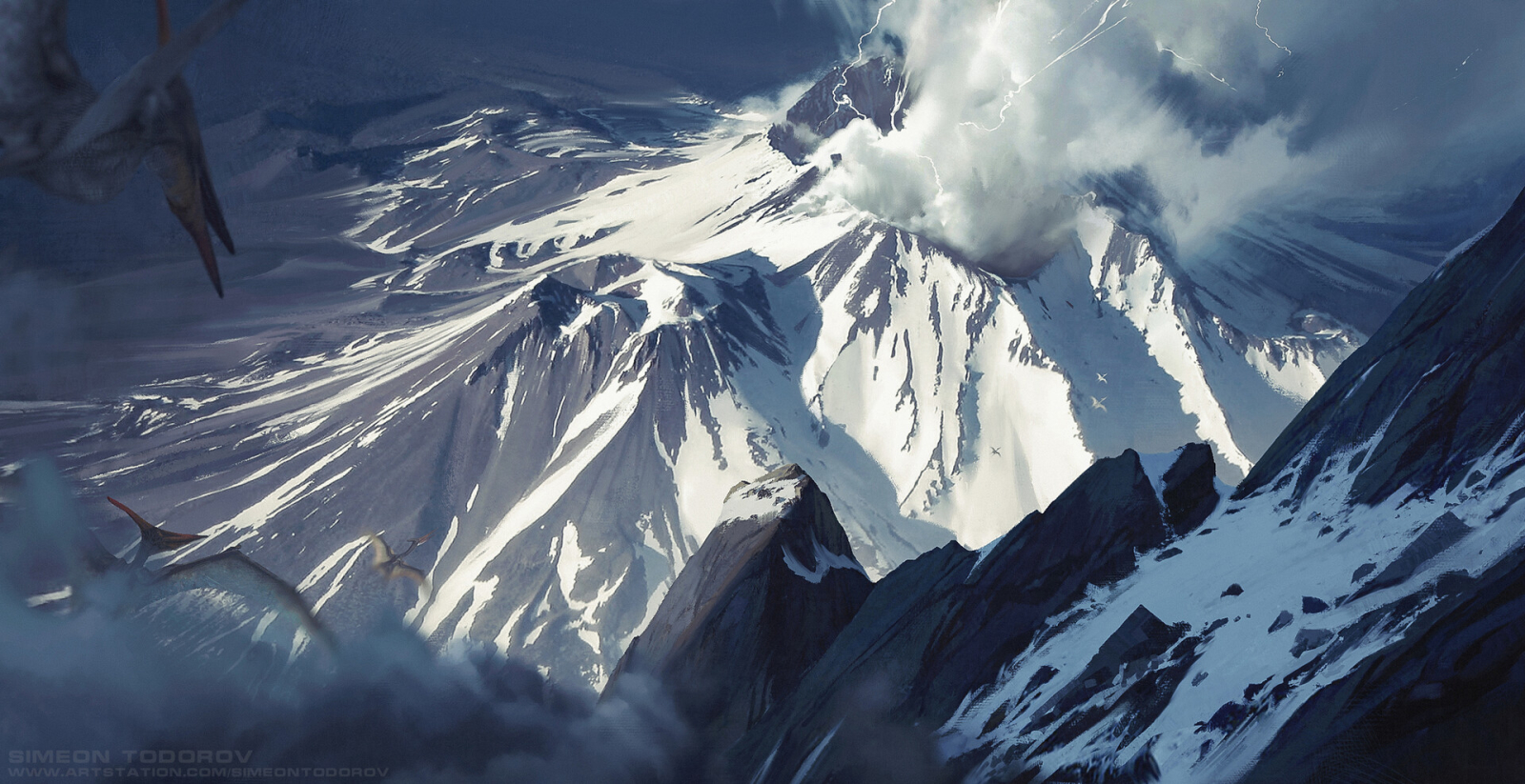 For the longest time we believed the world under us dead and silent, the mountains of Dawn and Dusk mere ruins of the ancient world. One week was enough to remind us. Remind us that the world is very much alive. That it still contains the embers left from the Oblivion Hour.
— Cassius Argasta, Vardanian Archivar

Volcanic eruptions are nothing out of the ordinary in the lands around the Great Divide. The violent mountains are part of daily life in many areas and have left their mark in pretty much every culture's memory. But every once in a while there is an event so violent, so utterly destructive that it burns itself into the very conscious of humanity. Four-thousand years ago, the Oblivion Hour did so when it annihilated the Ancient World . And over one-thousand years thereafter, the Infernal Hour showed mankind that the fire under their feet was anything but extinguished.

The year was 172 DA and civilization had just barely begun to grow and thrive following centuries of trial in the Time of Twilight. Tribes began to slowly coalesce into larger entities and people like the Avitae and Illigarans, which would have great impact on later millennia, are thought to have emerged in this era. Isolated cities began to pop up and the Eternal Empire took its first tentative steps in exploring the calming oceans. And in the far north of the world, in a region now known as Mykonia, a long-dormant peak started to wake...

by Quentin Collombet
Mount Ereban's eruption was utterly devastating, the surrounding area remaining a lifeless wasteland for centuries thereafter. The thunder of its explosion could be heard nearly a thousand kilometres away. Had people been able to witness this event, they would have called it the wrath of god and remembered it for millennia thereafter. But as grand as it was, the eruption of Mt. Ereban was merely a taste of what would follow.   One after another, previously calm peaks in the Walls of Dusk and Dawn began to spew fire and ash. Molten rock poured over the earth in great rivers and the fiery debris turned once lush forests into hellish landscapes. Streams of searing ashes washed over the land and great clouds shrouded sun and moon. Many thought it the return of the Twilight and despair once again filled the soul of men.
Widow Peak

It was here that Vardania's most dangerous mountain would make itself known for the first and only time. The lone mountain in the northern Reach unleashed an inferno unlike any seen since the Oblivion Hour. A tidal wave of burning ash carved itself a way across half the continent forming what would later become the Reach in the process. The event was witnessed by the ancestors of the Rhovarin and would become a key part of their mythology and culture.
Ulaidri

In the far south, in a land future generations would know as Themyra, a pit opened and began to spew molten rock across the region. Day after day, until nearly all in the vicinity was buried under cooling black basalt. Southern myths still speak of the Ulaidri, the Burning Cascade and in modern times, the region is known as Uleandros, the Black Land, for it rises above the surrounding earth, of black stone, nearly a dozen meters high and seven days across.
Teamar's Doom

Not all of these events occurred without loss of life, however. Teamar was an ancient kingdom located of the coast of Vardania. A verdant paradise, filled with life of all kinds. Until it was torn apart by the earth's forces. Within a single terrible night, the island was ripped apart by a volcanic eruption. All that remained was a series of small islands, now known as the Teamari. Thousands are said to have perished, the Teamari people thought to have gone extinct. 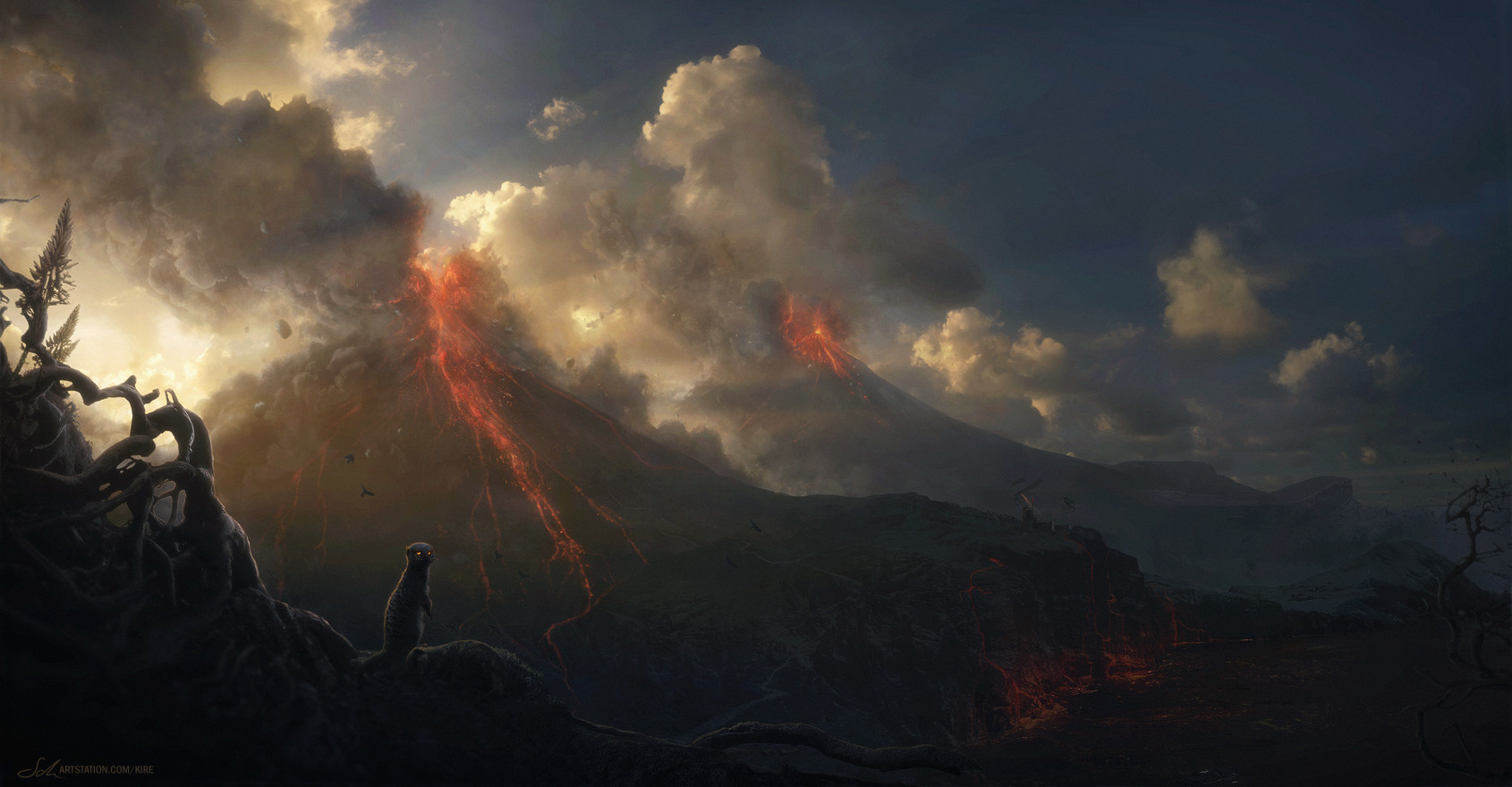 by Erik Shoemaker
It is only through the century-long efforts of the archivars that we are able to somewhat grasp the true extent of the Infernal Hour. A vast collection of myths, carvings and records paints the terrifying picture of over four-hundred-and-fifty Volcanic Eruptions within a single year. Although Chain Eruptions are a known phenomenon by now, there is none in recorded history that has even approached this scale. Further records show that the massed ash clouds seemed to have caused a short cooling period, long harsh winters breaking the up to this point warm Dawn Age.

Seeing its remnants in both nature and man, there can be no doubt that the Infernal Hour burned itself into the world. The force of nature, oh even the mythical wrath of gods cannot compare.
— Illio Monarin, Mykaran Scholar 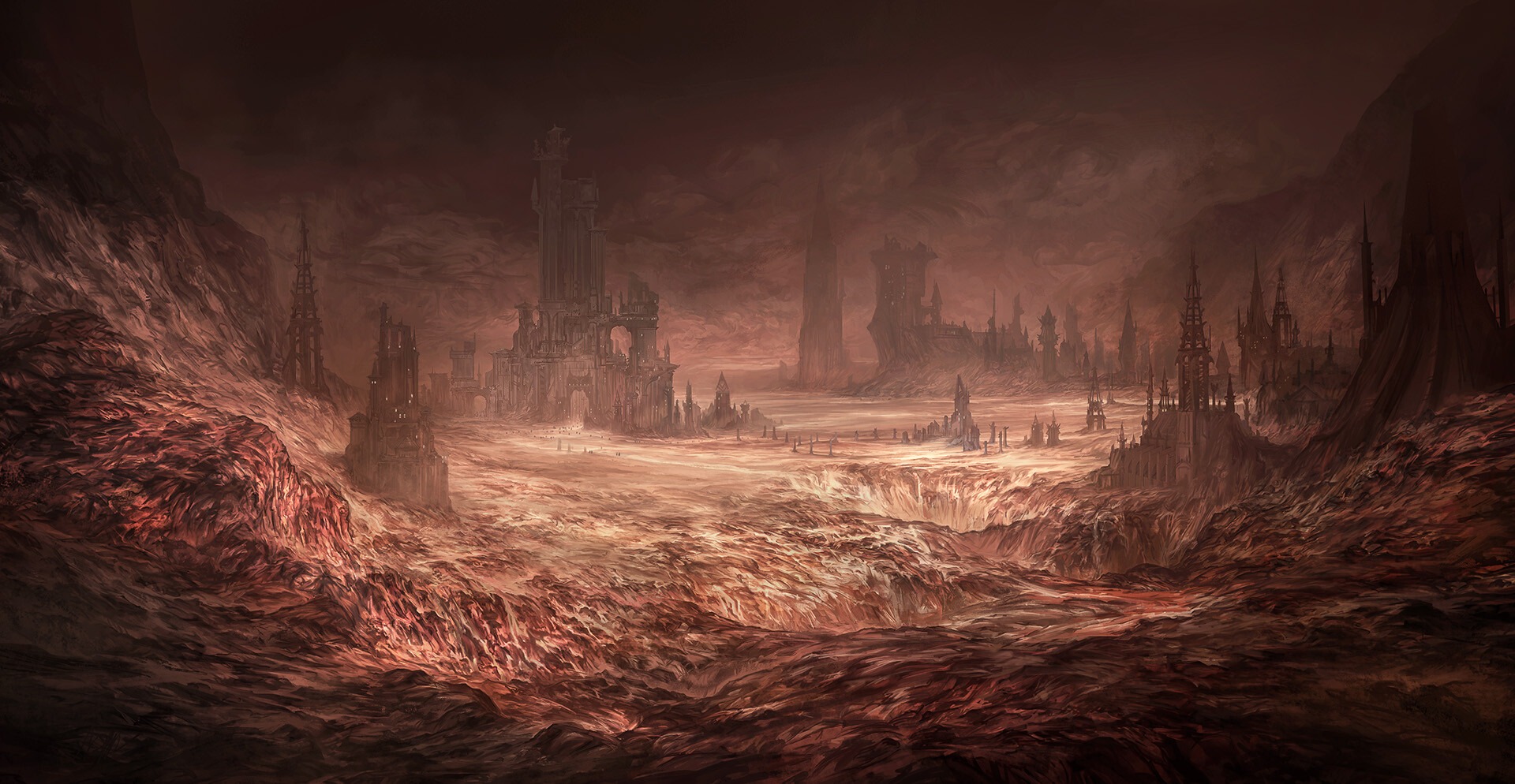 by Mike Luard
The Great Calamities   The Infernal Hour is but one of several events in world history that have recieved the designation of Great Calamity. It is a name reserved for only the greatest of disasters, events of such magnitude and destruction that they become burned into mankind's conscious. Individual events are designated with a name fitting their nature as well as the term "hour", being used to indicate that each event happened in but a short period of time. Notable events:

A worldwide inferno and yet only a small flicker when compared to Oblivion.
— Hrangen, King of the Rhovarin

Lonely Mountain   Without a doubt, the most famous natural feature of the Reach, Widow Peak casts a looming shadow over much of the surrounding land. Standing at over 4.000 meters tall, the mountain is among the tallest in all of Vardania and only overshadowed by the razor-like peaks of the Dawn Wall. Its name is derived from the fact that it stands isolated from all other mountain ranges, the nearest peak being over a weeks travel away.   However, the calm mountain contains a dangerous heart. Active fumaroles and hot springs, as well as the occasional ash cloud escaping near the peak, show all too clearly that the volcano under Widow Peak is still alive. A fact that concerns many a Vokarist as the last, and only known, eruption devastated nearly all of eastern Vardania. A similar eruption today would endanger tens of millions of people and threaten the breadbasket of over one-hundred million more. 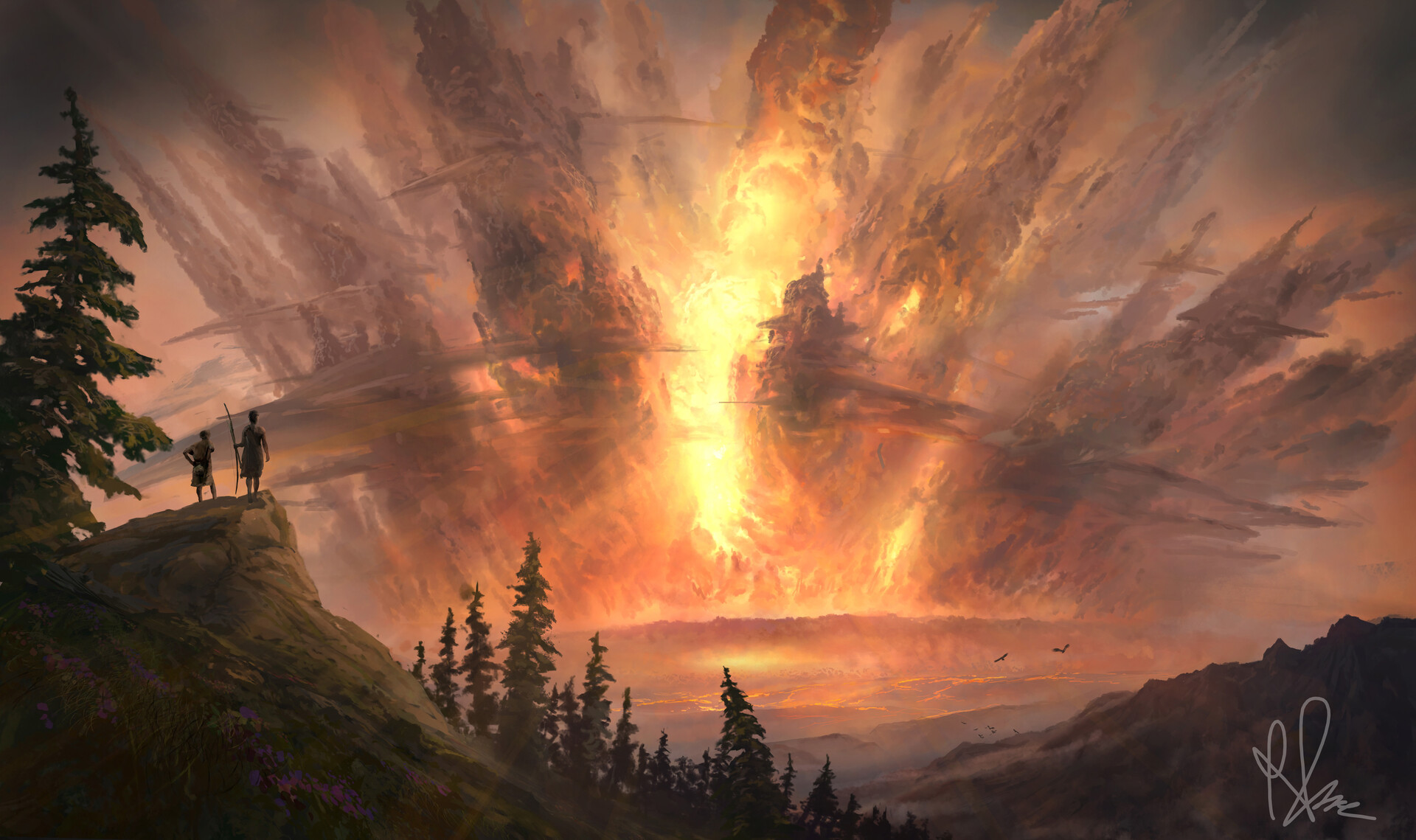 I would ask "Wow! How many cataclysms has this world gone through?" but you answered that.   I wonder what sort of machinations are happening under the surface of the world that would cause cataclysmic events with such clockwork efficiency... At least the times between events seems to be increasing.

This is a fascinating and terrifying disaster! That many volcanic eruptions... *shudders*. It's an insane undertaking to try and figure out the history of such a year, as I bet a lot of recorded history might have vanished in certain places of this world during this -- I applaud the worlds historians!   Another fantastic disaster, Dark! :)