Let The Waves Guide You

The Ayiobu River: The River of Dreams 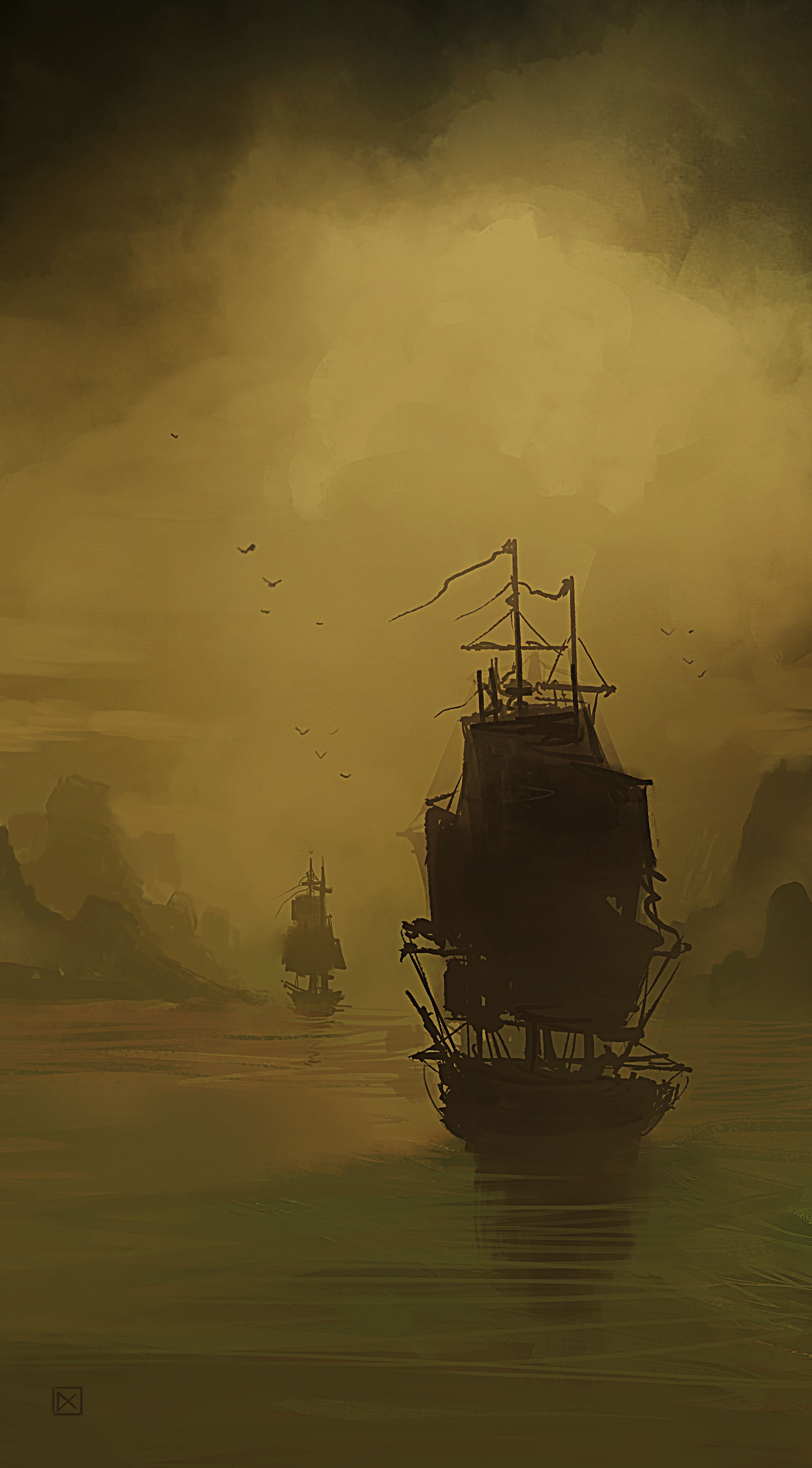 On The Water by Daniel Comerci

The Ayiobu River is one of the oldest rivers in Tetrora. It is a place that is surrounded by mystery and legend. Many who visit the river without a guide or a “true purpose” do not live long enough to go home.   Fishers are under constant watch by the races and creatures who live on either side of the river. Everything that lives in the area seems to exist to protect the river's secrets. However, the river is rarely explored. The eels inside will attack and eat anyone who dares enter the water. People travel down the river in large, tall boats to prevent attacks.

The Ayiobu River exists deep in the mountains of Aicatian Tribes. It is surrounded on either side by high mountains and dense trees. The trees leak spiritual energy and tower well over the river, often blocking the sun.   The mountains are covered in dense greenery that resembles grass but is thicker. The greenery follows the river and rides the mountains but stops as it gets further from the river. It is said that this greenery has healing properties.   Below the water, there is soft purple sand and soft, easily breakable rocks. As you travel down the river, you might find deep holes that have gone unexplored for quite some time.

Within the river, you will find Coyfish, a fish that is rather large and gives mana when eaten. These fish manage the sand below and is the reason the sand below is so soft. Coyfish soften the sand of any waterway they exist in.   Sand Dweller Crabs that have been seen elsewhere in the Megaverse can be found at the edge of the river. They go in and out of the river to hunt the smaller fish and bask in the sunlight. The other life in the water consists of Bayfish, ManaEels, and Golden Sunfish.   The Bayfish organize the rocks and can be seen tossing rocks that are too tough out of the water. Those rocks are used by insects and races that live around the river. ManaEels are hunters; they feast on anything that comes near or enters the water. ManaEels can lunge out of the water to grab anything on the sands around the river. They’re huge and provide mana when eaten. Golden Sunfish are rare and have been seen elsewhere in the Megaverse. Golden Sun Fish can be found digging the holes that have not been explored yet. 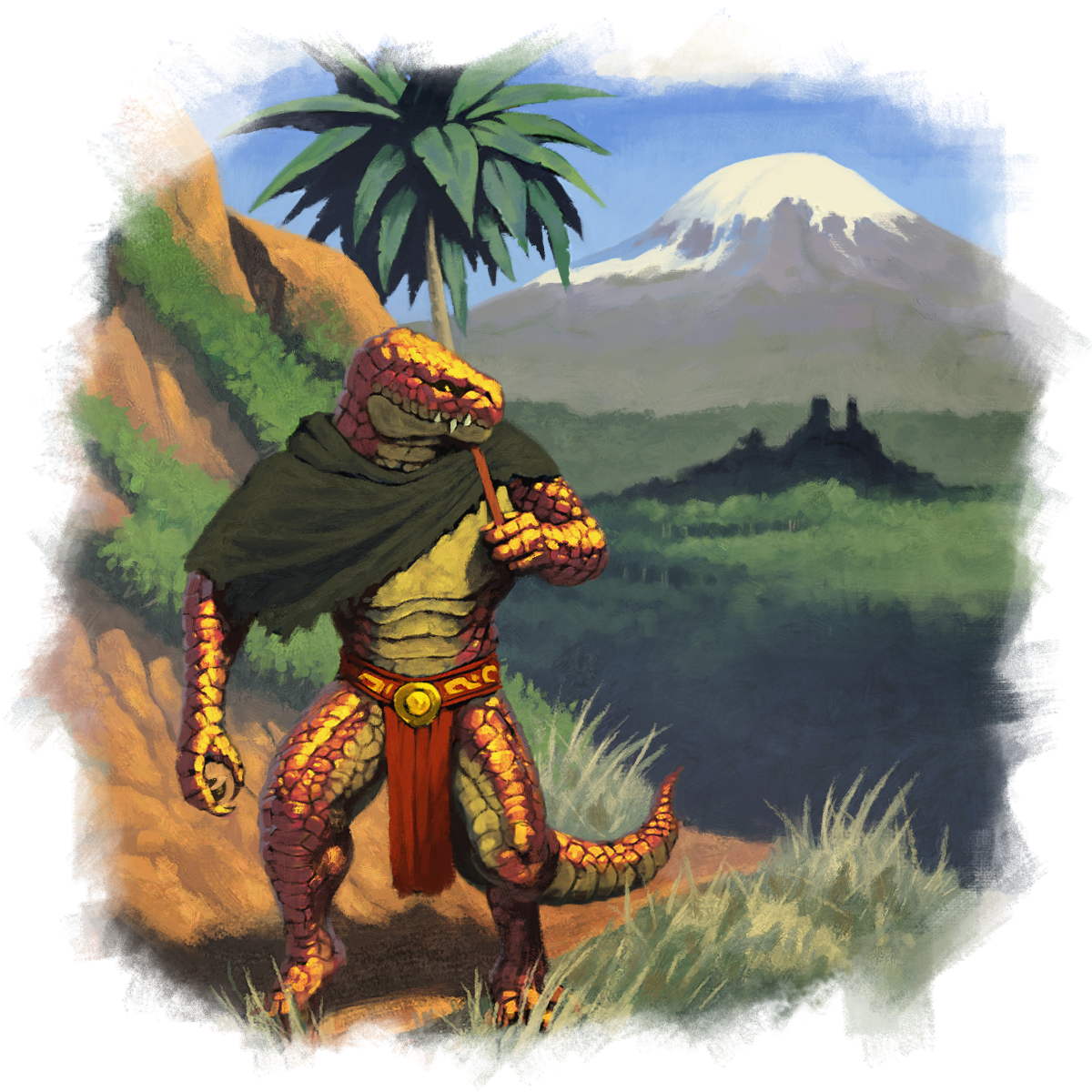 The Long Road by Dean Spencer
Around the river, you can find a variety of reptilian and amphibian races that protect the area. They are rarely seen, and those who cross their path do not live to tell the tale.   The races seem to live in harmony with each other to protect and preserve the nature of the river and the land that surrounds it. They allow fishers to travel and fish in the river, but if they're caught fishing too much, their boats vanish.     The people and creatures that live here have been observed in some detail by lucky adventurers. It seems the races and the beasts have an understanding of one another. Everything exists in a balance. Everything here understands that balance. Some say the animals here have extremely high intelligence.

As the seasons come and go, the ecosystem does not change much. The seasons do not completely affect the river, snow does not fall here much, and the temperature stays around the same in the surrounding area.

Every so often the river will glow baby blue because of the number of creatures that provide mana. During this time, fishers have reported hearing singing and seeing a dense fog gather around the river.

Within the water, you will find DumbiWeeds, a kind of seaweed that has superb healing properties. Around the DumbiWeeds you can find small fish that keep the base of the weeds clean: These fish are called DumbiGillis.   Flying above the water, you can find thick Ayiobu Beetles. These beetles are harmless unless provoked. They keep the fishermen in check, as well as the shells of the Sand Dweller Crab clean.   Around the river, you can spot purple flowers growing: These flowers have exactly one thorn and have been used to cure madness. They only grow on this river, and the locals are incredibly protective of these flowers.

Inside the river, you will find plants and animals that are capable of providing mana. The sand beneath the water is capable of healing wounds. The fish provide a good source of food, while the insects provide protection from the dark arts.   Around the river, you will find strong wood that is good for building houses if you're brave enough to cut the trees down. The water is pure and fresh. You could drink from it with no issue: There have not been tests done to see how this is possible. The residents believe the gods keep the water pure for them. 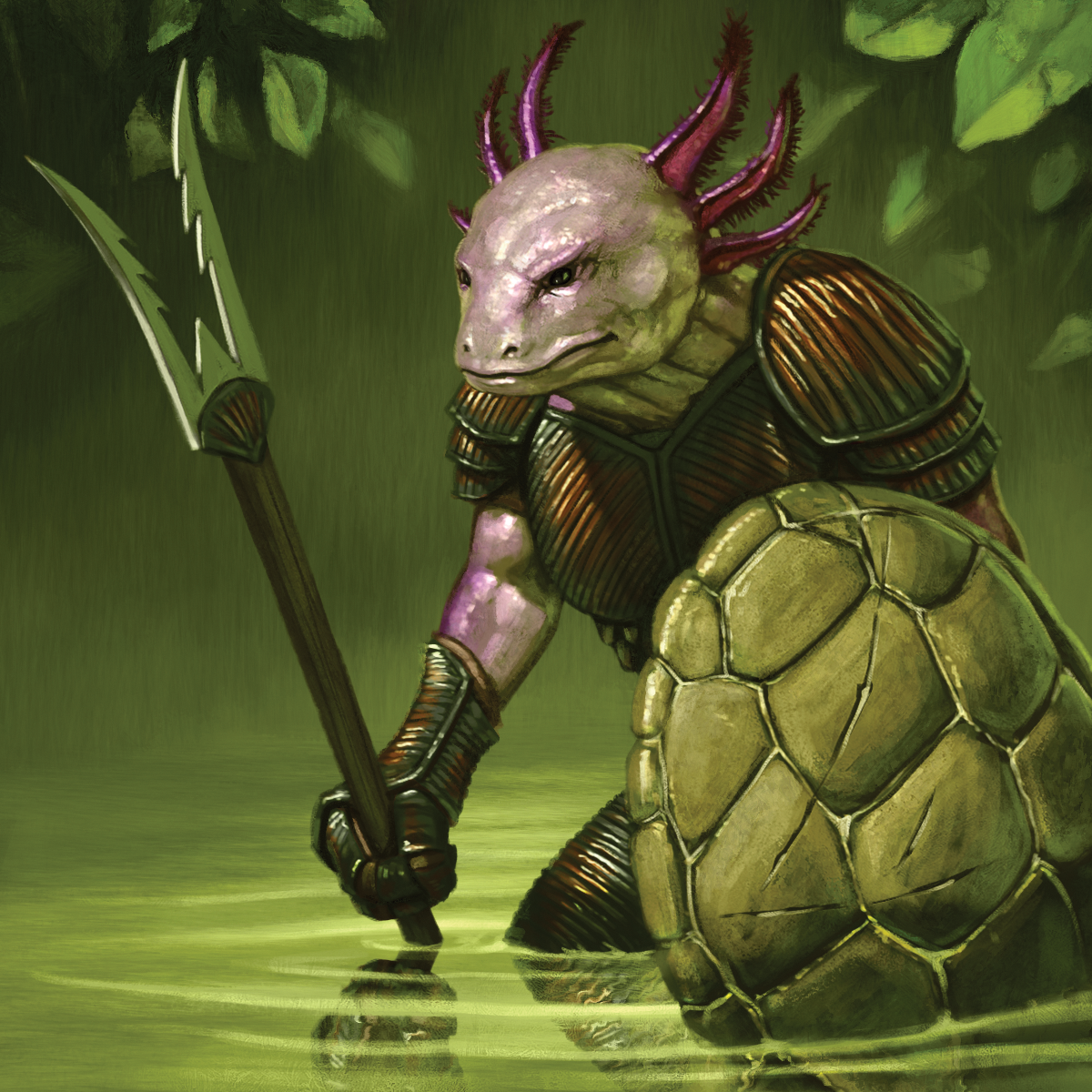 by Dean Spencer
The Ayiobu River is one of the oldest in Tetrora. It is well documented to have existed before the God Spheres were closed and before the old gods were whipped from the memory of all living things.   Many races that call the jungle that surrounds the river home use this river to get food and water: They let outsiders come here to gather some fish but do not allow them to overstay their welcome. Some outsiders do not venture to the Ayiobu River because the area that surrounds it is riddled with unknown temples. Some say the whole river is terrible luck and spits in the face of the Tetrora gods.   Wild Magic is common here, and it comes and goes as it pleases. Some people venture to the river to try and gather this magic; they never return. Tampering with the wildlife, cutting down trees, or going inside any of the many temples is a death sentence for outsiders.

1) Some of the temples around the river appear to be active. They are kept in fantastic condition, and the statues are regularly cleaned. However, most of these temples do not represent the Tetrora gods. Who is keeping up with the temples? No one knows for sure.   2) If you pee in the river, you will attract a swarm of DumbiGillis. Don’t sit still too long! They might try and take your shorts! No one knows why they are attracted to pee or like to take the shorts of their unsuspecting victims! If you look over the side of your boat, you might see a nest made from shorts! DumiGillis will even pull shorts off of dead bodies.   3) No one has ever explored the holes in the sand, but people who have seen them say they are bottomless. The fishermen who have seen them do not dare get into the water to look closer.
When I write about alternate history names and places might be changed. The Megaverse has no affiliation with these places. Names of important people, like George Washington, have not been changed.
Bonus Location

Join Spectrals Megaverse: Beta Discord!
Spectrals Megaverse 2020-2021 All Rights Reserved   Art credit is given in the pictures, even if it was made in Adobe Spark. If you want anything removed, please get in touch with me directly.   The Planescapes is fictional and has no ties to real people; I used real place names when creating some of these universes.   Please do not use any art I had commissioned or use any of my locations or characters. Any custom monsters are strictly off-limits; as a rule of thumb, please contact me if you want to use something.
Article template
Geographic Location
World
Spectrals Megaverse: Beta
Category
Bonus Location in Locations
Author
Spectral42
Publication Date
13 May, 2022
Creation Date
13 May, 2022
Last Update Date
14 May, 2022
Visibility
Public
Views
102
Favorites
10
Comments
3

Kind of a scary place to visit! I wouldn't want to meet those eels. And the DumbiGillis sound like quite the pests, although it's kind of cute that they make homes out of shorts! XD 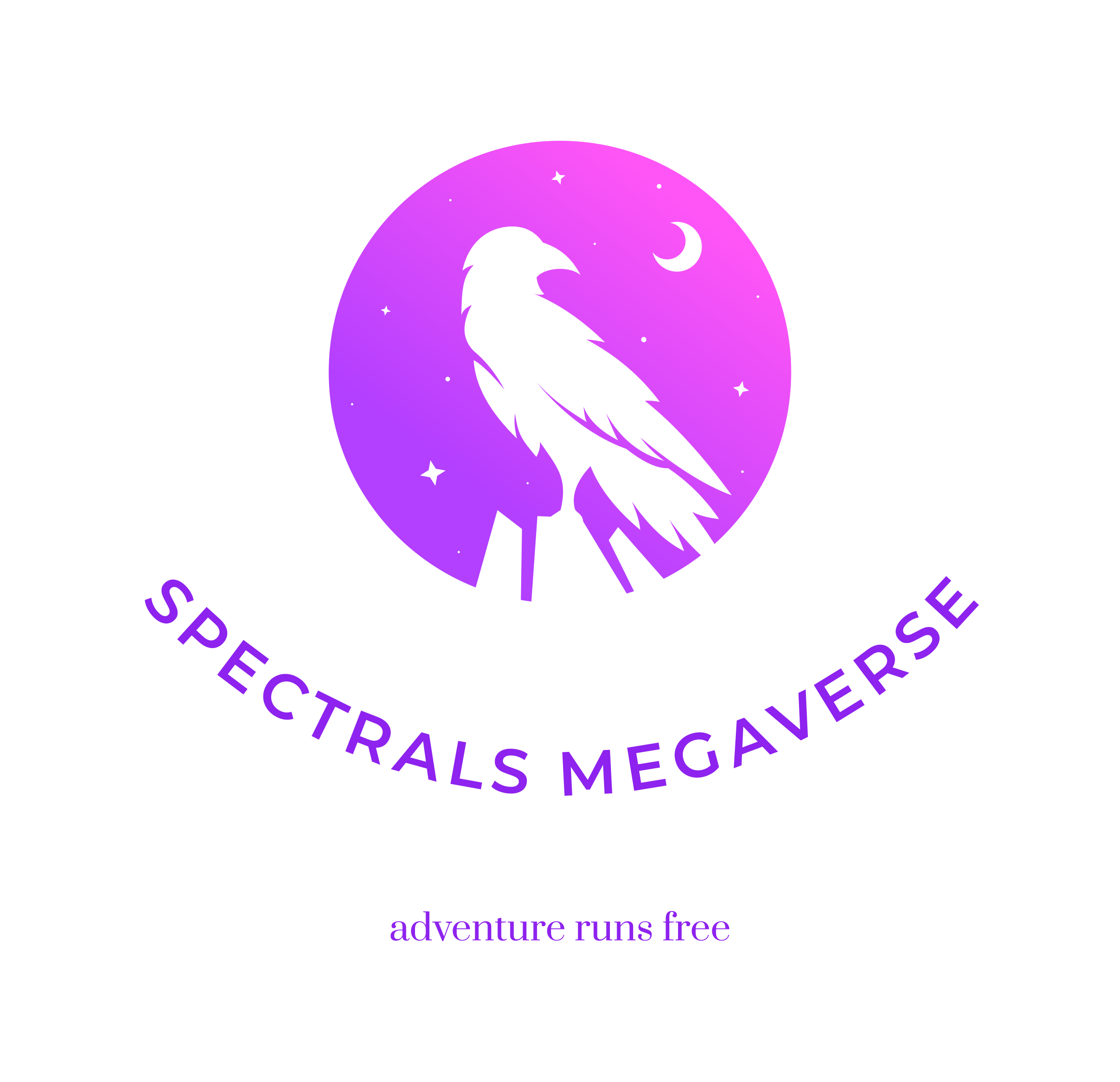 They are quite the pests for sure! If you can catch an eel they taste really good.

Sounds like an intriguing river but also dangerous to try to get around it . Also like the small addition of the shorts stealing fish :p

This place sounds terrifying... Also: So rude that they won't let you visit the temples! o_o I have half a mind to complain about them.

Oh boy! The United Tribes do not take kindly to complaining. Maybe if you're sneaky enough you can get into one of the temples?