Nam is the capital of Oskad and is the largest and richest industrial and trade city of the world. It is located at the end of the large desert named the Barrens in the center of the continent of Amfli.

The older parts of Nam sit on a plateau about 400m above sea level. To the south of the Lahu mountains and to the north of Mount Samu. It’s supplied by a couple of smaller rivers and sits at the crossroads of several old trading routes.   Today the city has 6 boroughs, 2 of them consists entirely of industries while the other 4 is a mix between industries, living areas, and commercial sites.
Meia Is the oldest part of the city and it encompasses the oldest factories as well as an old bazaar area and living quarters. This borough is the northernmost part of the city and is actually split up into three parts by two rivers.   Sunp and Mora consist entirely of industries and they sit on either side of Meia. While the other 3 boroughs sit across them towards the south.

Carbon dating suggests that the area has been occupied for the last 8000 years. Some of the earliest written records from the area are from around 3000 years ago and it mentions one of the old kings, Elanora.

Nam has many industries; tourism, agriculture, movies, chemicals, and technology to mention a few. Though, the biggest industries of Nam are clothes and health products.

Nam is the largest producer of clothes and is called the Fashion capital of the world. Many of the big labels have their factories and outlet stores in Nam.

Makeup, skincare, health food, and hair care is also a large industry in Nam and makeup and hair care for all skin colors and hair textures are produced here.
There have been a couple of controversies regarding the waste products of the older factories. Where the waste have been released into the freshwater reserves and rivers.

Nam is one of the oldest cities on Amfli and as such the plumbing is bad in the older parts of the town and there is also logistics problems for the waste and incoming materials.   Waste handling, plumbing, public transport, and road planning are a lot better in the newer boroughs and there are groups who are fighting to get the older boroughs rebuilt and modernized. While older groups would like to keep the city as it is because of the cultural heritage.

Wool and cotton are the largest resources produced in and around Nam. But there is also, minerals, ore, meat, fruits, and many more resources. 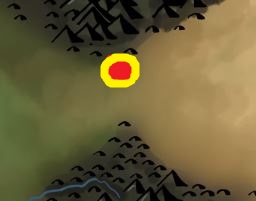 Artwork and content, if nothing else is stated, is ©️ BasicDragon, 2018 - 2019
You are free to do fanworks and share the free content, you can not share subscribed material. You may not use the material for commercial purposes.