"The goddess have laid out our path for us, clear in the message she has given us. Trust in her words and her teachings! Glory be to those who do right and just, and death to those who would be unjust!

The Flames of Justice shall reveal the unjust among us, and the Scales will weigh their hearts. Those found to harbor injustice shall be struck down by the Swords!"

Val Kvanda is the religious capital of the entire eastern world, hosting the Cathedral of Eri. It is an enormous city, nestled on a small peninsula in the Kfandr Bay in the Empire of Kfandr.

The city began its existence hundreds of years ago as a simple monastery dedicated to the goddess Eri. Over the centuries, the monastery has grown to a grand city built in honor of her.

Today, Val Kvanda is the world's largest and grandest city and also the largest port city in all of Arjin. Enormous amounts of wares are passing through the port of Val Kvanda on a daily basis.

The city is also hosting a lot of visitors, seeing as the cathedral is a holy place for people making pilgrimages to see the cathedral and to feel Eri's presence.

Gimroans from all over the Gimroan Basin come to visit Val Kvanda and for this reason you can find absolutely anyone here, from the lowliest peasant to the grandest of kings. It makes no difference here.

The actual citizens of Val Kvanda are overall wealthy people and as expected, a lot of them hold some form of religious position.

The city is officially run by the empress but since the empress resides in the capital city of Dorholm, she has a steward in place to take care of business.

This steward used to be the consul of Ývingir, the kallas (a duchy in the empire) that houses the city. But after the inauguration of the empress, she quickly moved to replace the steward with High Archon Vrækæ, the head of the Swords of Justice. He now rules the city with an iron fist, with the empress' blessing.

The city has two large walls, one protecting the religious core of the city, where the old monastery once stood. It's now the location of the cathedral and the entire core of the city is surrounded by a massive wall with a single gatehouse on the northern part.

The outer wall protects the non-religious part of the city core, allowing for the richer citizens to feel secure. Most of the actual city is outside the outer walls, forming the smaller hamlets and common-folk areas, slowly giving way to farmlands.

Being a religious nexus, most of what goes on in the city is in some way connected to religion. There are yearly conferences for religious leaders, seminars and pilgrimages in the city, as well as weekly sermons by the High Archon.

The second main function of the city is the gigantic port, where hundreds of vessels make birth each month, transporting goods both to Celenia and to other nations with whom the kfandrians make trade. 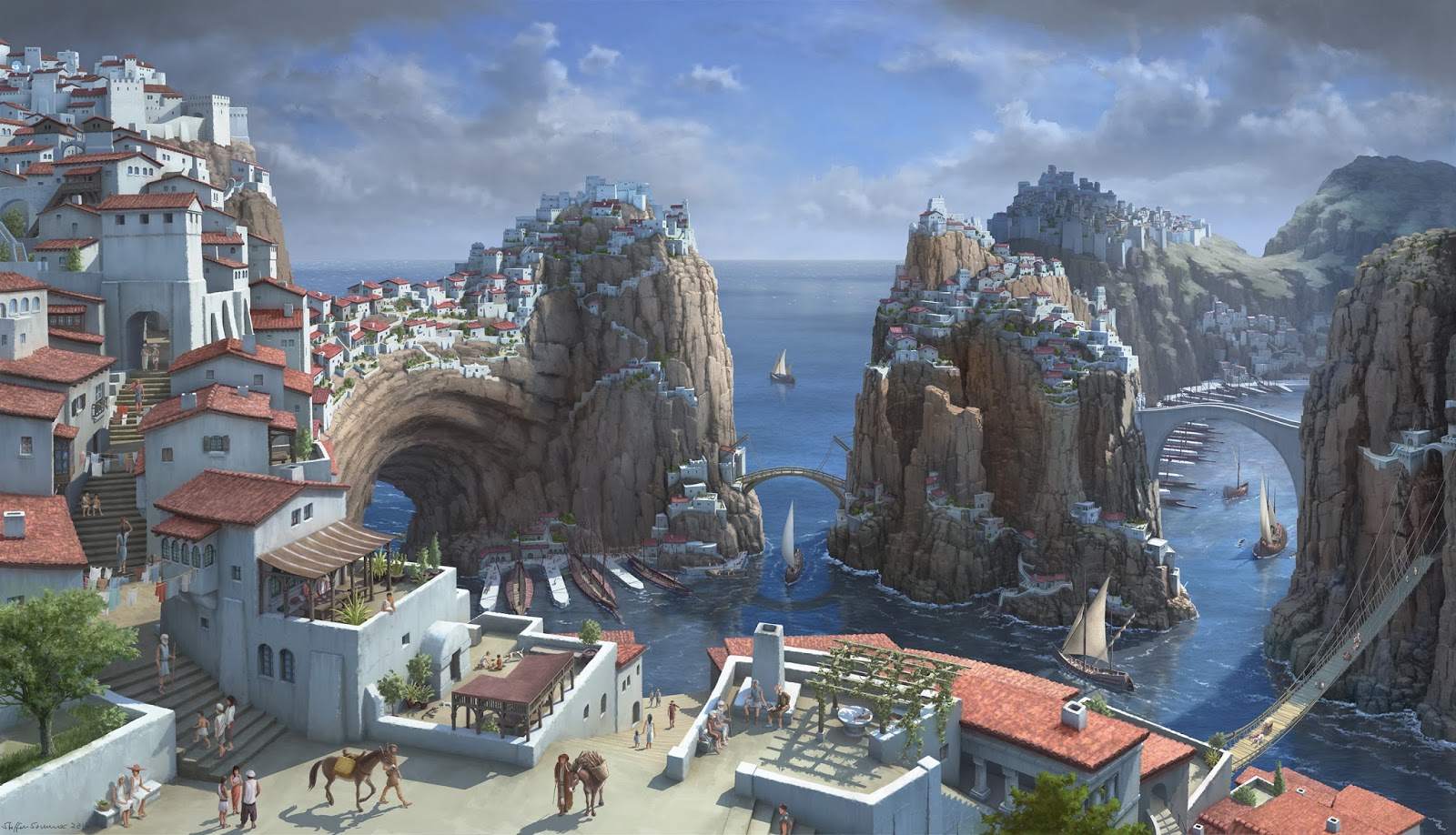 The ostentatious cathedral dominates the the view, being built on a hill in the center of the city. It's surrounded by a massive wall that forms three separate baileys inside, protecting it from assault.

The city itself is built with architectural thought behind it which belies its origins as a growing city. The oldest parts of the city are more akin to a larger town, having a couple of main roads running about, but mostly alleyways and haphazardly placed buildings.

The more modern parts of the city, however, are built with thought behind it. These parts have actual districts and neighborhoods and a paved road network connecting these areas. Most necessary services can be found in each district, although more specialised crafters and services are only available in the city core.

In the furthest south of the city you find the most breathtaking architecture, as the city itself has grown out on top of the bluffs and mesas of the bay. This area of the city is covered in small homes, watchtowers and magnificent bridges spanning between the mesas. At the bottom, near the sea itself are the giant shipyards of Kfandr, as well as the entryway into the port of Val Kvanda.

Nestled between the Gimroan basin and the Morvátian peninsula, the Kfandr bay is the major connection to the expansive ocean for the nations of the basin.

A gigantic, ostentatious cathedral built in the honor of Eri, the goddess of Balance and Justice.