Ósleiðr is one of the oldest languages in the world and as far as historians can tell, was brought to the world from the Winterweald when the vindral and illim marched south into the Kfandr Bay many hundreds of years ago, together with what was then proto-qaj.

Both of the languages share a few similarities such as the voiceless alveolar lateral affricate sound tlh, but are largely utterly different, which is why most linguists agree that the two languages are not stemmed from a common ancestor language, but instead developed separately and then exchanged words, sounds and meanings from each other over time.

Ósleiðr is a language that is very poetic and has many synonyms and kennings for different words, allowing for great flexibility in prose and is spoken in almost the entirety of Gimroen and primarily in the Empire of Kfandr.

Ósleiðr is written with runes, although no one carves them into stone anymore. There are many regional variations of how to write the runes, but most agree on their general shape.

One somewhat obnoxious detail of the runes is that they have no distinction of long and short vowels or between voiced and unvoiced consonants. So with Ósleiðr runes, 'k' and 'g' are represented by the same rune, as is ''v' and 'f', for instance.

Ósleiðrs phonology is reminiscent of modern icelandic in our world.

The b sound is pronounced exactly as in english. In some cases (when doubled inside a word, for instance) it shifts to be an aspirated p sound. "Kabbúr" -> "Kahpur"

The d sound is pronounced like the common western "d". It's a voiced alveolar stop. However, when inside a word and doubled ("dd") it becomes a regular english t sound. "dóddír" -> "dotir"

The "f" letter fills two roles. In the beginning of a word, it's a voiceless labiodental fricative precisely like the english f sound in "fish" and "feather". If it's found inside a word, immediately following another letter, it's instead a voiced labiodental fricative, thus forming a v sound, like in "voice" or "value". Compare for instance "falgr", pronounced "falger" with "ýfir" pronounced "yyvirr". This letter also has a very interesting interaction with the letter "h". See below.

A voiced velar stop, like in english "go" or "get". Never as in english "gem" or "geode". However, if the letter is doubled ("gg") it shifts to a voiced velar fricative, similar to how a french would pronounce "r". Think trying to say the german name "Bach", but with your vocal cords vibrating. In some dialects, particularly in the north, the "gg" is instead pronounced similar to a "w", a sort of "oe" diphthong.

In these cases, the h sound shifts more towards an hj sound, like in english "Houston".

If what follows after the h sound is a v sound (the letter "f"), it becomes a clearly pronounced aspiration in front of an "oe" sound, like if you would say "what" with a puff of breath just before the "w" in english. Sort of like old english pronounciation of "what", "when", "which" and similar words beginning with "wh". Be careful not to slide this into an "hv" sound. He sound following the "h" aspiration is a vowel diphthong, not a consonant.

The j sound is a palatal approximant, similar to how english would pronounce "y" in "yes". Never as "j" in "judge".

A voiceless velar stop, similar to how "k" and "c" are generally used interchangeably in english. "Cat", "case", "keen", "key" etc. When the letter is doubled inside a word, it's pronounced with a clear aspiration just before the letter. So "kk" would be pronounced "hk". "Ekk" -> "Ehk".

Alveolar lateral approximant. That's a mouthful. What it means is that the l sound is pronounced with the tounge tip touching the back of your front teeth and the hard alveola behind the teeth. However, if doubled it changes. So "ll" would be pronounced like a voiceless alveolar lateral affricate instead. This means that you make a sound similar to an l sound but you try to say "t" at the exact same time, expelling air over the sides of your tounge. This is the same sound as the "tlh" of qaj, or the double "ll" of modern icelandic.

In actual writing script, this sound has its own letter, different from "l".

Pronounced like in english. When combined with "g" it forms the uvular nasal "ng" sound. This sound may never start a word.

The r sound in ósleiðr is tapped when written alone, and if it's ever doubled, it's a trilled r sound. It's never garbled like in french or as in american english.

Always pronounced like a voiceless alveolar fricative, never a voiced sound. So it's always "sit" or "say", not a z-like sound like in "zebra".

Pronounced the same as english does it except when doubled inside a word, in which case it, like "k", receives a clear exhale in front of it. "Attur" -> "Ahtur".

This letter, thorn, represents the "th" sound in "thing", "think" and "theory". It's a voiceless dental fricative.

Eth is the companion of the above letter, being the voiced dental fricative as in "this", "that" and "them".

Vowels in ósleiðr are somewhat complex, as they have short and long forms, denoted by an apostrophe (é). Think of it as the difference between the u sound in "root" (u) and "rude" (ú). The first being short, the second the long one.

The a sound in ósleiðr is an open back unrounded vowel, pronounced like "a" in "father".

The ash is pronounced just like the "a" in the word "ash". It's a sound somewhere inbetween "a" and "e", called a near-open front unrounded vowel. Nordic speakers may recognize this sound as "ä".

The e sound is like english "pet". This is called an open-mid front unrounded vowel.

The i sound is like in "heat", a close front unrounded vowel.

In linguistics you would call this a close back rounded vowel. If it's lengthened (ó) it changes as compared to other vowels that simply become longer. The "o" when lengthened to "ó" become an open back rounded vowel. This sound really isn't common in english. The closest you'd get is a New Jersey pronounciation of "coffee" or in regular english "caught". In nordic languages this sound is usually written as "å".

This is a close central unrounded vowel. Similar to how english might pronounce "root".

This sound is familiar to nordic speakers, but it's somewhat difficult to explain to an english speaker. It's similar to how a surfer would pronounced "dude". It's a sound you get when saying the "i" above, but rounding your lips. In linguistics it's called a close front rounded vowel.

Close-mid front rounded vowel, very familiar to nordic speakers. Sometimes written as ø or œ in modern languages. The closest you'd get as an english speaker imagining this sound would be Arnold Schwarznegger trying to say "bird". 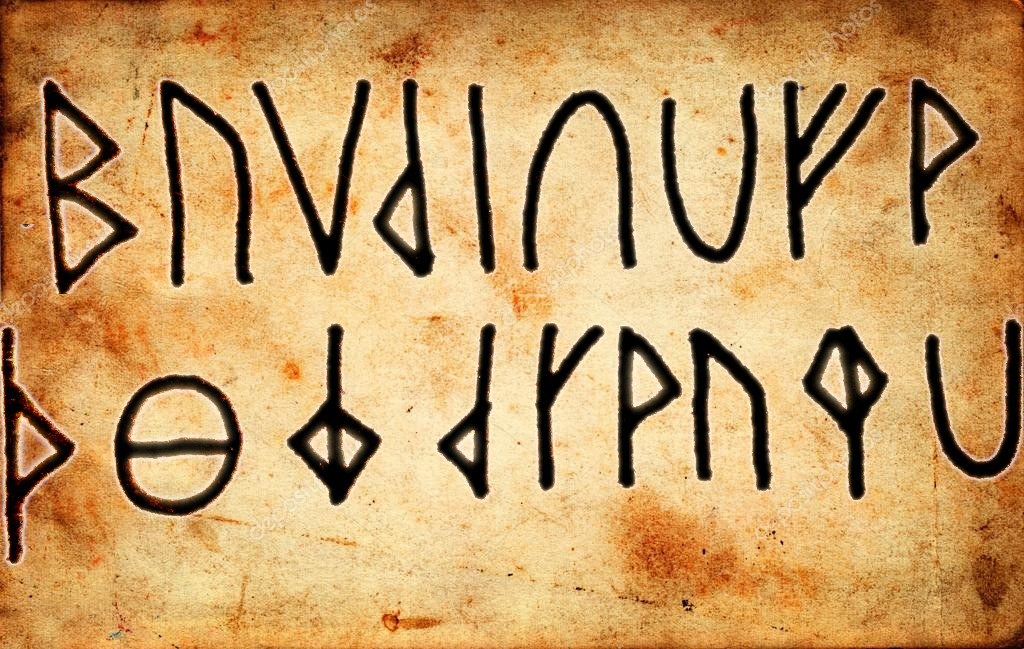 Ósleiðr morphology is easily the most complex of the three major languages of the world, mostly because it is not agglutinative in the same way the other two languages are. Instead of using pre- and suffixes and "gluing" words together, ósleiðr is instead a fusional language where each morpheme can be reused and carry multiple meanings depending on how it's structured and where it is in each sentence.

Verbs and objects are sometimes irregular, sometimes suffixed and there's no one rule to describe how they're changed depending on such things as tense and case but there are general guidelines to describe such things as denoting direct or indirect form (the vs a/an in english), genitive case, plural and the basic tenses.

The word gódre is the past form of gódr (to give). It's an example of a word that simply gains a suffix for tense. The past tense suffix is generally -dre, and since it already ends in -dr, you simply add the extra "e" for past tense. Other words, like ór (to be) is irregular and changes form entirely with tense, going to hfær in past tense. Knowing which words are regular and irregular is the greatest challenge of learning the language.

Plural is denoted with adding -ar or -r to the end of the word, depending on if the word ends in -r or not. If it does, you add -ar, if not, you simply add -r. Ósleiðr also has two different plurals, one being the dual form and one being the general plural. The -ar ending is for general plural, while for dual form you add -hfó if the word does not end with -r, and replace the -r with -erhfó if it does.

Genitive case is somewhat complex, as it depends on if you're speaking about a named person or an object, and what sex that person is. Genitive markers also always follow after the owned object. For instance, to say "My cliff", you would say "Kæll mínæ" (lit. "cliff (of) mine") if I were a man, and "Kæll mína" if I were a woman. To denote an object or non-named individual owning something, you add -gi to the end of the owner and place them immediately following the owned object. Such as in "hfaldr gestargi" (lit. "(the) horn (of the) stranger").

Basic pronouns also change shape depending on their role in the sentence (subject or object). For instance, "I" (ék) changes to mík when it's an object. So "I am fine" would be "ék ór hfæl", but "He gave the ball to me" would be "Hónn gódre knöttra ann mík." So ék changed to mík because "I" was an object in the sentence.

Negation is performed by putting the prefix ei- to a word, so for instance Þan honn skorðum ússe eivingðum. "Because you (royal) wish us not-to-expand"

The entire vocabulary would be too great to write down here, but here follows a few examples. 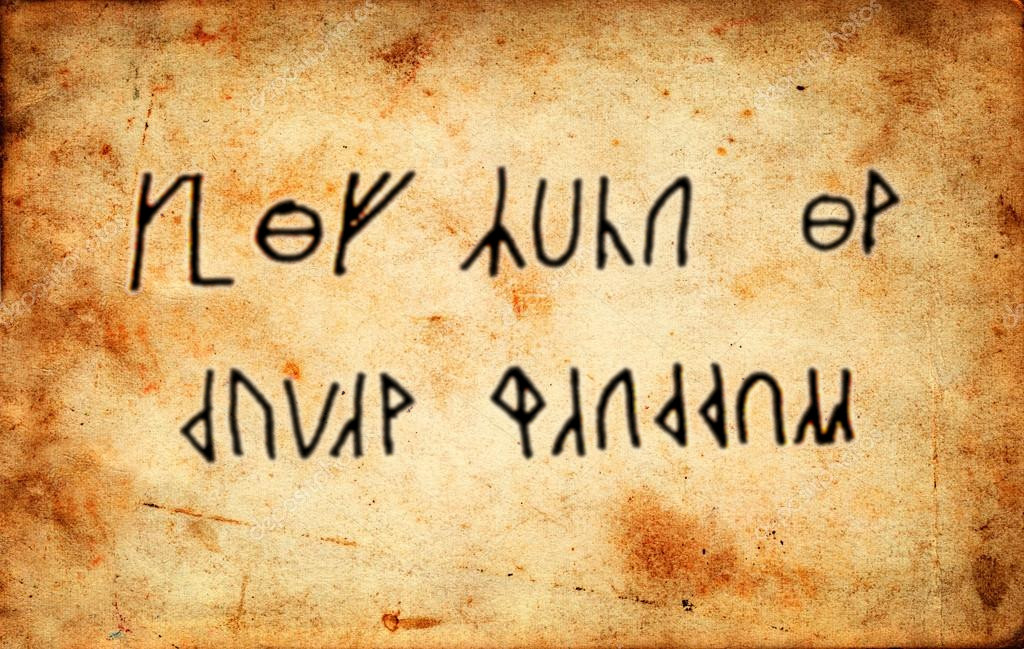 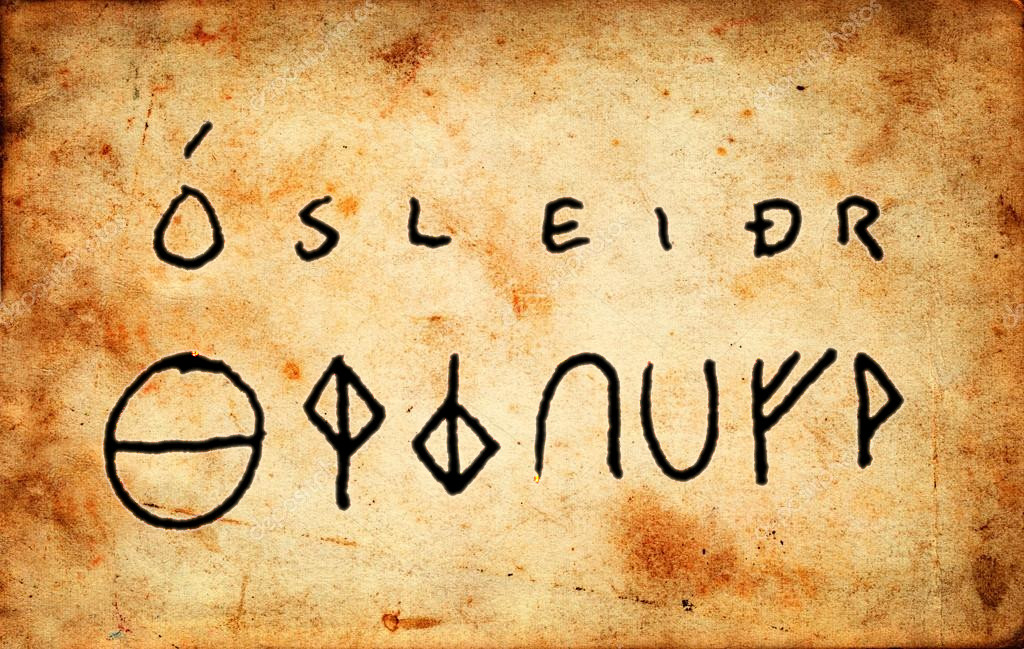