The Hessak are a race of lizardfolk who live in a tribal society centered around powerful matriarchs. They live primarily on the islands around Simue and in the jungles of Tabut-Heda.   While the Hessak are proficient seamen they will not often travel out onto open water, but instead stay in the murky jungles and hunt for prey in the rivers and marshlands that can be found there. The only place where one might encounter Hessak on the open seas is in the Hessak Narrows, a section of open water separating Simue from the Tabut-Heda islands. Hessak will frequently travel across the narrows to reach hunting grounds on the other side, or to make war or peace with tribes on the other side. 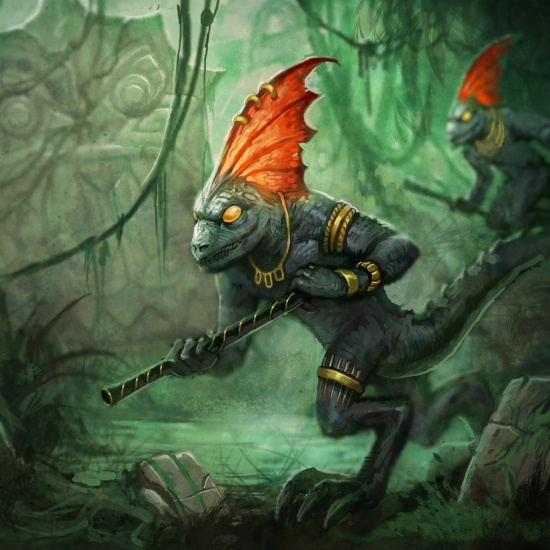 A pair of Hessak jungle-runners, a hunter caste Hessak.
Hessak society is fairly straightforward with a matriarch at the very top, her sentinels below her, the warriors below them and then finally the different worker castes. The entire society is neatly ordered into biological castes, where one is quite literally born into one's role in the Hessak society. There is almost no sense of individuality among the Hessak. They, for the most part, see themselves as nothing more than a part of the tribe, like willing worker drones among bees.   The castes are arranged into groups of functions rather than hierarchy. Most castes are worker castes, developed and evolved to perform a single task or a group of tasks, single-mindedly devoted to their purpose and with very little intelligence and individuality.   More complex castes, such as the warrior and sentinel castes are above the workers on the tribal ladder and are more intelligent and have a greater sense of individuality than the workers. Particularly the matriarchs are vastly more intelligent than the worker castes.

The Hessak have shown no interest in interacting with other species and have been displaying very territorial tendencies when outsiders enter their territory. The worker castes, for the most part, tend to ignore any visitors who do not display aggressive tendencies or interfere with their duties. Warriors will also generally ignore outsiders unless they enter into the tribe's territory or display any kind of aggression.   The best way to avoid conflict with Hessak is to simply bow one's head, look at the ground and back off slowly. In most cases, unless one is found far inside the tribe's territories, the Hessak will leave you be. 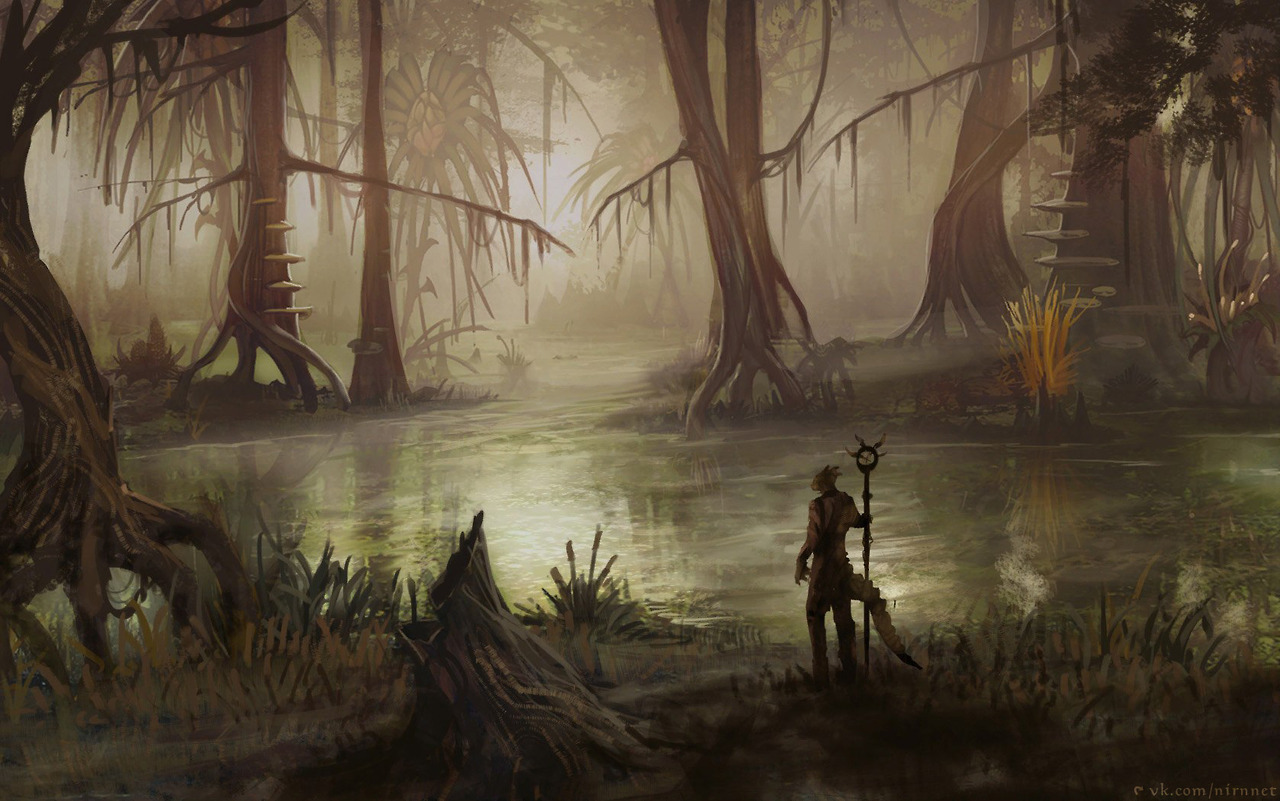 A Hessak warrior caste on guard outside the village.

The worker castes of Hessak vary a lot in form, function and color. They all have biological traits that help them fulfill their intended role, be it building, transporting, hunting or tending. In general, worker castes are much smaller than the warriors and sentinels, usually standing only 3-4 feet high from the ground. Most of the worker caste have digitigrade legs. Workers, in general, do not have great individual intelligence nor any kind of semblance of identity. They do not even have a biological gender. They exist to serve the matriarch. Worker castes can speak Hessak language, but only at a most basic level. 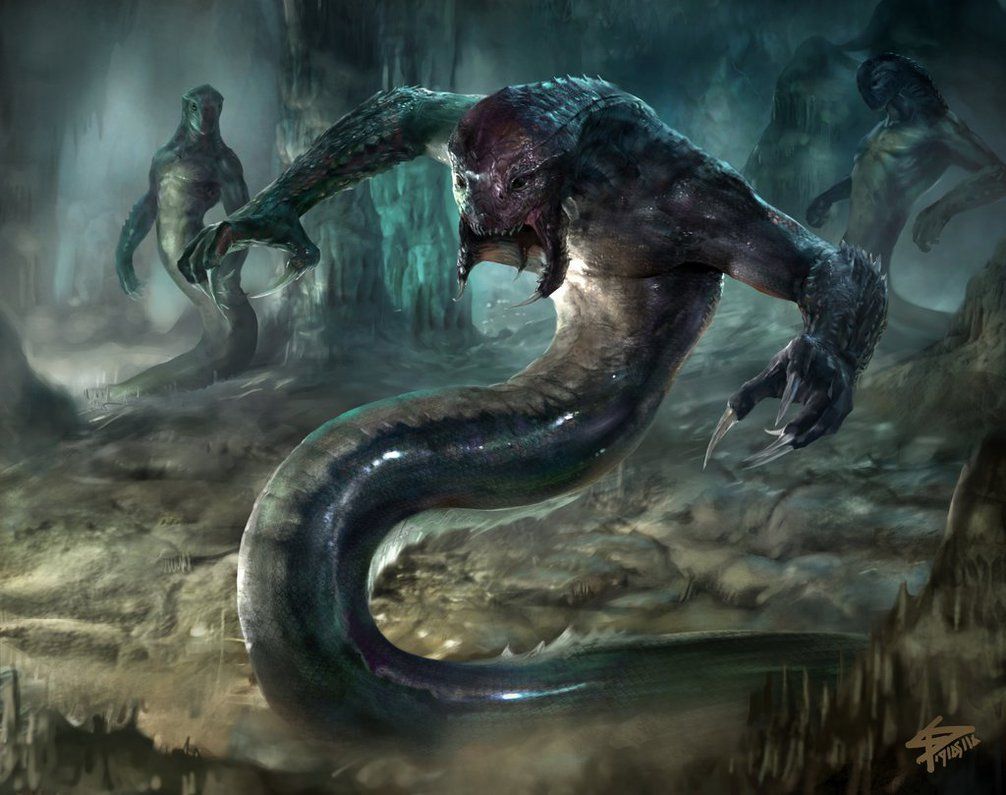 Dark Erechtheid Naga by Herckeim
The warrior caste is the most versatile caste and are quite a bit more intelligent than the worker caste. They are capable of thinking tactically and can use weapons and armor and understand their function. These Hessak are usually tall, standing the full height of an adult Illim. They also possess the ability to speak and usually communicate with their comrades during combat.   The sentinel caste are terrifying hulks of muscle, claws and teeth. Instead of legs these monsters possess a strong snake body from their waist down. The can fight with weapons, but usually do not need to as their insane strength and resilience allow them to combat any foe with just their teeth and claws. 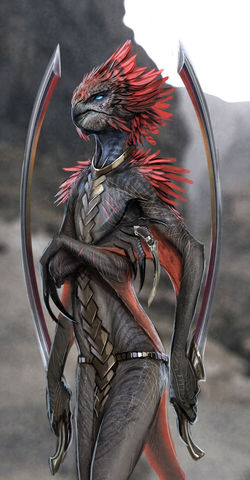 Matriarch Khedira by Nebezial
The matriarchs are the top of the caste and usually a tribe will only have a single matriarch ruling them. The matriarch's function is to lead the tribe to prosperity and she is also the only female in the tribe. She will lay hundreds of eggs after mating with a warrior who has gained her favor, usually through combat. These eggs will birth new workers and warriors, but generally not any sentinels nor other matriarchs. The matriarch can alter her body chemistry, increasing the chance for sentinel births and also to spawn a new matriarch.   A matriarch will only deliberately spawn new sentinels should her own be destroyed or if the tribe grows large enough to warrant a great personal cadre. She will only birth a new matriarch if she is becoming of old age and is about to die. Without a matriarch to guide it, the tribe will die. Should another matriarch be born from an egg out of chance, the matriarch fledgling will be sent from the village, left to fend for herself.   Matriarchs are very intelligent and capable of communicating verbally and even learn other languages and skills. They are quite a bit more intelligent than Dru'un and they are capable of both making and using tools, as well as weapons. Matriarchs possess the knowledge of metalshaping and can make elegant slashing weapons out of bronze, iron and even steel, although the Hessak do not possess the technology to make steel of their own.   Matriarchs differ greatly from other Hessak and look most like warriors, but are thinner, taller and have four arms. In addition they possess body feathers in bright colors to display their status. Their faces is are also more birdlike than lizardlike with a pronounced bony beak. 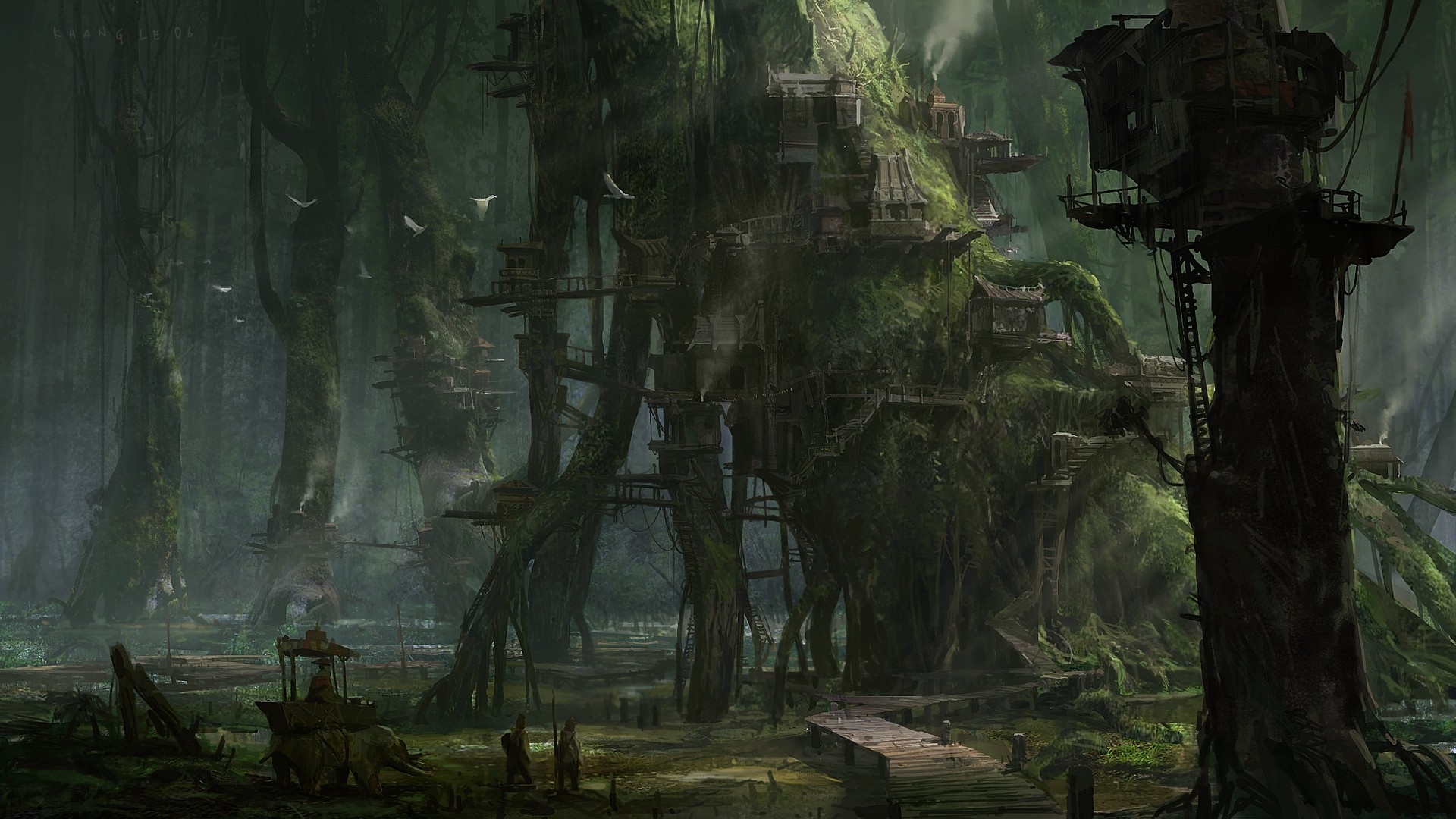 Matriarchs will, when born, instinctively search for a very large tree to occupy. This tree will be the center of the Hessak tribe and the village will grow around the tree and often on the tree itself. Up here, the matriarch will feed upon bats, insects, birds and other creatures who live in the trees and when she is six years of age, she will venture out to find another tribe and either seduce a warrior of the tribe to impregnate her, or challenge the ruling matriarch to gain access to a warrior.   Many matriarchs are killed in this attempt to find a mate, but those who survive return to their tree to lay their eggs, and such is a new tribe born. 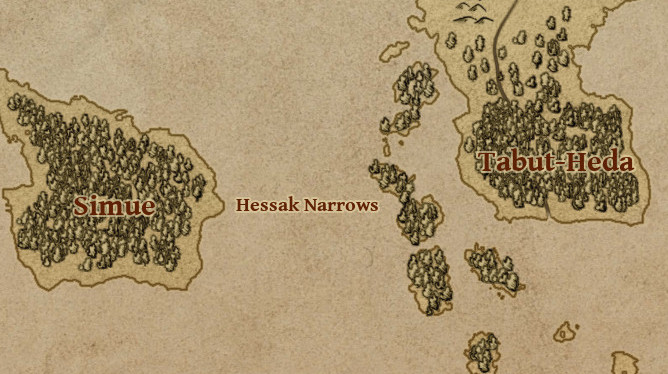 The Hessak Narrows by Tobias Linder
Genetic Ancestor(s)
Lifespan
5-20 years (matriarchs can live up to 140 years)
Perception and sensory capabilities
Hessak are incredibly sensitive to vibrations, winds and heat differentials. Some castes also possess a strong sense of smell. They flick their forked tongue into the air and then stick it into a specialised organ in the roof of their mouth. This way they can "taste" smells, giving them a far more vivid experience of the smell.   They however lack an external olfactory organ and can therefore not distinguish direction of smells without taking multiple samples of air. For this reason a Hessak who has discovered a new smell must stop and remain stationary, only turning its head occasionally to take in a new sample of air in order to determine direction.   Ecology and habitat
Hessak are cold-blooded and require great heat to thrive, which is why they are limited to the very southern parts of Arjin. They simply cannot survive if the temperature drops too low.   Diet
Hessak eat almost everything, but prefer meat, fish and insects, which they hunt in the jungles.   Mental capabilities
Hessak are in general not very bright individually, but a tribe of Hessak can be considered an almost hive-like society where the society as a whole is fairly intelligent and capable of long-term planning.   Geographical distribution
The Hessak, due to their complete reliance on high temperatures, are only found on the southern islands, Simue and in the jungles of Tabut-Heda.   Language and communication
The Hessak speak a language that hasn't been given another name than Hessak. It is a relatively simple language verbally, involving a lot of s-like sounds, likely due to the Hessak's anatomy. Most of the language is however performed with pheromones, body movements and clicks.   Common names
Asak
Heu
Kakku
Kassa
Nyetu
Sajiik
Sitlik
Vetak

Fantastic article! I really like the amount of effort and detail you put into describing the hessak and their organizational structure. I personally liked the analogues to bees and the hivemind like society. Besides the artwork was great too. Keep up the good work!