The goddess of Balance and Justice. 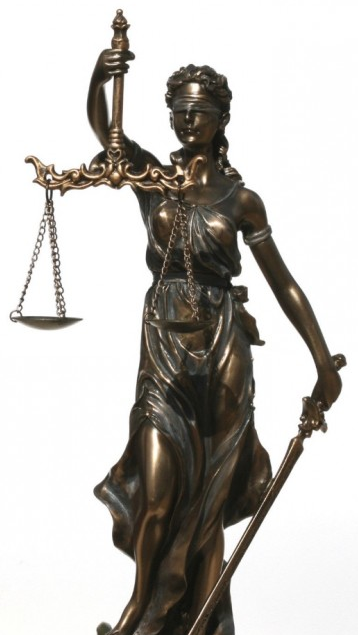 Eri, The Goddess of Justice and Balance
Eri is the arbiter of justice and balance. To those who follow her teachings, she's the one, true goddess and thus the only one that can be truly called a god.   Eri is depicted as a tall, young and beautiful woman wearing a blindfold, and holding either the Flame or the Sword in one hand and the Scales in her other. The flame represents the fire of justice that will reveal the evil and the unjust, while the scales is a reminder to the faithful that everything they do will be weighed by the goddess. The Sword represents Eri's judgement upon those who are evil and unjust.   In very rare cases, commonly in monasteries, she may also be depicted as a blind woman carrying a large tome. This tome being the Book, in which the teachings and wisdom of Eri is written down.   Her race and clothing usually varies with depiction, and there is no traditional canon for what species she is or which culture she belongs to. Therefore her appearance usually changes with artist and location. She is focused on justice and balance, and while this concept might seem easy to grasp, it's not as clear as one might think. Justice, in the eyes of the goddess, may not be what the judicial systems of the world would consider to be justice.

The Book. A collection of scriptures said to have been passed down directly by Eri to her initial followers. It contains the knowledge and wisdom of Eri, and the guidance she has bestowed upon the mortals to follow her teachings. It also contains the Unbreakables, which is a collection of rules that must never be broken, lest you suffer the wrath of Eri.
Divine Domain
Justice and Balance   Holy Symbols
The Scales
The Flame
The Sword
The Book
Alternative titles
The Brilliant
The Just