The Seat of Tyranny

"Alms for the poor, good sir?" whimpered a young illim woman, who was cowering in an opening to an alleyway. Sardan reached for his pouch, but Laskin quickly stopped him by putting his hand on Sardan's. "Don't bother." he said and nodded towards the alleyway behind the woman. It was dark and smokey, but Sardan could make out the silhouettes of three very large men in there. "Whatever happened to this place?" Sardan asked, swallowing hard, accidentally taking a breath through his nose as he did. He gagged loudly at the vile stench of excrement, sour sweat and burning pitch. He quickly found his handkerchief and put it to his nose and mouth, like a filter to the rank fetor of the city.   Laskin kept his eyes open, eyeing every alleyway as they walked, his right hand resting on the handle of his rapier. "It's not so much what happened as what didn't happen, Sardan." he said with an almost sad undertone. "A long line of greedy, selfish and brutal kings have left this country in ruins, and Akeles is just the crown dung beetle on top of the dung heap that is Khol-Chatal."
— Sardan and Laskin, two ambassadors visit Akeles on business. 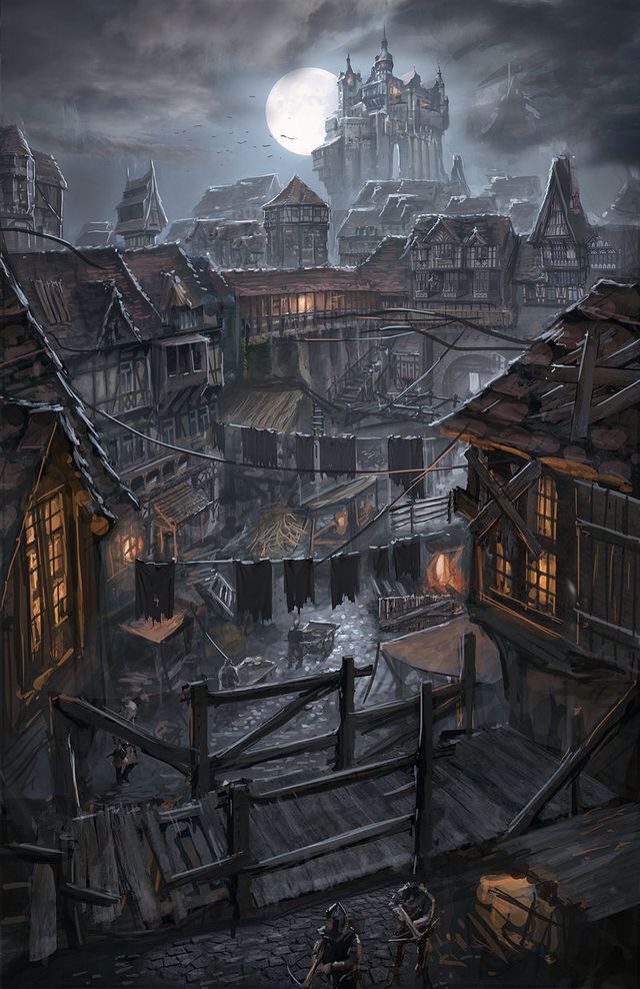 The capital of the Kingdom of Khol-Chatal, Akeles is writhing mass of buildings, stench and bodies. It is a cramped city where houses are built close together allowing very little space beneath them to form roads and alleyways. The small footprint of the buildings is due to land ownership costs. The smaller the building, the lower the cost of ownership.

For this reason, the houses often expand on the second floor to allow for more living space, leading to an oppressive, tight and claustrophobic feeling at ground level with the many overhangs often obscuring the sky.

The streets are littered with homeless, sick or even dead people. Mixed in with the stench of excrement, that is just haphazardly thrown out on the street, Akeles is not a beauty nor is it a comfortable place to live. Yet it is the one place to be if you want to be anyone in Khol-Chatal. The power is focused in the cities. You want power? You go to the cities, and no other city in the chatalan lands is larger and more prestigious than Akeles. As prestigious as anything can get in a nation like Khol-Chatal.

Akeles is a complete melting pot of people and giving accurate census is nearly impossible. Suffice it to say, that if you want to find something, you'll probably find it here. Heck, you'll probably even find a Dru'un, if you looked hard enough.

Due to how the social strata are arranged in Akeles, even fay-blooded can find some form of acceptance here. Even the most downtrodden are united in their hatred for the nobility.

Government? That's a cute joke. Akeles is run by the king and the king alone. His rules, laws and taxation changes sometimes on a daily basis at his whim. Staying up to date on the latest is a full time job. With every new king comes new laws.

Order is kept by the mangh, the king's most loyal soldiers. They function as city guards and police. They make sure that the law is upheld, that tax collectors are safe and that the violence that happens in the city doesn't happen to the rich and protected.

The mangh are hated by almost everyone in the city, but they are also extremely feared for they are well trained, well equipped and absolutely ruthless. They have absolute authority from the crown to exact punishment on the spot, which is at best a fierce beating or at worst death on the spot.

The largest defensive feature of the city is that it's so disgusting that no one in their right mind would want to conquer it. It is said among merchants who have visited Akeles that "Only a chatalan would ever want that city".

There are rudimentary, but horribly unmaintained outer walls protecting the inner city and the kings keep is well kept and well defended, but beyond that there isn't much in the ways of defense. 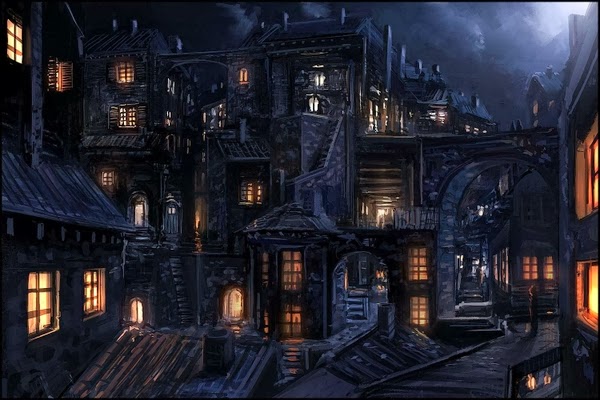 Akeles is a city that is built on far too little land with far too many buildings. The city instills a cramped and suffocating feeling even in broad daylight due to the extremely narrow roads and wide building overhangs.

The fact that most light their way at night with oil lamps or torches and that waste and excrement is thrown out into the streets means that unless you have a very strong stomach, you are likely to vomit the second you step outside.

Akeles does have decent services around, it's just bloody hard to find them in the winding, mazelike roads of the city.

I really enjoy your writing style! it's very evocative. What I did notice, however, is how you focus on stench and crampedness multiple times. What other aspects does the city have? It really came alive with the initial quote, and maybe you can think of some more details when you look at it through the eyes of another character in the setting!   "It is a tightly built city where houses are built tightly together" alsmot right underneath the opening quote - try to find an alternative for the second "built tightly"! :) maybe something along the lines of "where houses almost sit on top of each other" to highlight the cramped feeling.

Yes, thank you for reminding me. I wrote this article at like 2 am in the morning, so I was likely not at full force as far as prose goes. I've been meaning to go back to this article and go over it, but I've been distracted. Your comment brought me back to it. Thanks!