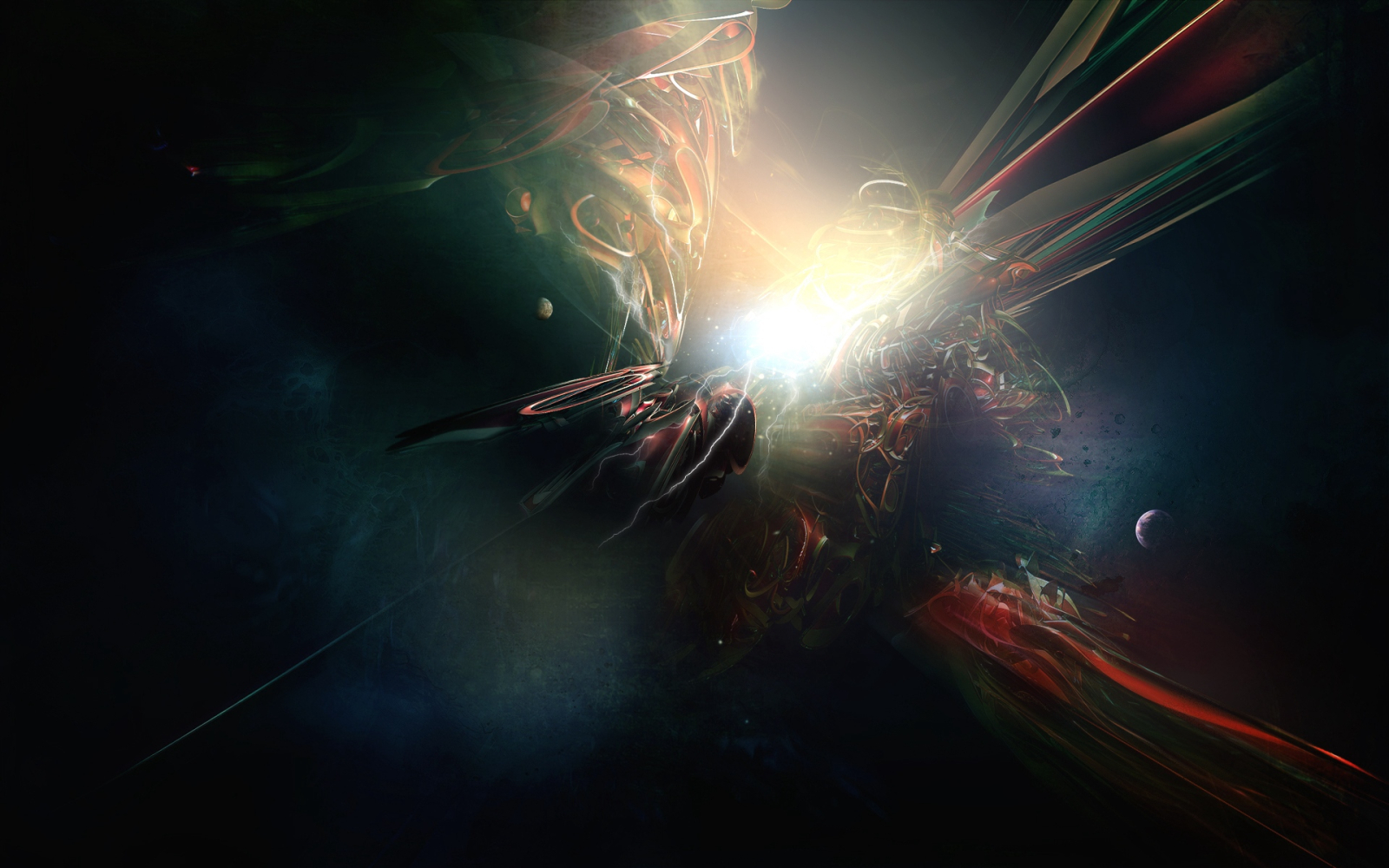 The Cataclysm. A disaster so great it defies description. An extinction event caused by the collapsing Shadow Realm. A searing inferno from millions of explosions, appearing everywhere in Dunia at once, leaving the world scarred and burned. The Cataclysm occured in mid summer of 2640. A year we now have come to call

A blinding pain shot through Rudek's head. His interface spiked, the security measures instantly kicked in and disconnected him from both The Web and his terminal. His vision cleared and he saw the lights of the office flicker for an instant before falling dark. His terminal threw sparks on the floor and smoke billowed from the chassis. Rudek yelped and threw himself off of the chair, turning to tell his collegues to come look, only to notice they'd had the same experience. Some of them hung lifeless in their chairs. The room was hazy with smoke.

"What just happened? Someone call security!" His voice was unsteady and he rubbed his blistering temples.

His collegues, those who were still conscious, all stared out the window behind him, their faces frozen in awe and disbelief, lit by an unnaturally bright light. Rudek turned to look. All he could see was a blinding light. Something akin to a gigantic fireball rising over the city. His mind had trouble processing what he saw.

The windows shattered and shards of glass embedded themselves in everything in their path. Rudek screamed in pain, his voice joining the choir of agony from his collegues.

"What is going on!?" he screamed and threw himself behind a cupboard. He could barely hear his own voice over the roar of the wind. The pain was unbearable. He stared at his white, collared shirt growing redder with blood.

But he never got an answer, and his pain would be the least of his problems. In a flash, the room was on fire. The air he breathed was on fire. He was on fire.

The End of Everything

None saw it coming. None were prepared for it. Without warning, giant balls of searing plasma exploded out of every shadow powerplant in the world. The incinerating spheres rapidly expanding to monstrous size, over a kilometer in diameter. The thermal pulse from the explosion set everything within 10 kilometers ablaze. If it could burn, it burned. Trees. Buildings. Pets. People. Everything was instantly set on fire. One second they were walking to work as every other day, then they were on fire. Mercifully, these burning people would have only seconds to live.

Those lucky to be far enough away from the heart of these explosions only had seconds to notice something was wrong. The sky was on fire, alight with an ominous and intense light, a thousand times brighter than the sun. Electronics ceased to function, the ground shook, and then...the shockwave came.

It grew from the epicenter of each explosion, creating winds several times more powerful than the strongest hurricane. Infrastructure was no match for this crushing wave of destruction. Buildings were ripped apart and fell as if they were made of cards. People, vehicles, bridges and even small buildings were thrown away like dust in the wind.

Dunia's crust rang like a bell, rippling under the unfathomable energy from millions of explosions, happening everywhere at once. The heaving of the world caused quakes, stronger than anything ever recorded. What civilisation wasn't devastated already by the explosions was reduced to rubble. The thermal pulses raced all over the world, turning it to ash as they grew. Everything burned.

A mushroom cloud from each explosion rose towards the sky, reaching the world dome 60 kilometers up, darkening the sky and casting the ruins of the once proud cities in shadow.

Bedrock from ground zero was flung into the air, crashing down kilometers away from the heart of the explosions. Trees, buildings and people alike were washed away by the shockwaves, like toothpicks in a hurricane. Wildfires consumed the continents and the already dark sky grew ever darker as ashes and debris filled the air.

Millions died in an instant. Billions seconds later. Those who did not die from the explosions, died from wounds inflicted in the aftermath of the disaster or from lack of food and water within days. Those who managed to find shelter and supplies eventually succumbed to the the collapse of society.

The wildfires burned for months, consuming everything and everyone in searing flame.

As far as we know, there were very few survivors of the Cataclysm, most of who were the people living outside the world dome in the colonies of The Abyss. The population of the megacity Fusion City, which was shielded from the destruction by its protective dome, were left relatively unharmed, save for the Perimeter districts and any buildings outside the Perimeter Wall. The citizens of Fusion City can thank whatever gods they believed in that the city did not rely on shadow energy, but fusion energy. That is the sole reason they are still alive. These people are colloquially called Domedwellers by the wastelanders.

The majority of the destruction was focused near cities and installations which utilized shadow power plants and near those, settlements were turned to rubble and ruin. Further from these epicentres of destruction, the pure physical destruction was less, and these ruined settlements are more to lack of maintenance and use than explosive destruction. The people in these settlements were killed by the thermal pulses, poisoned dust in the air and the lack of sunlight for the immediate time following the Cataclysm. Those who survived the immediate disaster struggled with getting resources in the aftermath. Food, water and medicine was hard to get by as the infrastructure of the world was destroyed.

There were pockets of survivors who lived either underground or in remote locations, far from any shadow plants, that survived the Cataclysm. A few on the fringes of cities survived the blast, the thermal pulses and the ensuing collapse of society. Collectively barred from entering the safety of the city dome, these people now live in the Shadowmark, the wastelands left by the destruction of the world, outside Fusion City. The people who scavenge the Shadowmark in search of resources are refered to as wastelanders or Cockroaches.

With the destruction of all living nature such as trees, groves and Fay glades, the leyline system was ripped to shreds and the magic energies of the Fay world was shattered. Without their connection to nature and their magic, the Fay rapidly degenerated and withered away. Within months, every single Fay was dead. The millenia long conflict between Kykr and Fay was over and neither side was the winner.

Due to the heavy use of Shadow Power in Dunia, the Veil between the Shadow Realm and Dunia was weakened substantially. With continued extraction of Shadow Energy, the binding energy of the Shadow Realm was so weakened that the entire dimension ruptured. The remaining energy in every piece of matter in the Shadow Realm formed a catastrophic, unfathomable explosion. The cataclysmic force smashed through the Veil, flooding Dunia with pure shadow energy and the searing intensity of the sun. With the shadow power plants being conduits, the energy found its way into the heart of civilisation everywhere, destroying the cities from within.

Want a more scientific, but also "human" explanation of what went on in all of those cities? Let Kurzgesagt help you.

Very nice, this has me interested already. I'm curious to know more about this world.

Feel free to browse around! A good place to start is this article which will get you started!

Your quote makes for an especially powerful opening, conveying the level of destruction while still leaving many questions unanswered. A very powerful article, well done, I love it!

The people who scavenge the Shadowmark in search or resources are refered to as wastelanders or Cockroaches.

Small typo here, I think you mean "in search OF resources".
Lead Author of Vazdimet.
Necromancy is a Wholesome Science.

Thank you! It is sort of the "foundation" of the entire setting. Although the world has existed for thousands of years (and a lot of that is covered in Dark Shadows, this is sort of the defining moment of the world.   This is what makes the world the way it is, and the people within it. It is also the birth of the two main "antagonists" of this universe: The Processor and the Children of the Cataclysm.

I love the idea of a magical nuclear explosion... Is that shadow energy dangerous like radiation? Has it left some kind of contamination behind?   That article is very well presented, and I like that quote and the youtube video at the end. It's all very shilling...

Yes, the Cataclysm left Shade (basically energy from the Shadow Realm, turns into a viscous, extremely energy-dense liquid when in Dunia) all over the Shadormark. Shade is extremely toxic to anything in Dunia, corrupting it horribly. There are many effects of that in the Shadormark. Like the Processor and the Blight disease. (Check those articles for more deep-diving)

I Don't Know Who I Am
Mar Qaroll

...Well, heck. This was phenomenal. The opening...I could visualize it. What a way to start the article. It's scary and intense and awesome. I love it.

It's kind of my "trademark" to capture the reader with a short story in the opening. :) I don't always do it, because some articles don't really fit with it, but I find it effective. Also helps me visualise what I'm about to write about.