The Sling Gate Network, affectionally called the SlingNet, was a world-spanning network of teleporters, allowing instantaneous travel from one gate to another. The gates utilized a method of slingshotting matter through the Veil into the Shadow Realm and immediately back out again at a different location. The technology was developed from the ability of Shadow Mystics to "blink" through space using the same technique. Since the system consumed enormous amounts of power at the scale it was operating and it utilized the Shadow Realm as a slingshot location, the Slingnet was rendered utterly inert following the Cataclysm. 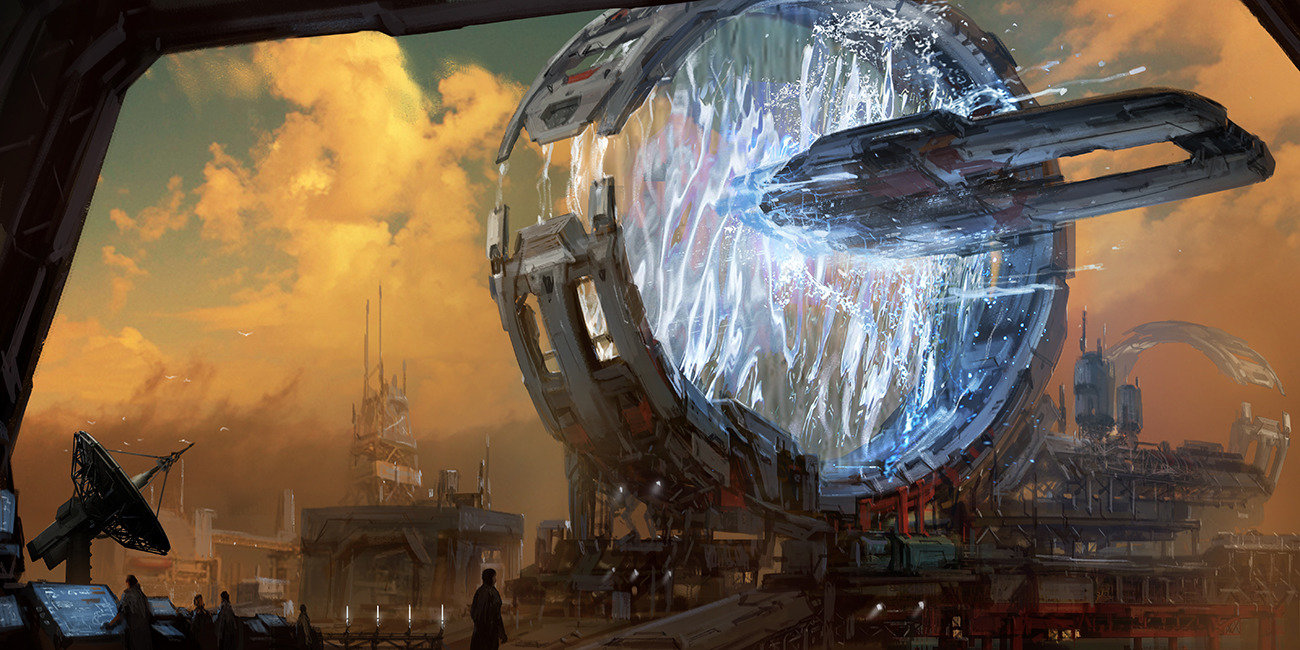 The ability to slingshot through the Veil, briefly entering and exiting the Shadow Realm, was an ability known as far back as the original discovery of Shade and how it was used as magic by the Shadow Order Mystics. It was a comparatively trivial ability, heavily utilized by the mystics to escape persecution, put potential followers in awe and terrorize their victims.

Once the order was destroyed, shadow magic outlawed and society grew away from most of its extreme religious superstition, shade was studied more closely, including the personal use of "magic". With it came many discoveries of the properties and capabilities of shade, most importantly its incredible energy denseness. It was seen as a potentially limitless power source, dwarving anything the Kykr society could muster at that point in time, relying mostly on wind and air for power. Limited steam-based technologies existed, but they weren't even a raindrop in the sea by comparison to the enormous potential of shade.

With the abilities of the mystic order meticulously studied, the ability to slingshot through the Veil between the worlds seemed to be one of the most useful abilities, aside from the raw energy potential. If the ability could be leveraged for objects, not just people, it could have massive implications for transportation. Alas, it would be almost a hundred years before technology in general caught up to the point where it was even possible to utilize this ability without the power of a mind.

However, eventually, the mystery was solved, the technology was in place and the first pair of sling gates, primitive as they were at the time, were built and tested. It did not work out well for the first years of testing. It turned out that while sending something through the Veil was a relatively straight forward thing, but successfully pulling it back and at the correct location was a very tough nut to crack. Countless probes, and even a couple of lives, were lost in the Shadow Realm during testing.

Once the kinks were worked out, the first successful sling gate test was performed, teleporting a person a stunning 40 meters across a field in less than a second. This marked a new era in Kykr society. No longer were they bound by physical distance, weeks of traveling. Goods and people could be loaded onto a truck or barge, sent through a gate and immediately appear at its destination. The Kykr wasted no time building sling gates all over the world.

The Downfall of Long-Distance Travel

Once the SlingNet was sufficiently developed, it became the de facto default travel mode for everyone. Why spend hours in a vehicle if there's a sling gate at your destination? Why risk rickety flight or the wicked weather of the sea, when it's much easier to instantly travel to where you need to go? Short-range barges, busses, trucks and hovercraft were designed specifically to ferry goods and people through sling gates, huge terminals formed around the gates to handle the massive amounts of people and goods that needed transporting.

These vehicles were designed to travel for a few hours at most, never really needing to go very far. The largest transport vehicles were little more than mobile platforms, capable of moving enormous amounts of goods in containers through the gate, only to be unloaded on the other side. Kind of like land-moving container ships, only with extremely limited range.

The main drawback of the SlingNet was that it consumed insane amounts of power, therefore requiring almost every gate to have a nearby power plant to spin it up. However, with advances in technology, the gates needed less and less power and the power could be brought in from more remote power plants via dedicated lines, thus allowing gates to be built closer to population centers.

Aftermath of the Cataclysm

After the Cataclysm, with the Shadow Realm collapsed, there was nowhere for the SlingNet to send anything. There was no other dimension anymore. In addition, powering the gates became a problem, seeing as there was no longer a way to extract Shade from the dimension either. What little Shade remained became a priceless resource.

With decades of reliance on the SlingNet, the Kykr suddenly stood without any kind of reliable long-range transport. All their vehicles were built for inter-city transportation. Basically enough to take them to a sling gate and barely any further.

Once society, reeling from the destruction of the world, got back on their feet they realised that the SlingNet was dead. Fusion City was suddenly completely isolated from the world. The Web could no longer connect to anything that wasn't a local node in the city and the Old Town sling gate was defunct (and most of Old Town with it).

With no way to travel long distances, and even less vehicles capable of traversing the now toxic wasteland that was everything outside the Perimeter Wall, the inhabitants of Fusion City were utterly cut off from anything outside.

I'm a sucker for transportation technology articles—at least when they're well done, which this is. I love the idea of teleportation and you really make me believe it's possible here.

Thank you for the read! This whole concept actually came as a result of a spell that shadow mages used in Dark Shadows. So it was a case of Worlds building themselves. I love when that happens :)