The Nekan Wolfbird is a species of flying wolves that supposedly roamed the Nækan highlands in the feudal age. There are plenty of preserved writings of that age that speak of the Nekan Wolf, but most of is prose or third party information, giving modern scientists doubt that it ever existed at all.

When traveling the frigid plateaus of Hakr'Næka, peel your eyes not to the ground, for it is barren and dead, but to the sky where the Nekan Wolf stalks its prey.
— Excerpt from "The Mountain Tribes of Næka", a sort of traveler's guide.

While there is plenty of writing about the wolfbirds, there are few reliable historical records that speak about them. Most of what is preserved is prose and personal anecdotes, rather than specifics. It was supposedly a winged wolf-like creature, not unlike the Álfr but a lot smaller, about the size of a large fox.   The Nekan Wolf was not capable of prolonged flight, instead relying on thermals among the mountains and could mostly just glide for long stretches, using it's superior vision to hunt for prey. The Nekan Wolf was a pack animal and supposedly even hunted Kykr in small enough groups. It is also written that the Nekan wolf was unwilling to give prey that it had once located up It would hunt until either the prey was caught, or the wolf was incapable of continuing the hunt.

The notion of a flying wolf is an appealing one for artists, and for this reason the Nekan Wolf is prominent in fantasy art, literature and movies. It is usually depicted as a graceful, but lethal predator, often playing the part of a villain's scouts and hunting parties and is often given limited sentience in these works of art. 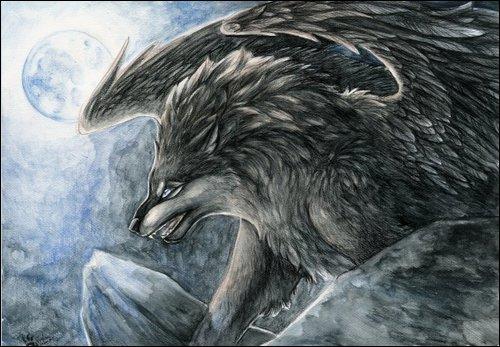 Næka is a huge mountain range that stretches from the far west coast to the east coast of the continent. It separates the continent into its northern and southern parts, with the Gimroan basin and Morvátian lowlands between it and the Spineridge.

A word from the ancient feudal age that means "belonging". To be "one of us". It originally included only the illim, kuna and vindral species, but with time included the rest as well. In the modern age, few still use this term thanks to controversy.

Answering: "Write about a tale surrounding a mythological creature in your world."
Visit Toblin's Competition Page Check all other answers to this prompt Competition Homepage