Laser weapons were, for the longest time, large, unwieldy and lasted only for a single shot. They required either a truck-sized power source or a direct connection to the grid. With the combination of miniaturization and progress in energy storage, portable laser weapons started to become a reality.   Modern laser weapons are high-intensity pulse lasers, producing nanosecond long bursts of high-intensity, multi-frequency laser packets. Their main drawbacks involve lack of sustainable fire, but with their high damage and unique damage type, they make for great short-burts weapons that melt through armor and shields like butter. Recharging a laser weapon is commonly done by putting it in a dedicated charger for about an hour, after which it's fully recharged.

Making continuous wave weapons were rapidly deemed unfeasible as these lasers, to reach the power level required to actually damage something, would need not only to be fed enormous amounts of power but also require large and impractical cooling. For that reason, the vast majority of modern weapons are pulse lasers.   The very first weapons were large, statically mounted laser cannons. The large cannons could easily accomodate both energy storage and adequate cooling, even when mounted on vehicles. These cannons, while limited in their longevity, proved to not only be incredibly destructive, but their variable power settings allowed for unprecendented versatility in damage application. As a bonus, most armor had been designed to resist kinetic energy, rather than intense thermal energy, making the cannons useful against early vehicles.

by Vladimir Stayukhin
The modern pulse rifle, or laser rifle as most people call it, is a somewhat large two-handed weapon looking vaguely like a cross between an assault rifle and a sniper rifle. A big energy pack sits in the back of the rifle, giving it a bullpup shape. The rifle is capable of varying its output between little more than an intense burn and a lethal blast of hyperenergetic photon packages. At full power there's enough energy in the battery pack to allow for ten high-powered blasts before it needs recharging. There will be few things alive once the energy is spent.
Popular Models
Axylite Barnacle (Pistol)
Axylite Z3 (Light Pulse Rifle)
Axylite Z6 (Pulse Rifle)
MAKA PL-12 (Pulse Rifle)

Laser technology is an important part of society and is used for everything from surveillance to weapons.

Technology / Science | Mar 1, 2020
However, in spite of it's assault rifle-esque design, all pulse rifles on the market are "semi-automatic", firing a single "packet" of pulses per press of the trigger. Sustained fire would rapidly overheat the rifle's generator and battery pack. A packet, sometimes referred to as a pulse or bullet although both designations are incorrect, is a series of nanosecond long laser pulses, approximately 100-500 ms long, depending on the power setting of the weapon.
For the same reason, pulse weapons cannot be reloaded, only recharged. It is not considered safe to use the rifle for longer than a single energy pack before it needs a significant time to cool off. 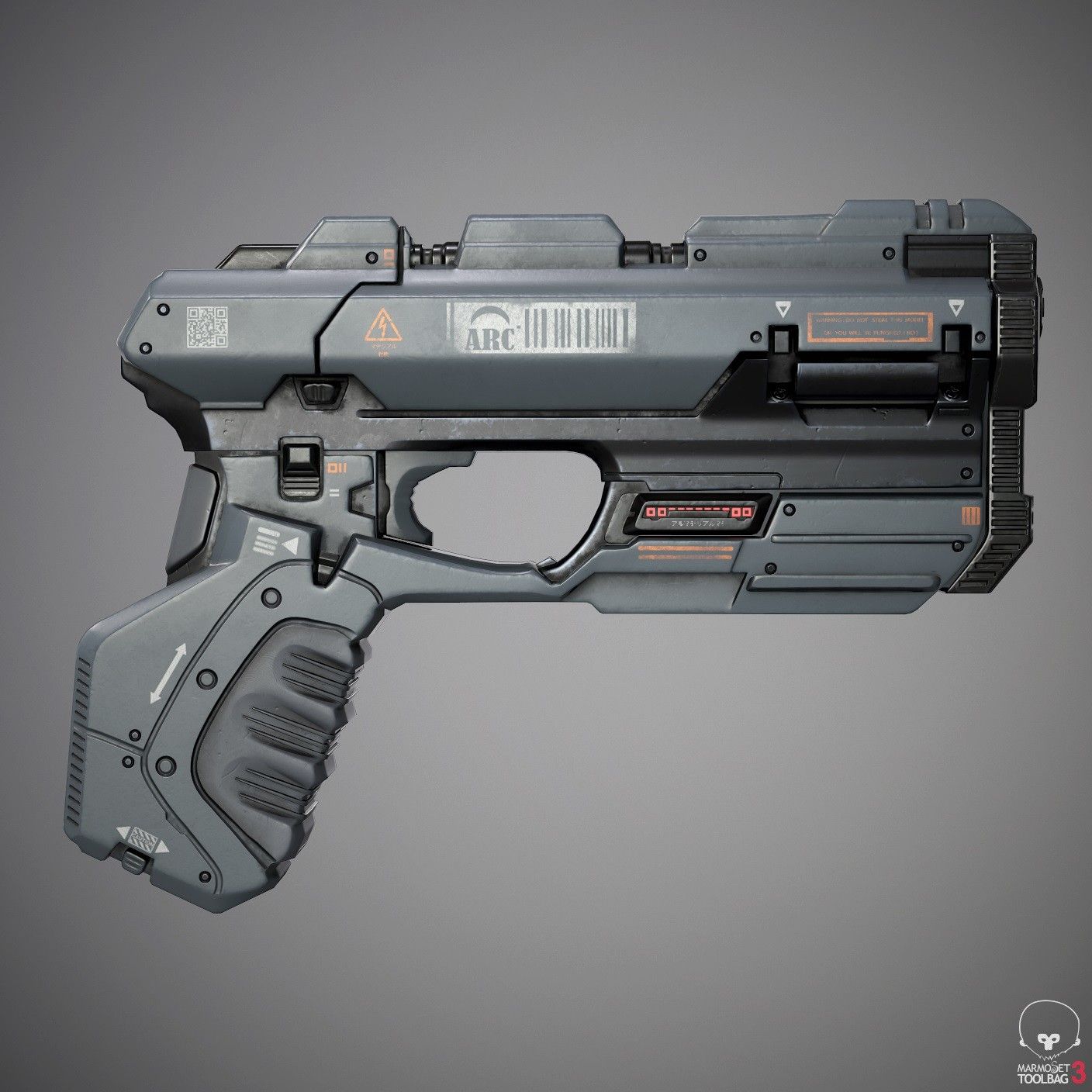 by Gregory Trusov
Pulse pistols are significantly weaker than their rifle counterparts but still pack a serious enough punch to be a threat. Thanks to a more compact design and smaller pulse chamber they use comparativey less energy and can be used for a surprising amount of shots before needing recharge, even at full power. On the flip-side, the compact design makes them more sensitive to overheating, which is why continuous fire is discouraged by manufacturers.

Firing a pulse laser is a vastly different experience from firing a traditional firearm. Not only is it nearly silent, there is barely any feedback that the weapon has been triggered. No recoil, no smoke, no loud bang. In addition, shooting it requires no leading of a target, as the light travels at, well, the speed of light. There is no significant travel time for the pulse packet to reach the target and wind does not affect it either.   Dense fog could lead to a small weakening of the packet through absorption but it's not significant enough to matter much. Glass, on the other hand, could be an incredible obstacle, as well as highly reflective surfaces as they would reflect and refract the packet off of its target. Even a vehicle windshield could be enough to refract the packet enough to miss its target entirely.   Laser-shooters learn to accomodate for light refraction and many pulse rifle scopes have built in computers to help calculate refraction and compensate.   When triggered, all that happens is that there is a slight, high pitched whirr from the rifle as it excites the light packet and a soft "crack" in the air. The pulse packet ionizes and superheats the air it travels through, making it violently expand. The air cools off almost as fast as it heated up, leading to a cylinder of vacuum forming around the pulse packet's travel. The "crack" comes from this cylinder collapsing in on itself, similar to cavitation in water.

Laser weapons may be called just "laser" weapons, but they are in fact semi-plasma weapons, as the pulse-wave packet is accompanied by a tiny amount of superheated gas in a plasma state. Compared to "real" Plasma Weaponry, there are no large amounts of gas, barely any radiation or ignition risks involved. All the plasma gas does in this case is to keep the laser focused and give it a touch extra punch for dealing with reflective armor, which would otherwise almost entirely reflect the packet.
Laser

Sooooo, really enjoyed this. It's a cool way of handling lasers more realistically, particularly in how you break down the experience of firing the weapons. While everything made a ton of sense, i did wonder why they make no sound. Would something of that power make a hum, or were you referring to the shot itself. No bank, no pew, but it can be assumed you'd hear the actual mechanisms working? I could be reading to far into it but still it got me thinking.   It's terrifying in many ways. With that range (I mean, speed of light) u don't miss a shot a sniper, and I imagine its... an unpleasant death... though likely almost instant.   The little history section toward the beginning was a nice little touch as well. I like how you quickly move through early version and finally hit the more recent models, especially like the little warning label from the manufacturer, I'm assuming that's what that quote is.     My favorite part is the last bit for one particular reason among many. "Reflective armor." Bot only have you addressed a glaring problem with laser weaponry, something I don't see too often now that I think about it, but you immediately provide how that problem is worked around. Well done Toblin!

The physics are sketchy and hand-wavy at best, but as long as the technobabble sounds cool and believable enough, it works. :)   As for the "no sound" part. It does give off a high-pitched whine when fired as the electronics draw a lot of power from the capacitors, but it's pretty much only audible for the people around the weapon itself. At distance, you won't hear anything but the "crackle" of the air, provided you're close enough to the firing line.   It's not silent, but its nowhere near as loud as a traditional firearm, even with a silencer.