Illim are strong, enduring and durable. They are most known for their candid personalities and their beautiful crystalline growths on certain parts of their body.

Drax was tired. He hung over the bathroom sink, listening to the water flowing. He could barely think straight. Almost absentmindedly he washed his hands, and the sink turned red with blood. The sight startled him, despite him being fully aware that he was covered in blood. Not his blood, but blood nonetheless. The girl's face clung to his mind. He worked his hands to get the blood off of his hands and claws. Or perhaps he was trying to wash the memory of her face away.   “Drax, we need to get the fuck out of here. This place isn’t safe. They know of it.” a voice said from the room outside. Carla, his companion, was standing in the doorway, nervously aiming a shotgun at the door out. Drax closed his eyes and sighed. Once he had cleaned his hands, he turned the water ice cold and splashed his face with it.   “I know.” He stood up and looked at himself in the mirror. The blood-mixed water ran across his face, bouncing in between his crystal growths and formed a small stream across his nose bridge. He frankly looked like shit.   “I’ve run out of safe houses. It might be time for you to call in a few of those favours people owe you.” he added.   “Way ahead of you. Jefe will take care of it. But we need to leave. Now. The drones will be here any second.” Carla replied.   “All right. Let’s get out of here.” Drax said and grabbed his leather jacket. “I ain’t about to die here. Not now.”   As they made their way out of the front door, he stopped, for a second, and looked back into the room.   “I’m gonna miss this place.” he said, as he twisted the top of a napalm grenade and threw it into the room.
— Drax and Carla on the run from corporate hunters. 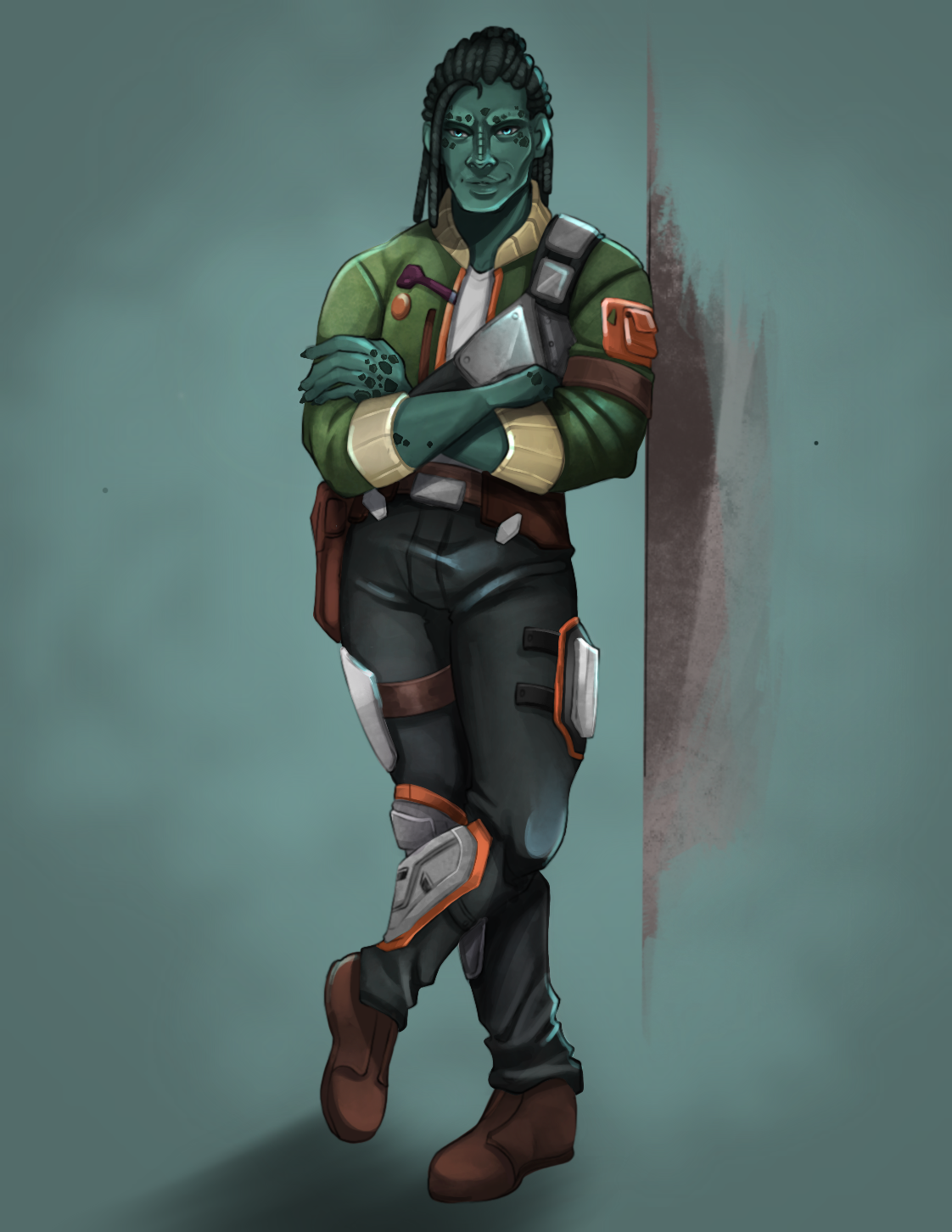 Illim are well built, strong and durable. Most of them possess well defined musculature even if they don’t spend any significant time exercising and their skin has this thick, almost leathery feel to it and is very strong. This makes Illim unusually durable. The average illim stands about 175cm tall and weigh around 90kg. Their hands are strong and each of the five fingers end with a stubby claw. The claws are not sharp, but are durable, letting Illim use them as sturdy tools. Their four toes are clawed as well.

But the most defining feature of theirs is without a doubt their crystalline growths. Where these appear is entirely individual, but these rock or crystal like growths usually appear on the backs of hands, the neck, shoulders, collarbones, elbows, upper arms, cheeks, forehead or thighs. Each illim is unique and not two illim‘s growths are the same.

The growths themselves are rock hard and the illim lack sensory nerves inside these growths. What their original purpose was is long lost to history but everything from reproduction (beauty) to tools and natural armour are popular suggestions. While the illim feel nothing on the growths themselves, they have nerves in the surrounding tissue, so they can sense pressure on the growths, but not soft touches. 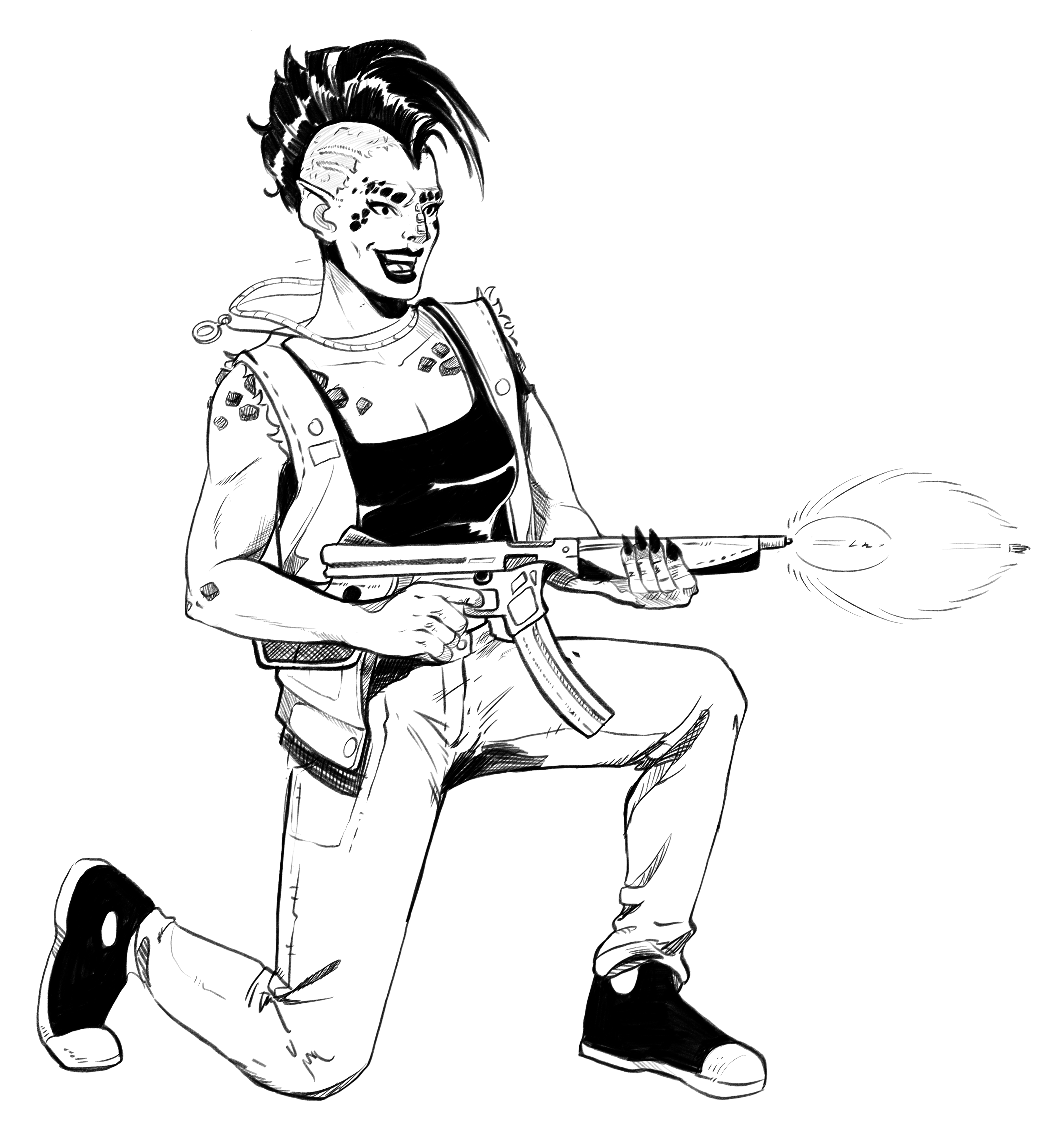 Their skin varies in colour, the most among any of the species. Illim are genetically predisposed to adapt the colour of their surroundings in their first few years of life. The skin and hair colour will settle around the age of 2. With most of Fusion City being a neon-ridden commercial nightmare, illim have skin colours in green, blue or reddish hues. While the skin colours are far less vibrant than neon signs, they still adopt their surroundings. Those who have grown up in the metropolitan areas may have more greyish or green skins, while those in the industrial districts are brown, grey or reddish orange.

Their hair is thick and tangled and most illim have taken it to custom to wear the hair in matted locks. The hair is too tangled and oily to make much sense wearing it loose. Those who do not care well for their hair find it becomes like a lump of tangled strands. The felted locks of hair become so dense that they can keep moisture for days. An illim must take great care of their hair or this state can cause mould to form and the hair starts to decompose from within the locks. An illim with a hair in this state is either sick, destitute or does not care about their hair.

Illim’s faces are characterised by smaller crystal growths that flock around their cheeks, cheekbones, jawbones and eyebrows. Their noses are narrow, somewhat flat and defined by a bony ridge that start at the edge of their brow ridge, and run over their eyes and down the centre-line of their nose. Illim have monolid eyelids and their eyes are somewhat deeply set, allowing them to be well protected by the bony brow ridge and the defined cheekbones.

Illim mature in about the same time as the rest of the species in Fusion City, aside from the vindral who have significantly faster lifespans. Pregnancy lasts for about 10 months and an Illim is mature after about 15-20 years and considered adult after 17 years, like the other sifir species.

While illim are rough on the outside, they are candid and honest as people. They prefer to be straight and to the point, rather than “tiptoeing” around issues. They usually don‘t lie and most are naturally terrible liars. Being bad liars, they prefer to deal with facts and absolutes as much as possible and prefer to say what they mean, rather than sugar coat things. Illim are loyal, honest, a bit shy and often quite set in their ways, having trouble adapting to new situations and ideas.

Illim are overall calm and tempered people and don’t fly out into fits of rage or violence. Illim are mostly jovial and friendly, preferring to solve their issues through talking rather than fighting.

The illim have been a part of civilisation far beyond recorded history. They were one of the two original species to form the first pan-species alliance, the other being the vindral. While living confined on the Blood Coast when the vindral fled the Fay from the island of Ayera in the north, the illim welcomed the vindral as they settled in Unity Bay. Together, the two species united and travelled south across the mountains and encountered the kuna of the plains. These three species formed the original Trifolk Alliance that gave birth to the modern civilisation.

An Illim is considered beautiful when skin and hair colour match the preferences of the viewer, when their features are symmetrical and sharp and possessing particularly pleasingly placed crystals. For males, a muscular build is preferable.  For women there is a larger focus on their hair and crystals.

Excellent description, I liked the pictures too! I like how you take time to muse about possible origins of the crystals too, and not just taking them for granted with "they just have them". Awesomesauce.

Thank you for the read!   I still need to pass over this article a couple of more times and clean up a couple of sentences and unify all the species articles, but I'm pretty happy with the Illim.   I used to have a favorite species, but no longer. These days I can't decide which of the five sapients who is my favorite, which is great. :)