The Hessak (he-shak) are a species of sapient lizards who once lived in a hive like society. They were enslaved and selectively bred to become a slave labour force for the Kykr. Modern hessak no longer have castes or biological roles but possess two distinct physical sexes. They are most known for being resilient and nimble. The hessak possess multiple traits and abilities that help them be incredibly perceptive of their surroundings and with their great dexterity, they make for excellent burglars or spies.

“Ah! Draxss, come in! Come in!” Zalik gestured towards a fancy armchair in front of his massive, wooden desk. “I have been exsspecting you.”   The Hessak was dressed in typical Zanga clothing. A big, yellow drape hung about his neck and laid across his bare chest. His legs were strapped into a pair of tight military pants. In typical Zanga fashion, his chest, neck and arms were covered in intricate and colorful tattoos. Drax winced. It must've hurt like hell to become that inked as a hessak.   Drax nodded and stepped into the room. It was dim and smelled like musk. Two goons stood on either side of the door and they eyed Drax as he walked past them. One was a giant of a man, a dulzuun with mean tusks and tattoos on his face. Drax recognised him as the giant who had tried to have him killed just a week ago. The dru’un grinned and nodded to Drax.   “Right. What‘s this all about?” Drax asked and sat down on the chair. His legs almost disappeared in the thick layer of smoke that floated across the floor. “I‘ve got enough problems without your goons chasing me about.” he gestured to the giant at the door. “I‘ve no grudge with your people. If you got a problem with me, try talking instead of sending your ninnies.”   Zalik grinned. It was a terrible look for his stiff, hessak face. All teeth, no joy.   “Remember Hasspur Japotek?” he said, leaned back in his chair and steepled his fingers. “A csertain csyberrunner working with the Goptah gang?”   Drax remained silent. Every sound was like a sledgehammer on his eardrums. He took a deep breath. “I know of him, yeah. What of it?” he said after a while, perhaps more cocksure than he intended.   Zalik‘s eyes narrowed and his tongue flicked in the air in that disturbing manner that only hessak could do, like they could taste your fear or were preparing to strike like some desert snake.   “Japotek wass not Goptah. Well, officsially he wass. But he wass working for me.” He leaned forward, cocking his head to the side. “and you, Mr Raja” he continued, “killed him. He was quite a usseful assset, and I excspect to be compenssated.”
— Drax in a meeting with the Zanga gang leader, Zalik.

Hessak are bipedal and possess two arms and a long, strong tail. They have thick, leathery skin with a smooth, scaly surface. They are shorter than illim, averaging 165cm tall and weighing around 75kg and have a lean build. Hessak have a limited ability to store fat as extra energy and as a result they are often slim despite not being well trained. This makes them lighter and more nimble than other species, but also more vulnerable to starvation.

Some of them have bony ridges or spikes on the back of their heads and sections of hardened skin, forming ridges near bones under the scaly surface as a form of extra protection. This is most visible on their cheekbones, forehead and the backs of their hands.

Their hands are nimble and end in narrow, hard fingertips that aren’t quite claws but can still inflict harm upon others or used as makeshift tools.

Hessak faces are long and pointed, with eyes set high on either side of the face. They have two small slits on the snouts that function as their olfactory organ. These slits are too narrow to allow for breathing, so hessak always have their mouths open to allow for proper airflow.  Their eyes are protected by a strong ridge where their eyebrows would be if they had them.

Some hessak have spikes or hard protusions on their lower jaw. These serve no known biological function other than decoration. Their high set eyes give them great peripheral vision and a hessak can see up to 300 degrees around them without turning their heads. The hessak eye is well developed for close quarters and also have limited thermal vision, giving them the ability to see living things and heat sources in absolute darkness.

While this is undoubtedly a great advantage it does not allow them to see in darkness any better than other species and their long distance vision is poorer than most. Only the dulzuun have worse vision at a distance than the hessak.

Hessak are resilient to damage and their skin is so tough it counts as natural armour. They also have fantastic regenerative abilities that allow them to not only survive but heal wounds at a higher rate. They are also very resistant to high temperatures, but conversly sensitive to cold.

Through the millennia of selective breeding the hessak have ended up in a strange place with reproduction. The hessak are descendent from the sifir, just like the other species (aside from the vindral), meaning they are compatible with them, but a hessak female will still lay eggs, regardless of which species the child is. The female will lay the egg about halfway through the pregnancy and the rest of the development will happen outside of the mother’s body. Most clinics are well equipped to deal with hessak births.

Hessak are usually quiet, preferring not to speak unless it’s necessary. Unfortunately, thanks to their limited facial expressions they are often required to speak more than others to get their point across. Hessak skin is inflexible and they don't possess as many facial muscles as the other species, making them inexpressive and unable to emote as well as the others.

In difference from the vindral, who use body language to make up for their limited vocalisation, the hessak don’t seem to care much about their poor communication skills. If someone doesn't understand what they meant, it’s their problem. This of course varies with individuals, but it seems to be a recurring theme.

Hessak are more used to problem solving and high intellect than most of the dru'un, but not by much. You won’t find many corporation leads or scientists who are hessak. In that way they are just as disadvantaged and socially held back as the dru’un. However, many hessak have found success in street gangs where cunning, deception and planning is paramount. Particularly the Zanga Brotherhood is made up primarily of hessak, even though other species are welcome.

Because of the shape of their mouths and tongues, hessak have trouble speaking like the other species and often have a characteristic lisp and sloppiness to their speech. Certain vocalisations are more difficult than others. In addition, their mouths have hundreds of small, sharp teeth that can appear intimidating if bared carelessly. The stiffness of their lips make sounds like “p”, “b” and “m” difficult for the hessak and the shape of their mouth and throat cause most sibiliants (s-like sounds) to be somewhat lengthened. Contrary to popular belief, hessak do possess vocal folds and are capable of making voiced sounds.

The hessak have only been full citizens of society for about 800 years. They evolved in the southern isles as a hive-like species with multiple different biological castes meant to fulfil different roles in their society. Most of the castes didn’t possess a strong sense of individuality, instead being a “drone” of sorts with no sense of self.

The Kykr alliance conquered and enslaved the Hessak over 3000 years ago and started a selective breeding program that lasted for millennia. The purpose was to breed a perfect working force that could perform dangerous labour that required resilience, strength and agility.

This breeding program all but destroyed Hessak society and their biological castes were all interbred and selectively removed from their species. The modern Hessak has no biological caste, only two physical genders and neither do they have the drone-like mentality of their ancestors, instead having adopted the strong sense of individuality of the other species.

With a species as diverse as the Hessak, beauty is very much in the eye of the beholder. They lack many of the usual beauty markers of the other species, such as hips, mammary glands and hair. Hessak beauty is instead measured in skin and eye colour, physical build and the look of their horns and spikes. 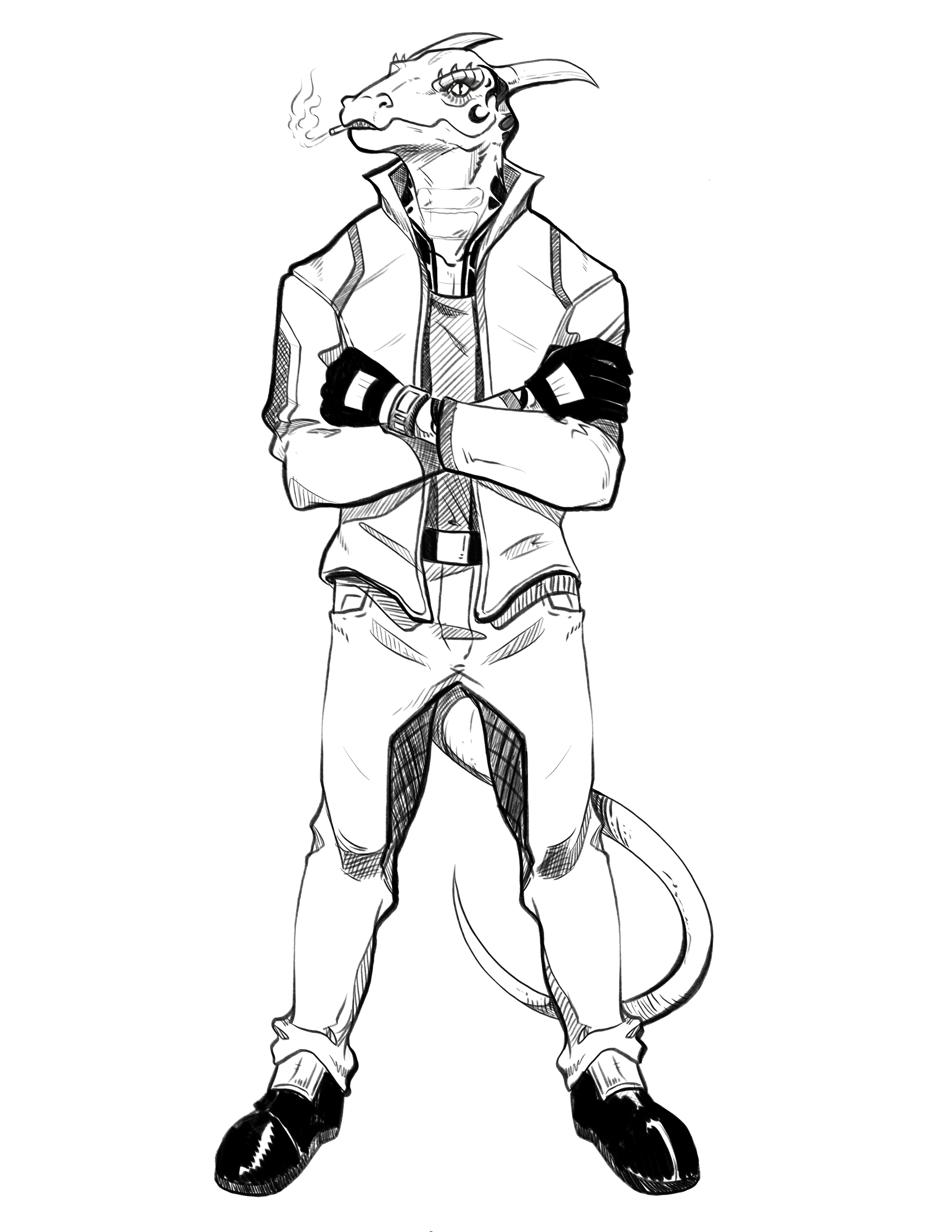 Not only their societal norms, but their original biological constitution. They had different biological castes, who were biologically distinct. The Kykr ruined that.