An abyssion is a vessel derived from Dunian submarines. Superfiscially the same kind of vessel, the abyssion differs from a traditional submarine in many, many ways. 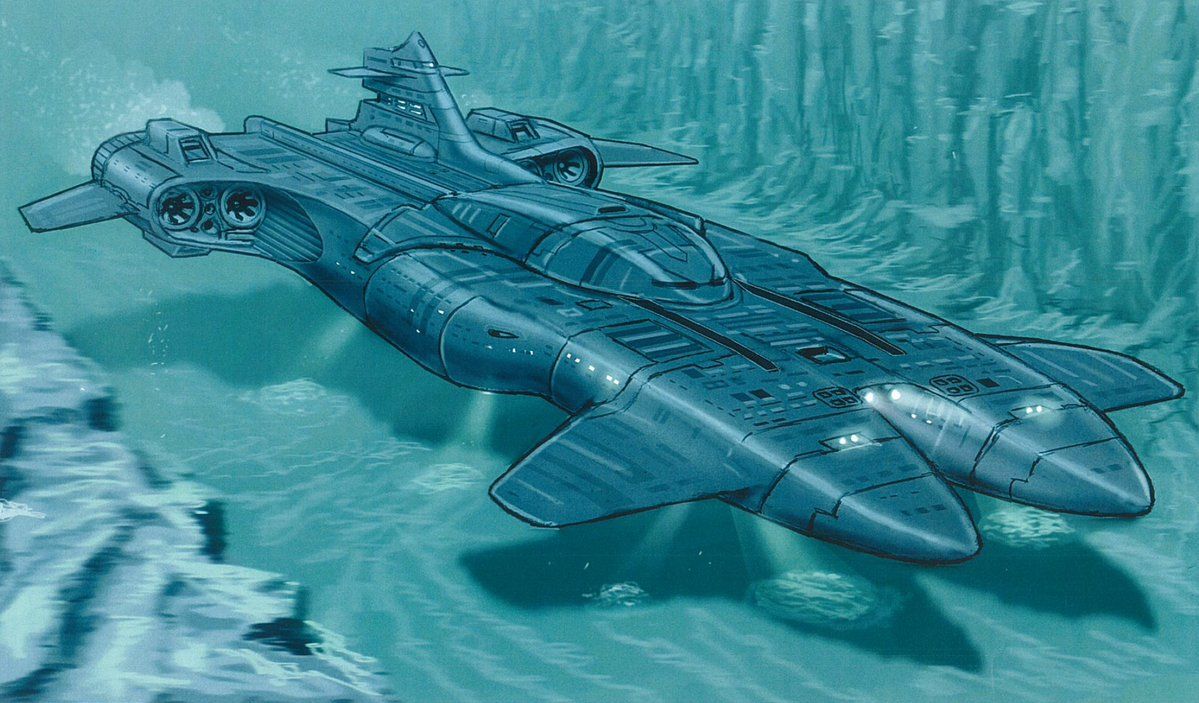 The abyssion draws huge inspiration from traditional submarines, but are modified to better suit the differing environments in the Abyss. The two largest being a lessened focus on hull strength, as the pressure in the Abyss is much lower than Dunian deep seas and a huge reinforcement in coolant and heating systems, as the Abyss is deathly cold for the most part. An abyssion vessel must be able to not only withstand consistent hull temperatures of -60C, but also be able to keep the crew comfortably warm without consuming too much power in the process.

An abyssion's design depends largely on its purpose. Traditional Dunian submarines were either built for exploration and science, or for warfare. When it comes the gigantic industrial exploitation of the Abyss, more industrial type vessels were required.

The majory of abyssion models are transport vessels designed either to ferry large amounts of raw materials, construction materials or personnel.

Warfare is much less of a concern now that multiple geopolitical operators no longer exist, but it's still something of a concern, seeing as there is no good way of policing the Abyss, leading to some megacorps taking advantage of the lack of oversight. While most megacorps are "at war" with one another in some way, outright hostilities are nearly unheard of outside of truly clandestine operations. The Abyss changes that somewhat.

While most abyssions are transport vessels, most also come with some form of self defense in the form of torpedoes, SONAR scramblers and stealth technologies. Detecting an abyssion in the depths of the Abyss can be a challenge and mostly relies on tracking vessels based on the noise they make as they traverse the depths. There can also be some gain in tracking heat trails, but because of the exceptional temperature differences, the trails very rapidly dilute in the Abyss, making it useful only in very close proximity.

The standard armament and defense options for abyssions include 65mm torpedo tubes, standardized for hundreds of years. The modern torpedo shares much with its primitive ancestors and they really haven't changed much in the hundreds of years they've been in service. Tracking device, engine and a large bit that goes boom.

Stealth usually includes the ability to turn the abyssion "dark", meaning to cease all active operations to make the vessel as quiet as possible. The fully battery-powered abyssions can become 100% silent, provided their crew don't make a racket, as they can be fully shut down without any operation on board. They are virtually impossible to detect without active SONAR. However, powering down an abyssion to that point puts the crew at risk of hypothermia within a relatively short timespan, unless it's in a hotter, volcanic region of the Abyss.

Type
Abyssian Transport Vessel
Purpose
Transporation of material and personnel through the Abyss.
Propulsion
Primarily battery powered, but nuclear and biofuel variants exist.
Armament
1-4 65mm torpedo tubes. Most transport models are unarmed.
Major Manufacturers
Arcom Solutions
Boryx Engineering
Size and displacement
Varies greatly. Largest models are just shy of 100 meters long. Due to the size of the Abyss Gate, models can't be much larger than that.
Used by

An Abyss Gate is a gigantic harmonic resonator coupled with a sophisticated airlock. It's purpose is to allow submarine vessels to pass the world dome into the Abyss.

Dunia is the established name for the world. It refers to everything inside and around the world dome. The Kykr use it like we use "Earth".

The Arcom Nixie is a popular personnel and cargo carrier for use in the Abyss.