Created by: Jossmoo
Played by: Jossmoo
Captain of the Blue Falcon and ally of the Wayfinders, Solanos is a man who is focused more on himself, the job, and his crew rather than the fate of the world and the battle against the rifts. However, the Wayfinders have rubbed off on him and he keeps finding himself engaging in their kind of trouble. Through it all though his priority is to protect his crew, those on board, and get safely back to shore.

Residing with the rest of the crew in the Wayfinders' manor at Astraeus Falls to oversee its restoration. He intends on taking more ferrying and trade opportunities soon in order to keep Caspian on the move and keep him safe.

Upon closer look, scars could have been seen all along his left arm from the back of his hand all the way to his shoulder. As of late, the scars have been somewhat healed though not completely gone as a result of Reylan's tending allowing him full range once more with his left arm.

He has mentioned it to the party that he was a student at Relin'kor, the war mage academy of Ithliond.

A freelance captain of an old Ithliondian warship that has long seen its glory days, Solanos sailed with his crew from port to port to pick up contracts in order to earn coin. His previous contract had been with the Vigil of Batun to ferry across a small group of adventurers whose aim had been to save soldiers that had been captured in Barisea-- the country across the Strait from the Isle of Mercy.

After completing the job, he decided to stay in Batun holding off on accepting new contracts in order to remain on shore with the cleric, Reylan. His involvement with her led to his eventual recruitment by Bruu of the Amber House to be escort of the party as they sought to journey around the coasts of Barisea to eventually head to the Wastes.

Judging by the uniform that Reylan discovered in his room, she guesses that he had indeed earned the military title of Captain in Ithliond's navy.

He has a deep rooted fear of burning and is adverse to standing too close to open flames, as indicated by the scars that once fully covered his left arm-- now mostly healed by Rey to allow movement-- which he suffered from a terrible incident.

According to Reylan, Solanos had encountered the Rasa first as a teenager on the coasts of Ithliond during what he thought was just a typical caster raid-- but turned out to be a Rasa rift raid. He has carried a hatred and slight fear of them ever since and had warned Reylan of what she and the party could face should they ever encounter them. It was this very warning and knowledge that gave Reylan and the party an insight into the enemies they would later find.

He is quite knowledgeable of lore, magics, fighting tactics, and seafaring-- though according to him (as Nyx tells the story), he "knows" he is not a good sailor and seems to forget the simplest things sometimes.

When it comes to issues out on the sea, Solanos is more than willing to help especially if trouble can be confirmed off in the distance. Though he would rather avoid conflict so as to spare the ship and crew, he is well aware of when it can't be avoided and will do his damnedest to assist his crew and friends. He seems to loathe pirates and raiders and has no trouble hurling storms and lightning on any that dare attack the ship.

As Captain of the Blue Falcon, he seemed to have an authoritative attitude about him that he held strict to and barely humored the crew or even slight shenanigans that seemed to happen on the deck of the Falcon. This attitude lightened up after weeks of accompanying the party and seeing how open the others were with each other though Reylan's upset disposition of having to deal with two sides of him did somewhat reshape the way he interacted with the others. However, while he is more open with his old crew and the Wayfinders, he holds onto the strict and stern attitude of a ship captain while in the presence of new crew-- which as of late includes seasoned sailors, Devona and "Jolly", and a teenage drow, Caspian.

He actually has a blue falcon by the name of Daro that isn't social much except with others in the crew.

He's got a southern coast Ithlondian accent which sounds like a mix of southern and Texan. 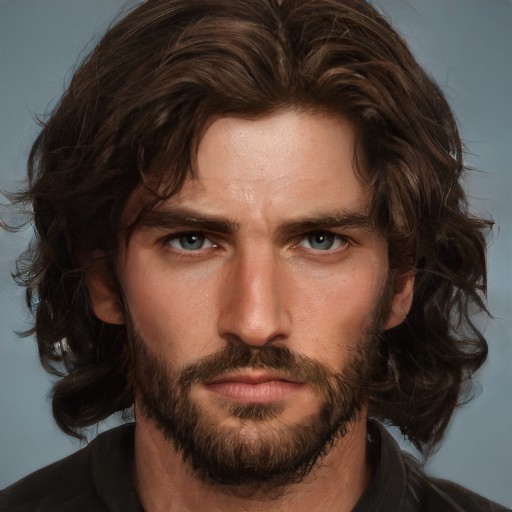 Captain of the Blue Falcon who happened to cross paths with the party by a stroke of good luck and has aided them ever since.