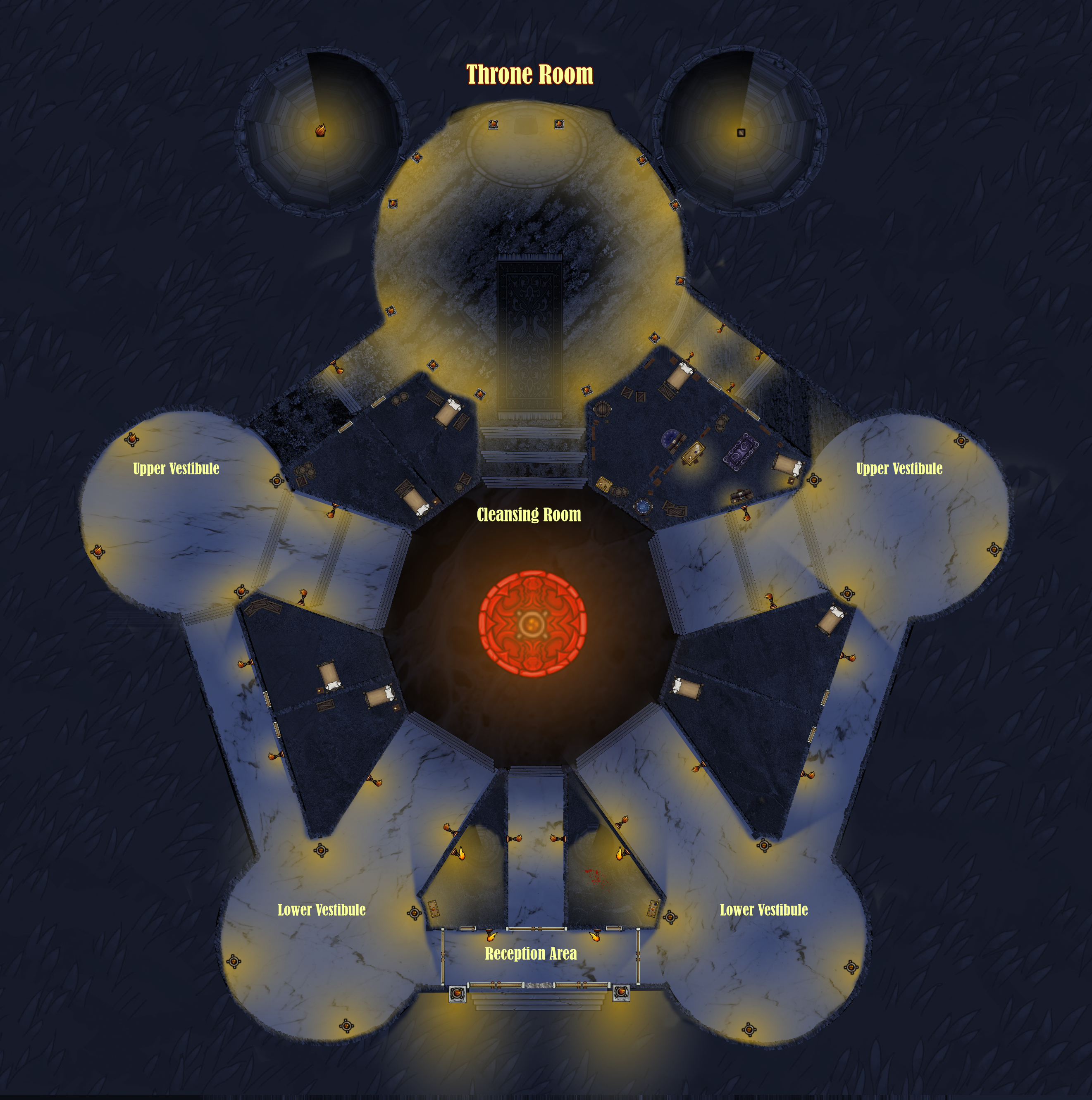 The original urpose of the building is unknown. Currently, it is the site of the main Dyan Temple, which houses and and protects the Qanaviaro and Qano Gekui (Holy Ruler) of the Dyan.

It is hard to say what alterations have been made to the building, as the Dyan rarely allow any non-Dyan inside, and certainly not past the recpetion area unless escorted. From the exterior, the building does not seem to have had any structural changes, except for the odd repair here and there. For a building that is believed to have survived The Cataclysm, it is in remarkably good shape.   One item that is obviously not from the building's original use is the stained gladd window which acts as a beautiful backdrop in the throne room. The window's current design depicts various symbols of the Dyan as well as depictions of technology and destruction. Since the Dyan were not formed unti after the Cataclysm, this window must, by necessity, be newer, and in any case, would not have survived the blast.

The exterior of the building, as well as what most have reported from the inside, appears to be rock mined from the nearby Rinzeremel Mountains. It is a a hard, igneous rock that can last centuries with little or no wear. As such, it also requires experienced masons to cut and place. The joints between the stones in the exterior walls seem to have been cut with amazing precision, but many have moved over time. Some may have been shifted by the bast of The Cataclysm, while others may have been moved by earthquakes or other natural forces.   From the outside, it appears to be made of five main towers reaching as high as 50 feet, with two smaller towers flaking the stained glass window and the throne room. It is also believed that there are mutliple levels below ground, but only those in the highest levels of the Dyan are permitted to see below the ground level.

it is unknown what the original use of the building was, save that it appeared to be related to the five exterior towers. The Dyan made thie building the center of their faith in 2874 BTG, after a Dyan missionary found it tucked away in a clearing in the Rinzeremel Mountains. Over time, it is believed they cleared away tons of rock that had fallen around the building as well as clearing away debris from the centuries after The Cataclysm.   Now, the building sits alone. The Dyan have laid claim to the land surrounding it, giving them a buffer from the outside world.

There is no tourism to the Temple of Cleansing. In fact, most people have no desire to ever see it, if the rumours about what happens there are true.

Important Note: Page Styling Is Currently Being Updated. Most changes should work fine, but if they do not, please leave a comment on the specific article So I can troubleshoot. Also, let me know if you are on a computer or mobile. Thanks!
— Kahuna The Elder