The fruit that nurtured a planet

Quwi saved the world from famine, but you must wait.

Eating it too early will bring a deadly fate.

- Baduhmian warning poem.
The Quwi, or Survivor Tree, was one of the few types of flora that not only survived, but thrived through The 30-Year Winter.   Originally a simple variety of apple tree, the Quwi was uniquely suited to the dismal cold. But the apple tree underwent some significant changes caused by the exposure to fallout from The Cataclysm. The trees became much larger, and the fruit and flowering changed significantly. 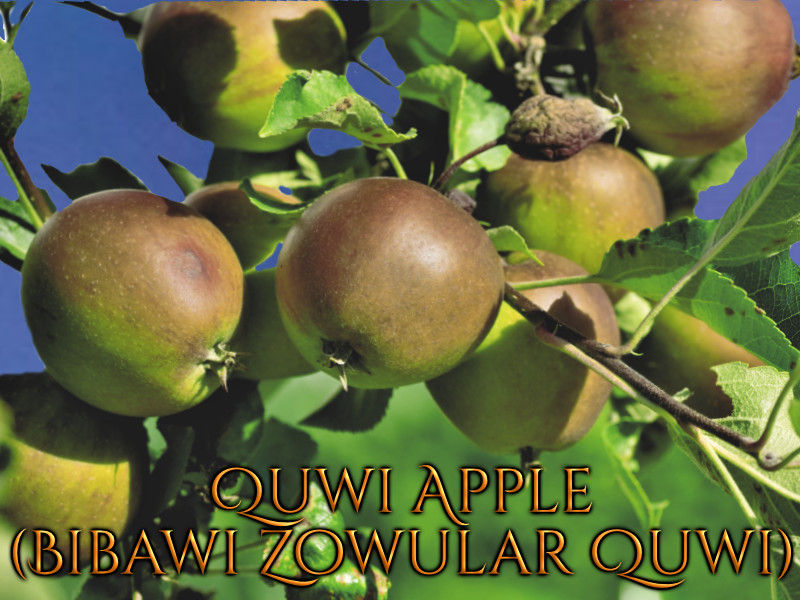 The fruit can be extremely nutritious when ripe, and this nutritional value is what helped many Urnatis recover when they emerged from their shelters after the 30-Year Winter. But lessons were learned about the mutation as well.   If the fruit is eaten before it ripens, it can be deadly, as many Urnatis discovered. The unripe fruit has a poisonous trait that attacks the gastrointestinal system of most species, resulting in severe dehydration and stomach cramping, followed by extreme flatulence. If an individual can survive the poisoning, there is a high likelihood they will experience some form of nervous system damage, from memory loss and loss of body control to personality changes and physical tics.   The Quwibiril bird will eat the unripe fruit unharmed, but will not eat ripe fruit. This is the clue that fruit is safe to harvest. The bird's gastrointestinal tract features an enzyme that neutralizes the poison. The birds are partial to the male fruit, which contains the most seeds. This is the main method of propagation for the tree.   During ripening, the poison ferments and loses its toxicity. The intense flavor of the fruit, known as the Quwi Apple, is created by this fermentation. If the fruit is used as a base for a drink, such as a mead, the additional fermentation further intensifies the flavor, and creates a potent alcoholic drink. Animals who eat fruit that has fermented are often found acting strangely or asleep under the tree. More than one squirrel has eaten an overripe Quwi apple, only to fall from the the tree in a stupor.

"These cursed rodents are always getting knackered on me apples. I hate havin' to step over 'em like furry puddles"
— Baduhmian Apple Farmer

In the first years after the Cataclysm, Urnatis were unaware of the poisionous nature of the unripened fruit. Now, centuries later, deaths and even illness from eaten unripened fruit are rare, and usually happen with children who have not been properly warned away. Most children are taught fairly early that if the bird will touch the fruit, the child should not. In fact, children are encouraged to make water basins out of clay to attract the Quwibiril, who are an excellent indication of whether the fruit is safe or not.

Originally a fruit tree, the Quwi was genetically modified by the fallout of The Cataclysm. Trees survived the blast, but the genetic modifications caused it to increase from its original size by 5-fold. The original trees were 10-15 feet tall. Now the trees stand 50-80 feet tall. The trees were cold-hardy by nature, prior to the Cataclysm, which served them well during the The 30-Year Winter.   The trees form a thick trunk, with proportionally thick bark. The bark acts as an insulator, modulating extremes of temperature and protecting the tree. From the trunk, thick branches reach out horizontally. From these, thinner branches spread. Most are sun branches, filled with leaves to capture the light from the suns. The remainder are fruiting branches, which tend to be slightly thicker than solar branches to support the weight of growing fruit.   Solar branches do carry some of the male fruit, but as a rule, fruit is primarily found on fruiting branches.   Fruit only grows on lower branches, witht the top 1/3 of the tree devoid of fruit.

The bark of the Quwi is very hardy, and works to insulate the tree. The bark generates from center of the tree outward, and after the 5th year, the outer layer is shed without harm to the tree. This shed bark is often collected and used for insulation in buildings and items such as mattresses. It is soft, and does not compress easily, retaining the air pockets that make it a great insulator.   The wood of the Quwi is a hardwood with fire resistant properties. It makes for durable furniture and construction, and burns poorly. However, the tree is also considered sacred, as many who survived the Cataclysm ate the fruit when they emerged from their shelters. Trees are not to be felled unless they have been damaged severely, have fallen of their own accord, or have stopped bearing fruit entirely. 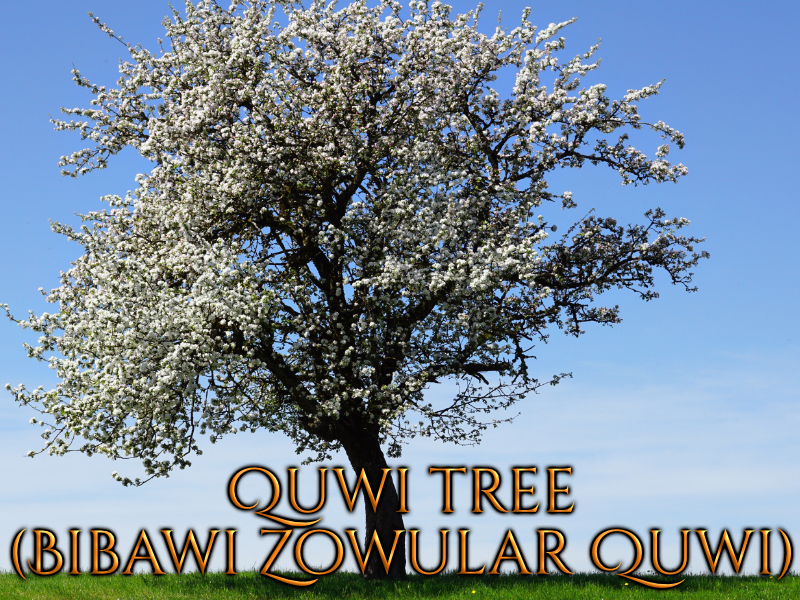 As part of the genetic modifications the trees underwent, the fruit was also modified. Whereas before the Cataclysm, male flowers carried pollen that would be transferred to female flowers, they have become hermaphroditic, and now the pollen is produced and pollenates within the same flower. The fruit however, does display difference in gender. The "male" fruit is smaller, and carries the seeds of the tree. The female is larger, with sweeter flesh and very few, if any seeds.

The main trunk of a Quwi grows slowly, thickening to 10 inches across before any fruiting branches are set. The tree has an almost mushroom shape to it naturally. The canopy grows thick, which provides plenty of solar branches for growth and protection of the fruiting branches when they come in. It takes approximately 5 years for the tree to begin to grow fruiting branches, and at this stage, growth begins to accelerate. By year 5, the tree is approximately 10-12 feet tall. By year 10, however, the trees average 35 feet tall and are approximately halfway to full height. Trees reach their full height by their 15th year, stretching to as much as 80 feet tall and a canopy that spreads up to 65 feet in diameter.   Fruit set is vigorous, and is a reason for the tree's height limitation. Once a tree gains a certain size, the amount of energy directed to fruit production is sufficient to slow the energy directed to growth.   Quwi have been known to grow for hundreds of years, and a small grove near the Baduhm/Orsholon border has a few specimens that are believed to trace back all the way to the Cataclysm.

Quwi grow best in climates that feature at least 80 chill days per year. That is, at least 80 days where the temperature dips below 40 F/ 4 C for a period of at least 4 hours (320 chill hours).   Their size tends to occlude light, thus preventing any growth underneath them with the exception of shade-loving plants, such as ferns. They like firm soils that are well drained and do well in rocky and sandy soils. Growing in orchards is very difficult due to their size. However, some have been successful in creating platforms underneath the trees that allow access to higher branches for harvesting.

The tree is dormant through the end of the autumn months and winter. In early spring, new growth begins to form and new buds emerge from the branches. The majority of these will be leaf buds, which will grow to provide the energy required for setting fruit later in the year.   Summer is spent thickening and adding foliage, with the tree's energy focused on maximizing leaf and branch growth.   Late summer, the tree begins to set fruit. The male fruit set first, followed by female fruit 7-10 days later. The harvest is typically in late autumn, with all fruit maturing in a 2-week period.
All Images created BY Kahuna the Elder, with source materials from Pixabay, Pexels, Unsplash, Artbreeder and public domain sources.
Genetic Ancestor(s)
Scientific Name
Bibawi Zowular Quwi
Origin/Ancestry
Fruit tree that was significantly changed genetically after the Cataclysms
Lifespan
>400 years
Average Height
55-80 feet
Geographic Distribution

I loved the description of how its properties change over time, and totally loved the bit about the drunk squirrels. Excellent work!

Thank you so much!!!

This was a really nice article. The small poem was a great way to start. I liked the idea that the birds help the people to see if the fruits can be eaten.   The drunk animals and the quote about it was just great. You had me laugh while reading that one. Nice read!

Thank you so much! I try to have a little humor in each article if appropriate!

These are neat, really useful food and interesting way to gauge whether it's safe to eat. Slight note: I spotted two 'the the'.

Now I need to go back and look for those! Thanks!