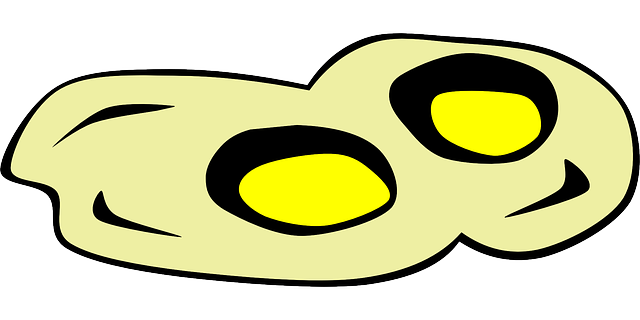 EGG SPLAT Melee Weapon Attack: +5 to hit, reach 5ft., one creature. On a successful hit, the fried egg wraps itself around the target's head. The target is blinded, deafened, and muted. Unless the egg is killed or removed from the victim, the victim must make a CON SAVE: 14 each turn to not passout. If they fail, the victim falls prone and begins rolling Death Saves until they drown in runny yoke. The victim can try to break free once on each of their turns with a STR DC: 14. This deals 1d6 + STR (of victim) bludgeon damage to the Flying Egg.   MELTED BUTTER SPIT Can be used once per encounter. Range Weapon Attack: +5 to hit. Range 20ft., one creature. On a successful hit, the target takes 1d4 fire damage Fire Damage and has disadvantage on their attacks for the rest of the encounter as they are now covered with slippery butter.   On a failed hit, melted butter strikes the ground at their feet, covering the ground of their 5' space with slippery butter. To move they must first make an Acrobatics or Athletics DC: 14 or stumble, reducing them to a movement speed of 5 for that turn only. If they roll a Nat 1 they fall prone onto the slippery butter and can't try to use their movement again until their next turn. An additional Acrobatics or Athletics DC: 14 is required to stand up.

A fried egg some two feet across that flies through the air like a manta ray.