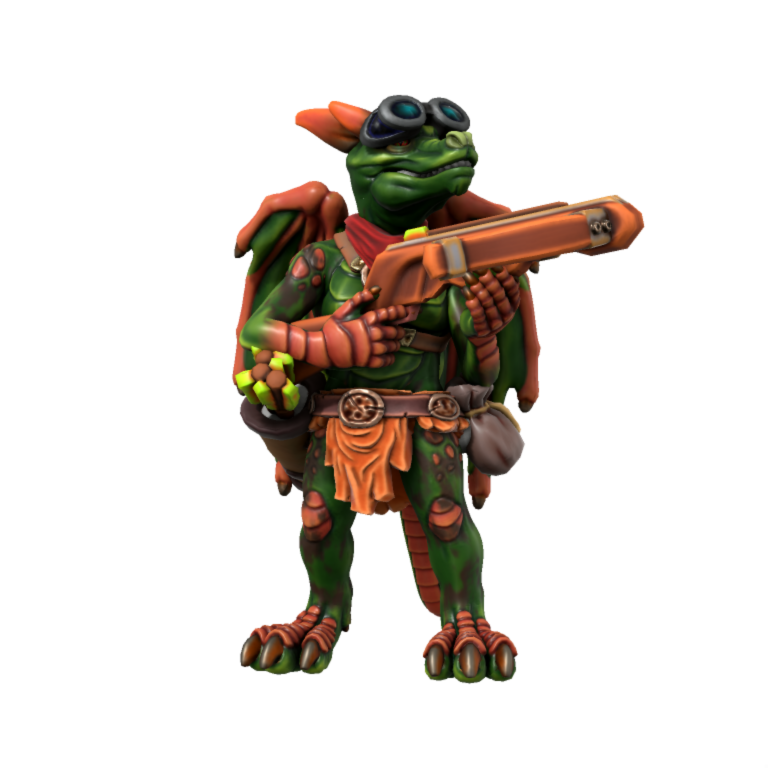 by Dazzlinkat
Senses
Darkvision: 120' Bright Vulnerable: when in bright light or daylight, all her attacks AND perception are at Disadvantage UNLESS she is wearing her Goggles of Day (which she wears on her forehead when not in use).
Passive Perception: 16
INITIATIVE: +4
Languages Draconic, Common, MoorDoon's Cant (Nissling sign language)
Proficiency Bonus +2
Challenge Rating L3

Whuduss A.K.A. Seeks   BACKGROUND: A blending of Folk Hero and Pirate
I learns to hunts in the Basswood Scrubs with mys tribe, Three Trees. Why Three Trees? No matters, its hush hush! Hunting is tricksy business with big beasties and peoples stomping about, but they coulds not evade me.
One nights a bear eats a Three Trees trapper. I hunts it all alone and tribe names me Great Hunter of Three Trees.For more years I hunteds the Basswoods but hunts grews stale so I lefts to hunts the Elsewheres.
I wanders long until finding the Moonwaker, a ship that hunts ships! Oh, joys! The greatest of hunts!   LINK FOR THE TOKEN IMAGE (not the full-body image here): https://www.worldanvil.com/uploads/images/202c86a8fdbefd7f92dfdd85a94c6055.png

I ams Great Hunter and ships are my prey.

Spell Slots: Level 1=3
Spell Save DC: 12.
Spell Attack Modifier: +4   LEVEL ONE SPELLS   Cure Wounds: Cast by Touching target. When Seeks touchs a creature, it Regains HP: 1d8 +2   Hail of Arrows: Can be cast as Bonus Action. CONCENTRATION up to 1 minute.
The next successful ranged attack that Seeks makes within the spell's duration, the target AND all other creatures within five feet of the target roll DEX DC for 1/2 damage from 1d10 Piercing Damage.   Hunter's Mark: Can be cast as a Bonus Action. CONCENTRATION up to one hour. Range: 90 feet. Seeks can cast a mystical mark upon a target within range. Whenever Seeks hits that target with a weapon attack add 1d6 to the damage. If the target drops to 0 hitpoints, on the next turn, Seeks can move the mark to another target using a Bonus Action as long as the spell is still going and the new target is within range. Seeks gets advantage on Perception and Survival rolls vs the marked target.

NISSLING FEATURE: Bright Sensitivity
When in Daylight or Bright Light Seeks has disadvantage on all attacks unless she is wearing her Goggles of Day (which are on her forehead when not in use).   NISSLING FEATURE: MoorDoon's Secret
When the uses of the poison are gone, Seeks must make another batch. 50 gold and 1 day for Scumfroggo makes 10 uses. 100 gold and 2 days for Snakesnapper makes 8 uses. These are each carried in a flask.
Once per turn as a free action, Seeks can add a poison to a crossbow bolt or cutlass. The effects do not stack and the most recent poison added will cancel out the previous poison.
1) SCUMFROGGOO 10/10 uses.
When a target takes damage from the weapon attack, the target must roll a CON DC: 11 or Sleep for 10 minutes. Remains until a successful hit is made or its washed off. Cannot be applied to Natural Weapons.
2) SNAKESNAPPER 8/8 uses.
When a target takes damage from the weapon attack the target must roll a CON DC: 13 for 1/2 damage from 3d6 Poison Damage. Remains until a successful hit is made or is washed off. Cannot be applied to Natural Weapons.   NISSLING FEATURE: Pack Tactics Seeks has advantage attacking a target while an ally is attacking the same target in melee (within 5').   NISSLING FEATURE: Multi-Attack
When in melee combat, Seeks can attack twice with Natural Weapons with an Action.   NISSLING FEATURE: Finesse Combat
Seeks uses DEX for Natural Weapon attacks and damage.
FOLK HERO FEATURE: Rustic Hospitality
Seeks can find a place to hide, rest, or recuperate amonst any common folk until she has proven herself a danger to them. The common folk will shield her from the law or anyone else searching for her, though they will not risk their lives for her.   RANGER FEATURE: Fighting Style: Archery
Seeks gains +2 bonus to ranged attack rolls.   RANGER FEATURE: Deft Explorer: Canny
Seeks has chosen Expertise (double proficiency) for the skill Perception.   RANGER FEATURE: Favored Foe
Concentration but does NOT use a spell slot. For 1 minute Seeks can choose a target to be her favored enemy. The first time that Seeks successfully hits this favored enemy on each of her turns, she can add 1d4 damage to that attack.   RANGER FEATURE: Primal Awareness
Seeks has learned Speak With Animals and can cast this spell once per long rest WITHOUT using a spell slot. This spell does NOT count towards the number of ranger spells Seeks knows.
Speak With Animals: Cast on self only. Lasts 10 minutes.
Seeks can comprehend and verbally communicate with beasts.   RANGER: HUNTER FEATURE: Hunter's Prey: Colossus Slayer
Once per turn, when Seeks hits a target with a weapon attack and the target is below its maximum hit points, Seeks can add 1d8 damage to the attack.