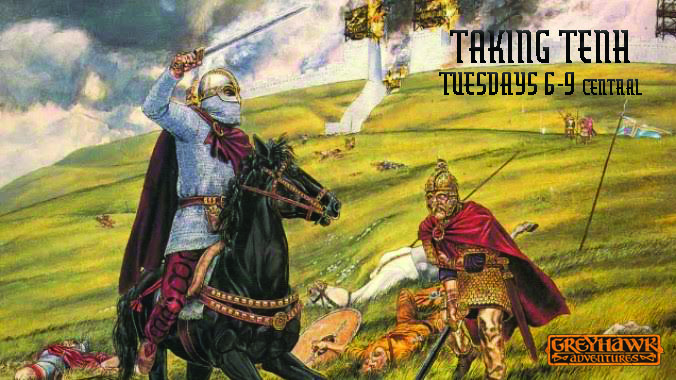 There's nothing I like more than a good mystery/secret.
Personality Traits
Knowledge. The path to power and self-improvement is through knowledge.
Ideals
It is my duty to find and protect others like myself.
Bonds
I am easily distracted by the promise of knowledge.
Flaws
Darkvision - Thanks to your elf blood, you have superior vision in dark and dim Conditions. You can see in dim light within 60 feet of you as if it were bright light, and in Darkness as if it were dim light. You can’t discern color in Darkness, only shades of gray.
Fey Ancestry - You have advantage on saving throws against being Charmed, and magic can’t put you to sleep.
Arcane Recovery - You have learned to regain some of your magical energy by studying your Spellbook. Once per day when you finish a Short Rest, you can choose expended Spell Slots to recover. The Spell Slots can have a combined level that is equal to or less than half your wizard level (rounded up), and none of the slots can be 6th level or higher.
Lucky - You have inexplicable luck that seems to kick in at just the right moment.
You have 3 luck points. Whenever you make an attack roll, an ability check. ar a saving throw, you can spend one luck point to roll an additional d20. You can choose to spend one of your luck points after you roll the die, but before the outcome is determined. You choose which of the d20s is used for the attack roll, ability check, or saving throw.
You can also spend one luck point when an attack roll is made against you. RolI a d20, and then choose whether the attack uses the attacker's rull or yours.
If more than one creature spends a luck point to influence the outcome of a roll, lhe points cancel each other oul; no additional dice are rolled.
You regain your expended luck points when you finish a long rest.
Library Access - Though others must often endure extensive interviews and significant fees to gain access to even the most common archives in your library, you have free and easy access to the majority of the library, though it might also have repositories of lore that are too valuable, magical, or secret to permit anyone immediate access.

You have a working knowledge of your cloister's personnel and bureaucracy, and you know how to navigate those connections with some ease.

Additionally, you are likely to gain preferential treatment at other libraries across the Realms, as professional courtesy shown to a fellow scholar.
Divination Savant - Beginning when you select this school at 2nd level, the gold and time you must spend to copy a divination spell into your spellbook is halved.
Portent - Starting at 2nd level when you choose this school, glimpses of the future begin to press in on your awareness. When you finish a long rest, roll two d20s and record the numbers rolled. You can replace any attack roll, saving throw, or ability check made by you or a creature that you can see with one of these foretelling rolls. You must choose to do so before the roll, and you can replace a roll in this way only once per turn. Each foretelling roll can be used only once. When you finish a long rest, you lose any unused foretelling rolls.
Features & Traits

Gwylim winged back after midnight, dropping breathlessly onto the Argus' rail near where Wryn sat cross-legged.

<Master, my wings are going to fall off! You've never had me travel so far. And at night! I could have been eaten! I'm pretty sure a wyvern followed me for over 5 miles! But never fear, I shook him in a copse of trees before I continued back here. I wouldn't want him to sting you to death, dear master... After all, you've treated me so well these past weeks...> 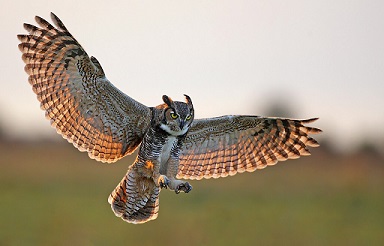 Wryn's expression was a study in unimpressed, forced patience. "How very kind of you, dear Gwylim," came his response, dripping in sarcasm. "Please continue - with useful information this time."

<You have no appreciation for the dangers I've faced tonight, Master!> Gwylim sulked.

"Stop being so dramatic; you can't die," Wryn reminded him.

<You think I don't feel pain?! Gwylim screeched in his head. You try streaking toward the earth like a burning comet and THEN tell me I'm being dramatic!>

Wryn sighed. "Fine. When we get back to Redspan I will release you to spend a whole day in the Widom Ethlam's windowsill pecking at her pies."

Wryn eyed the bird, irritation building. "Yes, Gwylim. Now do not test me further. Tell me what you've seen."

Gwylim's feathers ruffled and he preened under a wing a moment before continuing.

<Thank you, Master! OK, where to start...? Well, I found a delicious patch of blackberry bushes while resting for a few...>

Gwylim trailed off as he noted the whites of Wryn's eyes.

<Oh, you wouldn't care, right... OK, well, I'd flown maybe 20 miles when I noted campfires up ahead. As I got closer I circled a small ship, very similar to this one. It was anchored in a cove, well hidden around a bend along the north bank. I only saw the torches on it since I was maybe 300 ft above the river, but you wouldn't see it from the river, even at night. The banks are high and thick with trees.>

Gwylim paused a moment to gauge Wryn's expression before continuing.

<There was a body floating in the cove, Master. Headless. What I could make out of the body told me it was dressed similar to the sailors on the Argus. On that ship's deck were four sailors bound to the mast and three men patrolling the deck with crossbows in hand, wearing mail.

There was another patch of firelight maybe a quarter-mile west along the river, also. It turned out to be a camp. The camp has two wooden palisade walls, ten feet high, maybe sixty or seventy feet on a side - facing north and west. There are two towers set into the northwest and northeast corners that stand five feet higher than the walls. In both walls there are gates maybe ten feet wide with double doors made of stout timbers - just like the walls. The north gate is blocked by a large covered wagon. The other two sides are bordered by ten-foot ledges dropping into water. A narrow wharf juts out maybe twenty feet into the river. I can't be certain, but I think even a ship the size of the Argus could dock there.

There's another covered wagon in the center of the camp, a few handcarts and two cages. Supplies in boxes and sacks were scattered throughout the camp. There's also a platform five feet high along the riverbank. I noted five tents pitched inside the walls - one was large, maybe ten to twelve feet on a side.

I saw only three humans patrolling the walls, another walking the wharf and a fifth stepped out of a tent to relieve himself. There was one more in a cage.>

Gwylim hopped from one clawed foot to another, pleased with himself.

"Nice work. Let's get below deck, where there is better lighting, and I will draw up a detailed map for the rest of the crew." 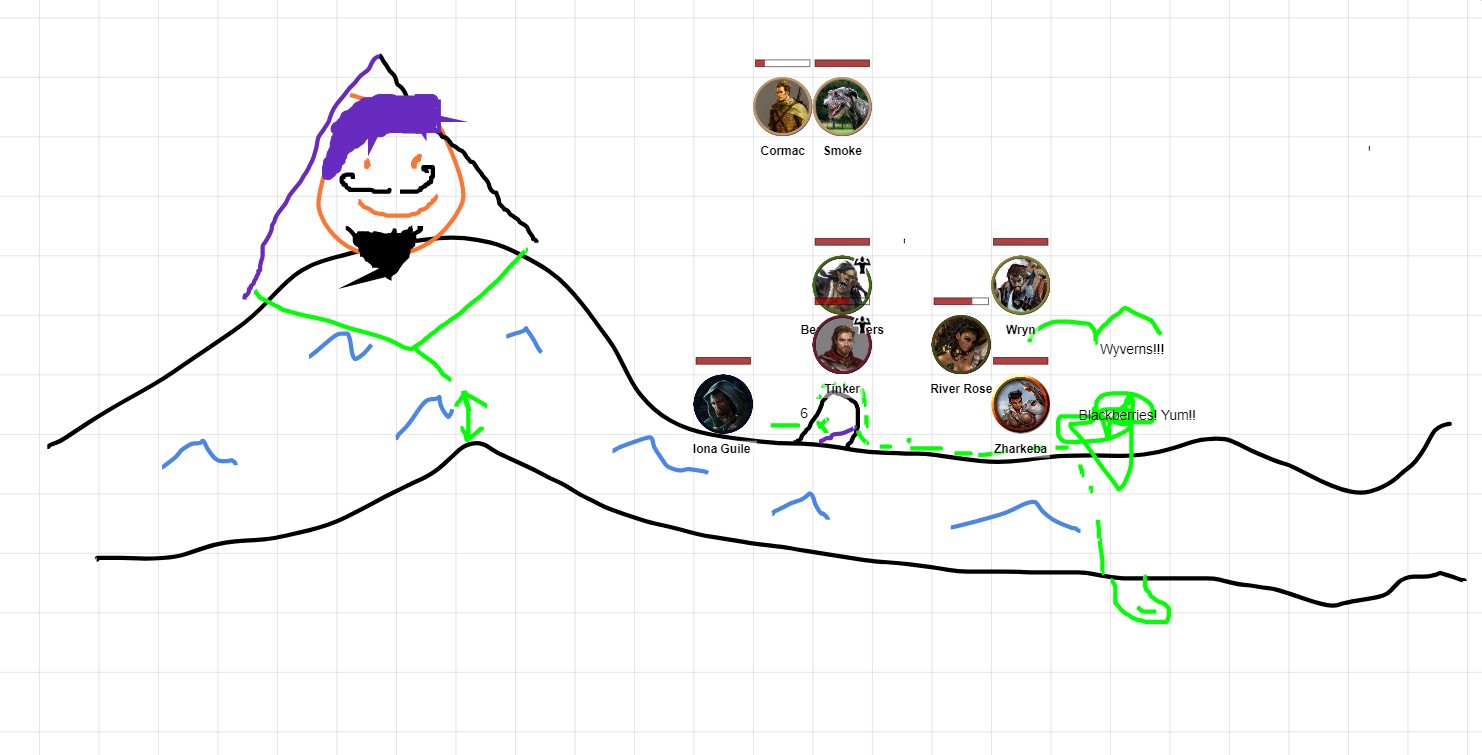 The major events and journals in Wryn's history, from the beginning to today.

The list of amazing people following the adventures of Wryn.