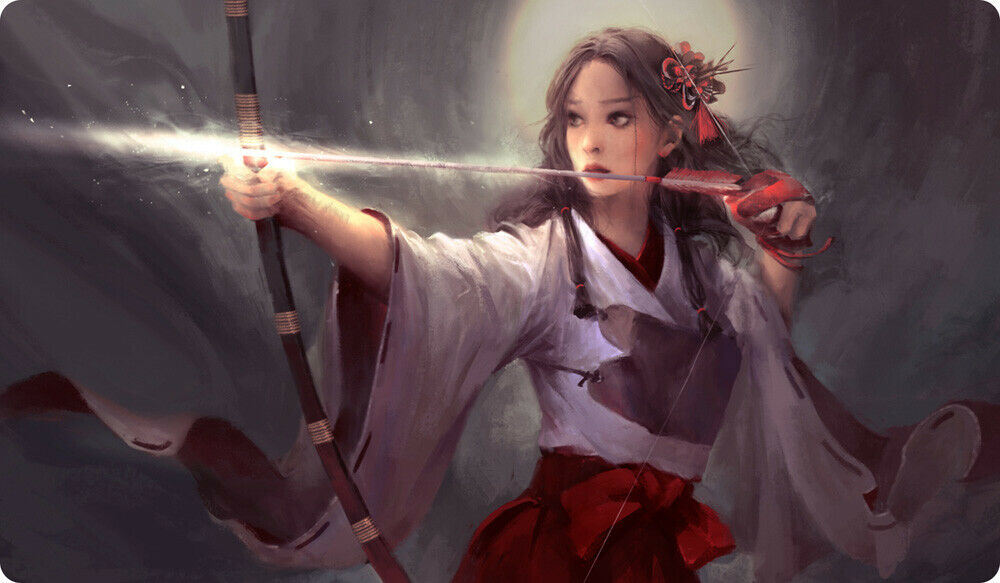 What Does yourcharacter know?
All Phoenix Clan characters have a greater awareness of the following topics:

What Does Bushidō Mean to Your Clan?

Kaito Shrine Keepers work alongside priests to protect
temples across Phoenix lands, or keep smaller shrines
on their own. The Kaito learn mystical arts to propitiate
the kami—sometimes even serving as vessels for them—
and practical ones to maintain the shrines. Shrine Keepers make use of protective magic—such as ofuda, paper
charms—and spiritually enhanced archery to defend
shrines against threats both mystical and mundane.

While most bushi are expected to be proficient in the use of the bow, some are terrifyingly accurate, capable of hitting targets well beyond the expected engagement range.

Activation: When you make a Martial Arts [Ranged] check, you may spend (opportunity) in the following way:
(opportunity)+: Treat the range of the weapon as 1 higher per (opportunity)spent this way, to a maximum of range 6.

The shugenja beseeches the air spirits to lash out all around them, calling buffeting winds to push foes backward or even hurl them to the ground.
Activation: As an Attack action, you may make a TN 3 Theology (Air) check targeting each character at range 2–3.

Effects: If you succeed, blasts of wind smite each target. Each target suffers supernatural damage equal to your Air Ring and must resist with a TN 4 Fitness check (Earth 5, Fire 2) or suffer the Disoriented condition.

Air (opportunity)+: Each target who fails their Fitness check is also pushed 1 range band away from you per (opportunity) spent this way.

Commune with the Spirits Rank 1

The ritualist centers their mind on one of the Elements, appealing to the spirits in their environment and seeking their counsel or boon. Priests and laypeople are able to use this ritual to receive less specific guidance from the spirits, such as a leaf that falls to the ground pointing in the direction of the person or thing they are seeking.

Activation: As a downtime activity or Support action, you may make a TN 1 Theology check using Air, Earth, Fire, Water, or Void to appeal to nearby spirits of that Element (appeal to the departed, such as ancestor spirits, and other non-elemental supernatural presences, if using Void) for aid.

Effects: If you succeed, choose and receive one of the following boons from the spirit or spirits you contacted:

(opportunity): Reduce the TN of your next check to interact with or appeal to kami or supernatural presences of this Element by 1.

(opportunity)+: If you succeed, receive one additional boon per (opportunity) spent this way. Each boon can only be received one time per activation.

The ritualist sanctifies a person or group, anointing them with sacred substances that drive out unholy presences and malign sorcery.

Activation: As a downtime activity, you may make a TN 3 Theology (Void) check targeting up to five characters to remove spiritual contaminants from the targets before they spread. Note that this cannot remove a Shadowlands Taint disadvantage once it has taken hold, but it can prevent this spiritual contamination from taking root after a character is exposed.

Effects: If you succeed, remove the Afflicted condition from the target.
New Opportunities:

Void (opportunity): If one or more targets is an Otherworldly being, you become aware of it after completing the ritual—but you do not know which target.

Void (opportunity)+: Choose one additional target per spent this way.

Void (opportunity)+: Instead of targeting characters, you may target an area that encompasses a number of range bands around you equal to (opportunity) spent this way. Remove the Defiled terrain quality from this area. If it is a deeply unhallowed place that has long been the domain of evil, the Defiled quality returns after one day, plus additional days equal to your bonus successes.

The major events and journals in Kazuma - Antek's history, from the beginning to today.

The list of amazing people following the adventures of Kazuma - Antek.