Found and destroyed the goblin mining camp, run by the Goblin Naga

The darkness grew and faded as time passed. The party changed members once again. Rusticus, Zarish, and Tiddles emerged from their bracelets, while Jah and Opal remained in theirs. To the emerged 3 members, it was as if no time had passed at all.   "Hello good friends!" Exclaimed Tiddles the Partizan, ever the friendly bard.   "WHO THE FUCK ARE YOU" asked Rusticus, in barbarian fashion. Zarish remained aloof, mentioning "I dont remember people who are below me."   Tiddles was confused, not only because he was suddenly in a different place from where he last remembered, but also because his party members suddenly no longer remembered him. "I'm... the bard? we fought jaxton together"   "Oh, right" replied Rusticus and Zarish. It had been some time since that fight, and they had forgotten the fine details.   Now happily reunited with party members and memories, the trio once again brought out Jaxton's map. Before they had all blacked out into their bracelets, a plan had been set forth between Rusticus, Zarish, and Opal -- retrace their steps East, and then continue East through the Mining Camp + Goblins area. They would stop at the skull and crossbones on the map, before trekking all the way to "Crazy Person, lots of Coins". They explained the plan to Tiddles, who agreed, and they set off. 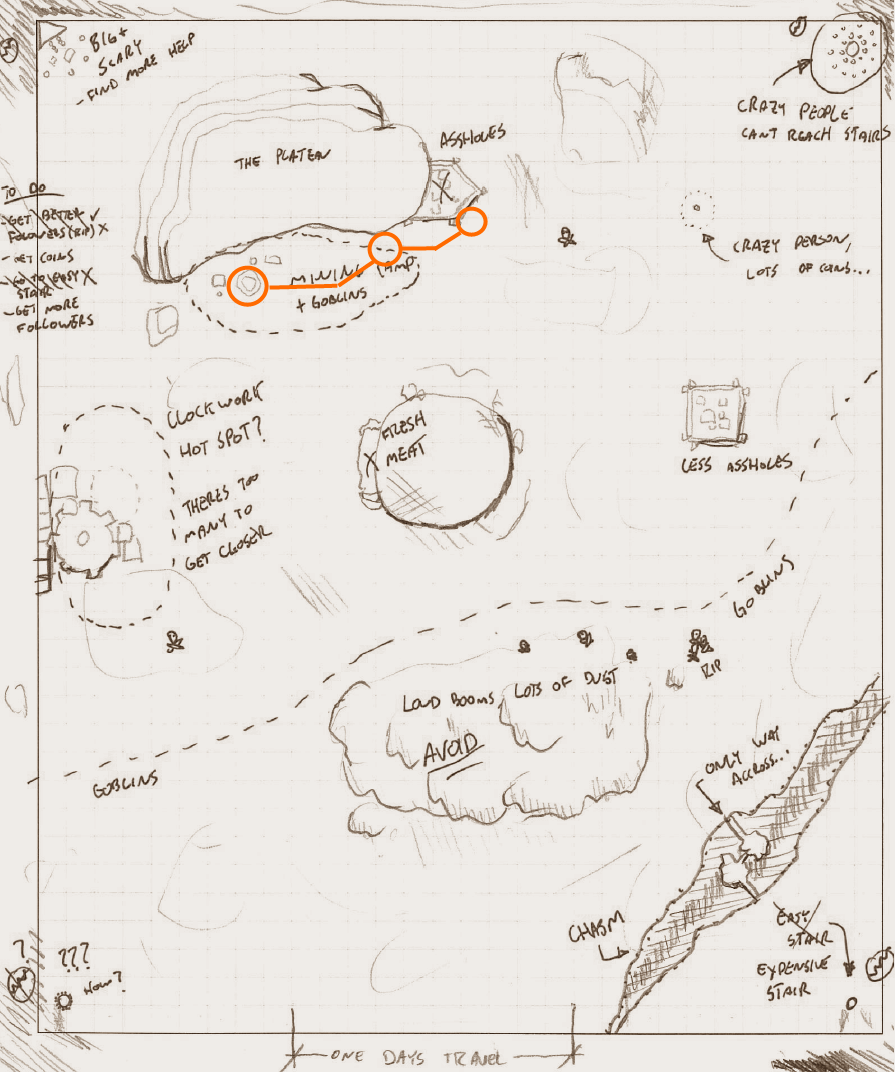 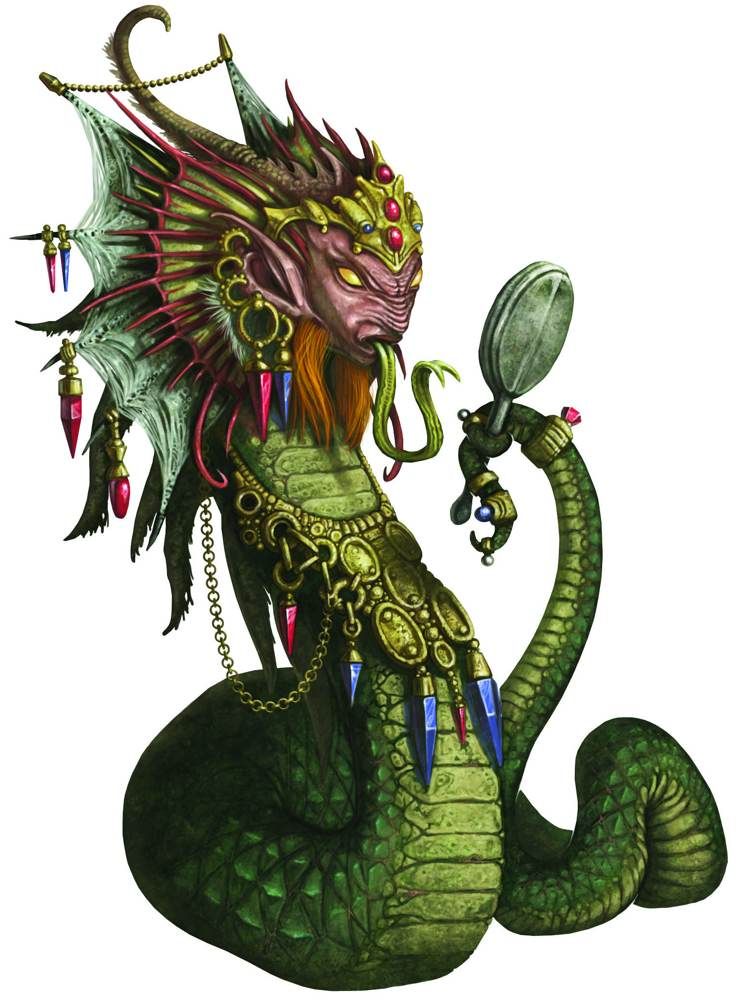 by Paizo Staff. (2009)
The Goblin Naga lifted it's head, and fired a black ray of energy at Tiddles, who resisted the energies as best he could. He still felt his strength sapped from it. Rusticus dispatched the rest of the goblin dogs, and goblin ranger, while Zarish summoned a lightning cloud on top of the Naga. However the naga was too fast, and it dodged the electricity coming from the cloud.   The Naga slithered forward once again, looping past Rusticus and coming up around behind the party, firing red hot rays of energy at Zarish, burning portions of the arcanist. Zarish angrily tossed acid bolts at the Naga, who shrugged them off. Tiddles bashed his drum and sent more waves of agonizing sound out, managing to vibrate some pain into the Naga.   The Naga sped towards the source of it's pain, wrapping its self around the bard, and begun to constrict. The sharp spines on the goblin snake punctured Tiddles's light armor, piercing deep into the bards skin, poisoning him. Tiddles could feel his energy depleting while taking damage.   Rusticus, not wanting to get too close to the scary spiky snake, grabbed another massive wooden barricade. He looked at Tiddles, who was close to death, and saw a look in the bards eyes that seemed to say "holy fuck please please please don't hit me"   The barbarian wound up, and threw the giant piece of wood with all the strength and accuracy he contained, and nailed the Goblin Naga straight in the face. Wood shattered everywhere, miraculously missing the grappled bard. The naga had blood pouring from it's mouth, eyes, and ears, and it released Tiddles. Zarish began throwing more spells at the Naga, managing to scour it with some acid.   The Goblin Naga, confused, and on it's last legs, cast one more bolt of fire at Rusticus, burning parts of him. Tiddles, barely standing, let loose one last blast of sound, liquefying the Goblin Naga's brain, and killing the monster. However, Tiddles was still poisoned, and as it coursed through his veins, it sapped the last of his energy, and knocked him unconscious.   Tiddles lay on the ground, bleeding out, while Rusticus and Zarish stood by.   "You do magic! can you heal him??" asked Rusticus   Zarish angrily replied "I'm not a fuckin white mage! I cast damage, not healing, that's below me." He looked around the goblin camp, and spotted a chest to the north of the fire, and headed in that direction.   Rusticus began to look around as well, before spotting the bag left behind by the goblin tamer. Inside he found a few fireworks and red potion bottles. Not even stopping to consider what was in them, he poured the contents into the dying bard's mouth.   Tiddles, coughing, woke up, and immediately grabbed one of the 3 health potions he had sitting in his bag, and drank deeply, thinking to himself "holy fuck" and "we need a healer"   Zarish peered into the chest, finding a nice potion, scroll, shield, and some magic rope that can be attached to a surface, and used to pull up to the 3 people up. Rusticus rummaged through the other packs left on the ground, finding a couple elixirs of tree shape and speak to animals. The party shared some of the loot between them, while Zarish kept the magic rope for himself.   Seeing as they were at a pre-made camp, the three of them lay down for some well earned rest. Upon waking up, they decided to modify their course of action, and instead of proceeding directly to the skull and crossbones on the map, made plans to stop at the City of Assholes as marked on the map.   They walked for a few hours before finding themselves next to a large brick wall jutting out of the plateau cliffs. Tall round guard towers were placed along the wall in even intervals. Tiddles listened carefully, and heard the sounds of a guard patrol around the corner of the wall. He sneakily walked forward, with Rusticus behind him, and Zarish bringing up the far rear. As Tiddles approached the corner, a guard in mages armor stepped around the corner.   Rusticus panicked, and slammed back his elixir of tree shape, becoming a tree.   Tiddles thought fast and began rhythmically playing a song on his drum, captivating the guard.   "Hey thats pretty neat!" Said Bruce, the guard.   Bruce's guard captain saw that Bruce randomly stopped walking. The Guard Captain walked over to investigate, and Tiddles quickly included the Guard Captain in his spell.   "That IS neat!" said the Guard Captain.   Tiddles changed the rhythm of his beat a bit, intending to make the two guards think of him as a friend. The guard captain immediately agreed, while Bruce the Guard remained untrusting, but still captivated by the neat music.   The drum banged.   The Guards watched.   Rusticus was a tree.   Time stopped.