Fled the City of Assholes, found and dealt with the lone duelist

The Ifrit in the Tavern

Cults, volume 3 By Ryder Kabaleyro   Chapter 1: On to bigger badder cults:   Cult quick notes: I'm currently sitting outside the cult headquarters, recording what I can see. My heart is pounding, as I've figured out how fond of sacrifices this cult is. They're covering themselves in the victims blood. I wonder what that means? I think perhaps I should go talk to them. . . . . . . .

I got some charcoal! Reminder, thank Opal. -Me

i think they sent me to another dimension?   wait. I got away and got blackout drunk and dont remember where I am?   No. I'm dead.   Where is Kir?   I woke up inside some weird dudes pocket I think. Immediately I burst out of that tiny space, along with 2 other people. That's not the most confusing part. The dude was playing some sort of beats on his shield, entertaining some armed men nearby? I first thought I was still dealing with the cult, and perhaps they had poisoned me with some mind altering substance. But it doesnt FEEL like that.   The man playing drums on his shield was very enthusiastic. He keeps telling us we're a part of a band, but I am no musician. However I must admit I was enjoying it quite a bit, but my confusion was greater. I wandered around trying to figure out what was going on. At the time, I didnt even have any way of writing in my notebook!   As I stood there confused, i took in my surroundings. There were 10 people standing outside these massive walls. I looked at the walls, and in doing so, saw that there WAS NO SKY. It was as if I was in the single largest cave I've ever seen. I tried to take in the scenery, but was distracted by yet more people appearing, including the single angriest and scariest woman I've ever seen. She started yelling at some of the people, and then started yelling even harder at the other people. If I were to guess, I'd say half of the group here didn't belong.   One of the other people that popped out of the musicians pocket (I later learned his name is Tiddles the Partizan ) started asking for Markus, whoever that is. As the man (I learned his name was Naro Velis ) was asking for Markus, and the angry woman was yelling at us (yes it was us, she was mad at me too I've learned), a tree became a person and also started talking to the angry woman.   The other person that came out of Tiddles's pocket (I learned her name was Opal) seems to know Tiddles, and the tree-man. She begins questioning the situation, but leaves me more confused. Am I supposed to know these people too?   At this point, I've been overwhelmed. I decided to just enjoy the show, and watch whatever Tiddles was doing. The man was very entertaining! He played a constant well timed beat, and even danced around a bit. It didnt seem to phase the angry woman though, who yelled for more guards and ballista. I'm going to swap to point form here because things got a bit crazy.   The angry woman seems to have convinced half the people to leave   Tiddles moved away from the group doing some interesting movements   The angry woman got even angrier that we hadnt left yet (it seems like the area behind the walls is very exclusive) and yelled "BALLISTA"   two giant bolts streaked down from the walls, one just barely missing Opal   Tiddles got his shield tangled in his feet, and fell right infront of the bolt   ouch   that looks like it hurt   like damn   that probably wouldve killed me   wait I'm dead already i forgot     So we left that area. Opal, the witch that is friendly with the tree-man and Tiddles, gave me a piece of charcoal. I was able to record again! At this moment we've walked for a few hours in this place. It's dark, and strange, but the people I am with are more strange.   Opal:   Friendly, gave me charcoal, seems to know whats going on.     Tiddles:   Very entertaining, good at catching ballista bolts. Something about the way he plays music really gets me going.     tree-man:   Slow. It took him 5 minutes to respond to me asking who he is. Learned his name is Rusticus     Naro:   2 armed-- 4 armed----- no, he's 6 armed? Seems to be two people? I have never seen anyone like him. However in my studies I know of monsters in that shape... I should ask him more.       At this point, I've caught up to the present. I'm going to put my notebook and borrowed charcoal away. I've decided to stick with this weird group, and the weird group has a map of the area! Its some sort of tower I've learned, and we're on the first floor. We're off to some crazy person. I will report back! 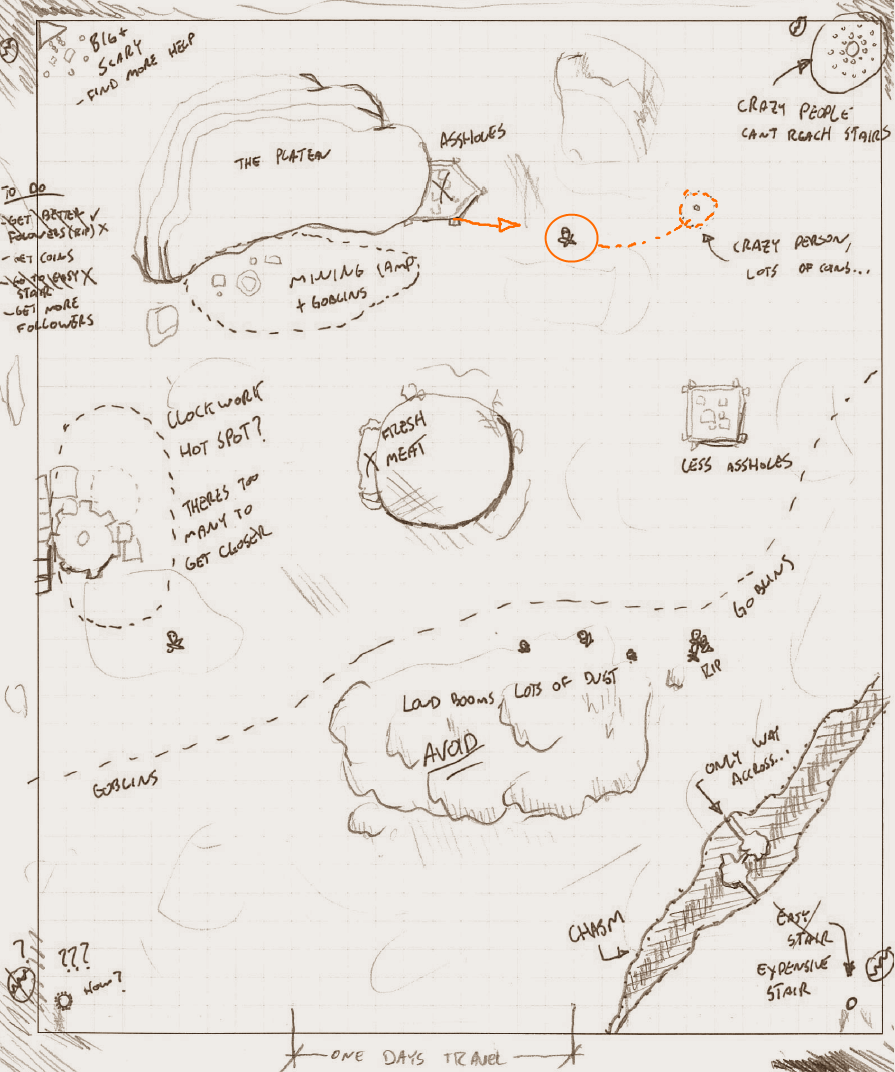 by Stormbril
Ryder out.   . . . . .   We found a pack! It's a really nice looking bag actually. Even withstands acid! It was sitting inside some gross green liquid pool. The leather on it wasn't acid seared at all. There was some stuff inside the bag too, some Silver Circlet and some empty vials, but the bag was where it's at.   I've learned another thing. There are MECHANICAL MEN HERE. ACTUAL WALKING TALKING MECHANICAL MEN. They don't seem friendly though. In fact, they attacked us. Head nods appear to enhance attacks here. Naro is very strong! as is Tiddles! The clockwork however, they appear weak, as they crumbled into gears and metal after just a few hits. Treeman--- I really need to start calling him Rusticus-- collected bits of it. Is that important? I must record more of his actions.   Opal brought the map out again, and pointed to where we were on the map. It's about another 4 hours journey to get to this supposed crazy person. It sounds like a cult person, so I am excited to meet him! This was a brief passage, but I will report more again after meeting this crazy person.   Ryder out.   . . . . . . . .   Okay, that was weird. Quick point form to get my thought process down:   The crazy person was not a cultist   he was an Ifrit   taverns being built by music are really cool   the Ifrit (his name was Daraj) wanted to die? he's already dead though, so this confused me   Rusticus volunteered to fight Daraj (Daraj can only die in honerable combat)   Some unsavories wanted us to throw the match to kill Rusticus and force Daraj to flee   I read back into my notes! some of my memory is coming back   Kir! it is good to see Kir again   the unsavory folks are dead   Daraj is dead 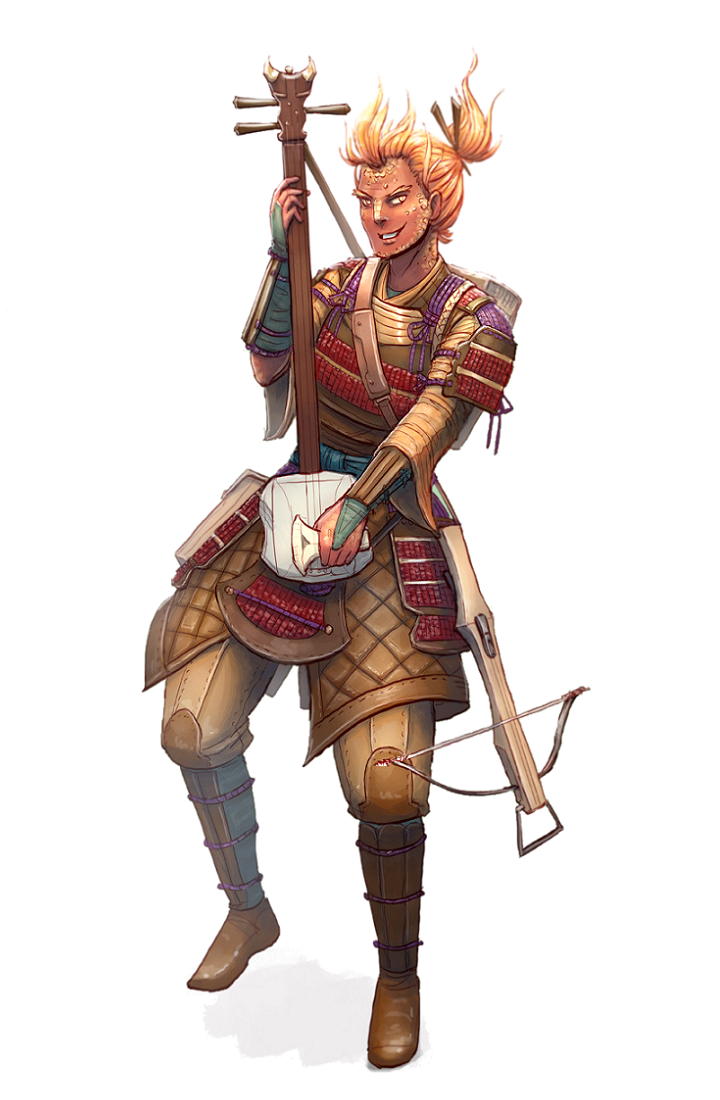 by Brandon Chang
So, Daraj the ifrit wanted an honorable death. This excited and scared Naro, who immediately began fighting his arms (I swear I recognize that! I should ask Kir). It also excited Rusticus, who volunteered (does being a treeman remove his fear of death?). Daraj informed the rest of us that trying to cheat during this battle will result in death for all nearby, and he told us to leave the tavern (note, at this time, there was no tavern)   The most interesting music started playing, and then over the course of 10 minutes, a tavern was built!   What happened next, I have no first hand knowledge. I've interviewed Rusticus, and this is his take on what happened inside the tavern

HA! I killed the hell out of him! Tanked every hit, and took his life honorably. He stood no chance. My vitality is endless! He was absolutely no match for ol grivs wrath here. Ha ha. Ha. Yes, it was a good battle. Say, Tiddles, may I have that red drink? -Rusticus

I think Daraj put up more of a fight than Rusticus lets on, as I see some serious dents in the shapes of FISTS in Rusticus's armor. How does that even happen?   We filled Rusticus in on what happened while he was exchanging blows with Daraj:   As soon as the tavern was built, this man named Georgie approached us, and proposed a business partnership. We trick Daraj into fleeing and killing Rusticus, then we split Rusticus's loot between all parties. This angered Tiddles and Opal greatly. The idea of that kind of backhanded dealings bothered my sense of worth. Even Naro (or is it Markus now? he keeps saying Markus) seemed uninterested.   Georgie called two more friends over to try to convince us, but it was no good. Suddenly we found ourselves fighting again! Georgie had some plans already, and immediately acted upon them. He sent one friend around the tavern (that friends is a coward, I've learned), and then drank something and disappeared.   as an aside: wow these people are strong, they remind me of Kir. I think I'll stay with them a while.   Tiddles and NaroMarkus absolutely destroyed one of Georgie's men. A combo of explosive sound and a 6 armed punch weakened his bones and crushed his skull. It was honestly grotesque. The body disappeared? This is something I need to look into. All the was left was some coin, which I later learned are called "Soul Coins ". It angered Georgie from what I can tell, who suddenly appeared and struck Naro in the back!   Opal (really, thank you for the charcoal) fired a lightning bolt into Georgie! I have some experience with magic, but that was something else. I think that put Georgie on his last legs, as Naro brought his fists down again on Georgie, killing the evil man.   At this point, the sound coming from inside the tavern became quiet again. I briefly flipped through my notebook looking for info about Kir.   Georgies friend, his other friend, not the dead one, took this moment to appear behind us! and MORE MECHANICAL MEN. Somehow they were mostly following his actions. Are they like Kir? I had just re-learned how to call Kir, so I thrust my arms out to either side, and stared upward in praise, calling my friend to me! Kir immediately set off towards Georgies friend + the other mechanical men, and swung his sword! Classic Kir, strong and silent type. It's good to see Kir again.   Opal pointed towards the direction Kir was going, and began cackling. It raised the hair on the back of my neck. Reminds me of cults to be honest.

At this point, Rusticus came out of the tavern. The man was huge! He had to break the door frame to get out. He immediately walked towards Tiddles. I've left space in my notebook to record an interview with him, I simply must know what happened inside. He looks like he's in pain. It must have been tough.   I think Kir scared Georgies friend. Or maybe they just noticed that Georgie and the other was dead? Either way, he dropped to his knees and started pleading for his life. It's a good thing he did, as Kir wouldve killed him. Tiddles stripped the bandit down and took all his gear. The bandit took one last look and ran away, taking one MECHANICAL MAN with him. The other stayed for some reason. Seems he doesnt work like a perfect team like Kir and I do. Kir smashed the other mechanical man into the ground. It's good to have Kir back.   At this point, everything of note has been recorded in detail. I am tired from these experiences. I think I will stay with these people, they seem friendly, strong, and safe.