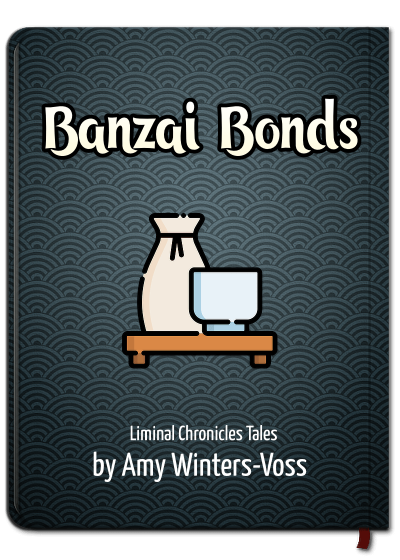 (The audio link is a preview. To listen to the full story, click on the '...' and open it in Spotify.)

I barely refrained from slamming the store’s phone down--one of two in town. It was bad enough that a landslide forced me to find another house on short notice. Now, my belongings wouldn’t arrive for several more weeks. Was my move to Nonogawa cursed?

With nothing better to do, I strolled, skirting the edges of the farming village. My heart sank. Some might call the area quaint. But the farmhouses and fields looked like time stood still. Growing up in Kyoto had spoiled me, with its every convenience and high society. How was I supposed to manage a fifty-year assignment in this Podunk?

I’d expected something a little more upscale when they asked me to be the head doctor at the new clinic and take the undercover post for the League of Guardians.

Aya, you signed up because Soujou-bou, King of the Tengu, picked you to serve here. How long would reminding myself of that ‘honor’ keep me motivated? A few days, at this rate.

My walk brought me to the main street, a little more than a dirt road. It took less than ten minutes to traverse. Each store displayed a brightly colored noren curtain with the shop name and a few characters denoting items sold. I stopped in front of a tile-roofed bar called Banzai, the word people shouted in drinking games.

Someone had a sense of humor. Ducking under the noren, I peeked in. A fellow tanuki, also in human disguise, greeted me with gusto and talked me into staying for lunch. He introduced himself as Noda. All eyes turned to me. I was the only one wearing a suit.

The set meal of grilled meat and rice, pickled cucumbers, miso soup, and sweet egg omelet melted in my mouth. A pang formed in my chest as I savored each bite. It tasted like home. Perhaps the food was a harbinger of civilization?

“At least your well stocked local bar and delicious food will mitigate the shock of moving to the middle of nowhere,” I said between bites.

“So, what’s the most popular activity here in Nonogawa?”

Did these yokels even know how to hunt properly?

He must have read my skepticism as he poured sake. “Enjoying the meat?”

“It’s wild boar. Parch your thirst and your curiosity, Aya-san. Join us. The hunts I organize are the most successful. Boar and deer are plentiful. They’ve become a problem for the agricultural community, destroying the crops and scattering the livestock. We do the farmers a favor. It makes for better harvests, which brings prosperity to our little town.”

I was ignorant about farming. But I knew how destructive and dangerous a wild boar, let alone a herd of them, could be.

As I sipped my tea, he continued. “Folks don’t like being judged. Just because you’re a fancy-pants doctor doesn’t mean you’re better than we are. I’d bet our regional cuisine will be the key to you accepting us, and us you, in return. Wild boar is excellent, as you can see. People travel from all over to our festival for a taste of how we prepare it.”

I kicked myself for my snobbery. Noda wasn’t educated, but he had wisdom I lacked.

He poured us both several glasses of top-notch sake as he told me of his favorite hunts. Though by the time I left, we were both tipsy. I’m not sure how reliable a narrator he was. One thing was certain, his stories re-awoke the adventurer in me.

The next day, I visited Noda at his bar again just as it opened. No other customers had arrived yet. “I’ve never hunted, but I miss adventures. Does hiding our magic use make the task difficult?”

Oh, the sparkle of mirth in his eyes. He knew he had me hooked. “It adds to the challenge.”

There wasn’t time to travel to the nearest sizable town for proper gear. So, I was stuck with the suit I was wearing until my belongings arrived. I’d have to be careful not to ruin it. At least the hardware store had the sturdy split-toe work boots Noda recommended.

In the predawn hours, brave souls gathered. Flushers and kishu ken hound handlers formed one group, gun owners another. I shied away from the over-curious dogs. I could take them out if need be, but it wouldn’t gain me friends and it would wreck my suit.

The flushers teased me about not wanting to get my fancy duds dirty. My companions wore simple trousers and flannel shirts. I stuck out again. Unperturbed by the hounds, Noda drew the attention away from me and compared our hunt to samurai of old protecting crops from roaming boar herds.

With sunrise came the gratifying crunch of leaves under our boots, the stout kishu kens braying as they scented the prey, and our first peek at a truly magnificent boar. Fog puffs swirled past his tusks as the creature spied us.

Oh, I wanted to return to my tanuki form for the chase. But it wouldn’t foster the friendships I needed here in Nonogawa. Humans didn’t trust us yokai. We hid among them because of our declining numbers.

One hunter raised his rifle and took a shot. But the creature, astute enough to sense danger, dashed behind a boulder. If it had been Noda, he would have used a bit of discreet magic to ensure a hit.

My heart pounded as we loosed the hounds and bolted after them. The unity and liaison of the hunting party was perfect. Spotting the boar, I almost leaped for joy as I pointed and Noda aimed.

But another gunshot erupted just before he squeezed the trigger. The lack of a break and turn for my fellow tanuki irked me. I said so, under my breath.

Noda simply shrugged. “There’ll be more quarry. What’s important is helping those who can’t afford meat, like these fellows with us, and protecting the crops. Everyone helps to haul out the carcasses and split the bounty. Later, I’ll show you how to cook it to perfection.”

Near the end of the day, we descended the mountains. I pointed out a boar trampling and rooting up a sweet potato field the farmer hadn’t harvested yet. All that hard work and food gone to waste turned my stomach.

With a minute touch of magic, Noda aimed. Crack! The beast fell. We hollered that Noda had a hit before rushing toward the beast. My new friend’s ear to ear grin was the only confirmation I needed. We saved the farmer’s livelihood, and it made me stand a little taller. I clapped my companion on the back and said, “Well, expert sniper, will you teach me how to shoot?”

A wicked gleam entered his eyes. “Only if you clean the kill.”

That day we bagged three boars. I kneeled to clean the first boar and winked at the flushers who had teased me earlier. “See, I’ll even do the dirtiest job today.” The gesture earned me a series of grateful nods. It took all of us to haul the heavy beasts back to the trucks.

Noda promised the group he’d fry some of the meat with his secret recipe for the festival. A great venue for people to try the wild boar. He asked if I wanted to help. If I was going to live in this small town, I’d need to be a part of each aspect, not sulk about missing Kyoto. So, I heartily agreed.

After that, I went on every hunting trip. My new friends taught me to fly fish and talked me into joining the planning committee for the rowdy fighting float festival. Those bonds saved my career.

People had warned me a small town can be hard to break into. But when I embraced the place and its customs, folks slowly accepted me in return.

To thank Noda for helping me find a common thread with the community, I invited him for dinner and served several arcane recipes from my great, great grandmother. We drank late into the night.

He taught me that traditions and pitching in with your whole heart bind a community together. Now, I consider him a brother.

Login & give some love! Tweet
This flash fiction was written as part of the vssCollab (<-link) challenge and is part of the Liminal Chronicles universe.