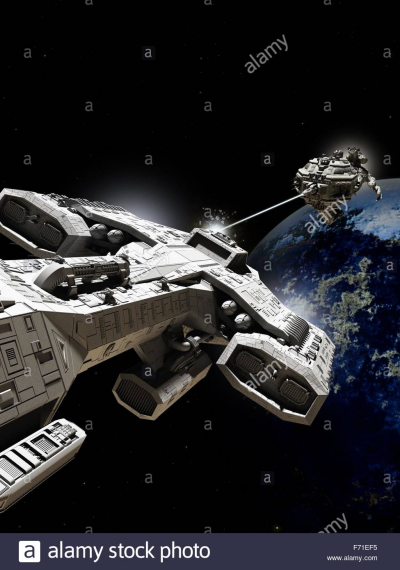 In the world of Commonwealth Planets

The Xiphos was one of the new Aspis class frigates. It was armed with a 100m spinal mount railgun the first frigate class to carry spinal weaponry, it had 7 dual 9inch rail turrets, 2 forward torpedo tubes, 6 VLS missile silos, the new bait and trap point defense system and 2 experimental plasma turrets. At 250 meters long it was heavily armed and very fast. It would have stood out in the convoy of Caribou and Stein class freighters and probably would have detered any would be attackers. However the Xiphos no longer looked like a warship after 4 months in drydock at Radeyah shipyards it looked just like a caribou freighter, at least on the surface. Fleet inteligence had been tracking the increasing attacks on convoys throughout the sector and had been unable to gain any solid leads on who was behind it, so they decided to send a high value convoy of military weapons and shield projectors through the sector with a light escort. Thats why the Xiphos was refited, she was going to pose as one of the convoys freighters and then ambush whoever was attacking Commonwealth shipping. Commander Brett Tracer had only been promoted 6 months ago and this was his first command of a vessel on anything more than system patrols and routine escorts, not only that but he was commanding the fleets newest class of frigate with experimental wepon systems on a critical mission. He was quietly hoping that the convoy would reach it destination with no problems and that someone else would then be assigned the mission, sadly his gut was telling him that he was in for a rough time. Tracer was sitting at his desk reading over his orders again.

You are to take command of the heavy frigate Xiphos currently at the Radeyah shipyards. On 26/03/02 at 0400hrs you will join convoy 683 as they move from Radeyah shipyards to Herodotus fleetyards in the Corpus sector. Fleet intel has let slip that convoy 683 is carrying several of our newest shield generators as well as 4 prototype plasma cannons. We expect that the convoy will be attacked in the Ascalaphos system intel predicts nothing larger than corvette sized hostiles. You are to maintain radio silence until you are under attack not even the convoys escorts know you will be there.

Your objectives are simple.

He didnt like this, Vice admiral Bishop had personally handed him the orders and given him more verbally, it all pointed to one thing there was a conflict brewing but against who no one knew. There was a quiet hiss as his office door slid open and his XO Dillon Carter walked in, it was the one thing he was glad about in this whole mess his xo was brilliant. A career Navy officer he had turned down 4 offers of promotion so that he could remain as an XO, he was tough as nails and pushed the crew hard but he was fair and well liked by the crew. "So Carter hows the crews mood? Do they enjoy being glorified truck drivers?" Tracer said as he sat back in his chair throwing the orders on the desk. "The crew are doing fine, although they are getting a little bored." Carter replied as he walked over to the desk, "The convoy is approaching the bridge zone to the Ingunn system." he picked up the orders reading them. Tracer noded slowly with a slight frown, "Ingunn is where 5 of the 13 convoys were lost over the last 6 months"  he looked up at his XO, "It will happen after we leave the bridge zone in Ingunn. How long until we jump?". Carter dropped the orders back on the desk, "1 Hour to jump, another 2 in subspace and then 7 hours untill we can engage our transit drives." "So within the next 12 hours we will find out if it was worth disguising the Xiphos as a freighter." Tracer said as he got up. "I want the crew to tripple check all systems, make sure the charges are ready to blow the outer shell, then to bunks the 2nd watch can run things for the next 6 hours, I want everyone rested and ready for combat." Carter snapped to attention and replied with a sharp "Yes Sir." a small grin on his face.

The crew of the Xiphos were efficient, over the next 2 hours diagnostics and systems checks were run and re-run, the ship was at full combat readiness. As the 2nd watch came on duty the rest of the crew hit their bunks to catch as much sleep as they could, the orders had come down and they were to expect combat soon. 6 Hours after giving the order Tracer walked into the bridge, Carter was already there standing at the command display. As tracer walked over he engaged his neural link bringing up ship status and tactical displays. "No signs that anything is amiss sir" said Carter, he pointed to the display as the tactical enlarged showing the positions of the convoy and its escorts. The display showed a Saber class gunship 500km ahead of the lead freighter, the first four freighters were in diamond formation with the two Nestor class corvettes  100km to the flanks, the second diamond of freighters had the Xiphos on the port side and the second Saber was 50km to the rear. "the escorts havent picked up anything on long range scans yet" he continued, "and with only passive sensors we cant even see as far as they can." the display changed showing a holo of the Ingunn system. Tracer looked over it then asked "how well has this system been mapped? There are 5 subspace bridges but all are connected to commonwealth or EU systems, and none of the nav bouys have logged unknown vessels." Carters face was serious his voice grave "It should be fully mapped, so either there is another bridge we dont know about or," his face grew harder "or someone has figured out how to bypass the bouys sensors.". Tracer understood his XO's concern it wasnt difficult to have a ship run silent past nav bouys but it was impossible to hide the massive tear between real space and subspace when a ships bridging drive fired up.

The bridge was fairly quiet for the next 2 hours, nothing changed on the tactical apart from an extended sensor range, the sensors officer managed to piggyback the corvettes active sensors giving another 20,000km range. Tracer was begining to hope that there would be no hostile contacts when he heard a concerned "sir", as he looked back to his display he saw that his sensors officer had flagged an anommoly 35,000km out. It was small and either the escorts hadnt seen it or they discounted it, it was a small area barley noticable but it was moving and was giving a small gravity reading. Tracer would have assumed it was just a small rouge asteroid except it was on a perfect intercept course with the convoy. "How long until we can get better scans?" he asked, "With our own sensors i could give you detailed scans now." the officer replied, "But with us relying on the corvettes scanners I would say another 15 minutes". Tracer looked at his displays intercept would be in 30 minutes  but if his suspicions were correct the moment the anomally came within 20,000km they would power up and set all the sensors in the convoy screaming, he had to admit it was a brilliant tactic. "They must have had a ship in the bridge zone ready to transmit our course and speed" Carter said, Tracer noded "Bring the crew up to first degree readiness, keep our systems on low but I want them ready to be brought to full status within 5 minutes." Tracer handed a data stick to Carter, "Give this to the comms officer i want him to transmit it to the escort leader via tight beam laser while we fake an engine failure." Carter nodded and walked off. Tracer brought the tactical back up showing the convoy, the anomally and the point that the convoy could engage its transit drives, it didnt look good, the best he could see was that the Xiphos would have to hold the raiders for at least an hour so that the convoy could get clear. After that he would be free to fully engage the enemy and hopefully take a ship reasonably intact. Carter came back "Comms are ready to transmit the data and seem to be looking forward to the little act they will be putting on" he was smiling, "Engineering also reports they are ready to bring the starboard number 2 engine down to 5% power and the charges on the freighter engine nozzel are ready to blow". "Good, we fall behing the convoy as they pull away hopefully drawing attention to us, then when they close in we blow the shell and engage them" Tracer said.

The "was" in the beginning - is this a bad omen for the ship ? Also off to a good start!

not a bad omen well not yet anyway haha more going along the lines of it begining a new subclass of ship with slightly different layout to the original types. and thanks for the feedback im extremely nervous about actually writing a story instead of just making it in my head while im working.

It look sreally good and I wish you the best of luck :) I will be around reading :)