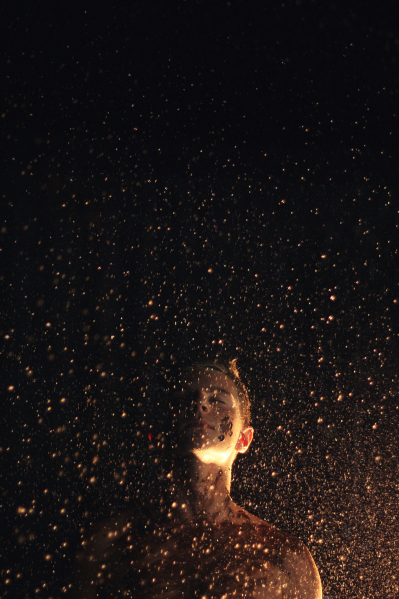 1. Wendy Grows Up 2. Peter Comes Through 3. The Sea Wakes Up 4. Flight Over the Ocean 5. The First Ambush
Neverland
Ongoing 1160 Words

James' eyes fluttered opened, awakened by a slow lurch as the ship released a loud groan. She pushed herself up onto her forearms and peered around the dim cabin. Mr. Smee had left the oil lamp in the corner on dimly, but it was outshined by the sunlight drifting into the porthole. It warmed the room and gave James the courage to push her covers off and sit up.

She pulled on the red silk robe draped over the foot of her bed and walked over to the wooden desk that sat in the middle of the cabin. She sat down behind it and pulled open the drawer there to reveal a fine collection of silver-looking hooks.

As she perused them, deciding which to wear today, she thought as she often did of how she lost her right hand. She knew that awful boy Peter had cut it off and fed it to a monstrously large crocodile. She knew that, but she didn't quite ever remember it. It felt more as if someone had told the story sto her instead of it being a memory that she herself had.

Captain James Hook sighed and picked up her favorite for day to day activities. It was a simple hook made of steel that she comissioned from the pixies only a few weeks after the incident--her first hook. As she put it on the boat shifted a second time. The ice was melting.

Someone rapped on the door.

"Enter," James said as she finished screwing her hook into the base attached to her stump.

The door cracked and Mr. Smee peered in, his round, red nose appearing first, followed by his bushy white bard and bespetacled blue eyes. "Cap'n, sea is meltin'. Shall I get the crew ready?"

James smiled a little bit. "Of course. Steer the ship away from Cannibal Cove as soon as the sea is ready." Peter was young, and that made him predictable. He always arrived back in Neverland in the same place. This time she and her crew would be ready.

Mr. Smee nodded. "Aye, Cap'n." He retreated and shut the door behind him.

James looked at the beam of sunlight streaming in through the porthole. This time would be different. She felt it in every fiber of her being in a way she couldn't explain. The crew would call her superstitious if she said it, but she knew that they would be able to catch the boy off guard this time. She stood and dressed herself, choosing a long, red trenchcoat and matching tricorne for the occasion. The hat had a single, long white feather that had fallen from the Neverbird onto her ship one afternoon.

When had that been? The captain frowned as she adjusted the hat.

Satisfied, she walked on to the deck, squinting at first. The morning sunlight reflected on the ice covering the ocean, making the day seem impossibly bright. The crew immediately picked up the pace when she arrived, though there was still no rush. The ice melted unusally fast whenever Peter returned but they would still have to wait a few hours to sail.

Skylights, the quartermaster, stood on deck with their hands behind their back, peering over the slabs of ice toward the island. It jutted up tall, the mountain peak clearly visible on this bright morning. A small breeze picked up the tail of Skylights's blue coat for a moment.

"Good morning, Captain," Skylights nodded toward her. "Nearly everything is in place to set sail. Now we wait."

"Excellent, and may I say you look quite fine this morning."

Skylights smirked. "As do you, my captain. It's been a while since you've worn that coat. I take it you have high hopes for this occasion."

James nodded. "I do. Listen, this is a strange question, but it's been bothering me since I put it on--do you remember when it was I found the Neverbird feather for this hat?"

Skylights looked upward thoughtfully, and sadness crossed their face. "It was the day that Maime left Neverland."

"Yes..." James said slowly, wondering if it would appear unstable for her to ask the next question. "But, do you remember when that was?"

"Captain, it was right after I came aboard this ship."

"I know that, but how long ago was that?"

This gave Skylights pause as well. "It would have been..." they trailed off.

"I hate this god-forsaken island," James spat. "There's no way to leave. Time doesn't work the way it's supposed to. That curse boy is the only one who ever seems a step ahead of anything. Yesterday I found a bit of fairie food some pixie tried to sneak into my dinner." She clenched her fist. "Today this ends."

They were quiet for a few moments. A large crack sounded and the shipped lurched and rocked, finally completely free from the ice. James had to put her arms out to catch her balance, but soon she and Skylights and the crew all steadied themself to the dance of the ship.

"Captain," Skylights said in a hushed voice, leaning in. "I don't know if the rest of the crew believes there is anything else out there for them."

"We'll just have to prove them otherwise," James replied. Skylights looked lost in thought. James could guess where those thoughts were, but prodded anyway. "Are you doubting that another world could be real?"

Skylights closed their eyes. "Of course I am, Jas. Everything that proves otherwise just feels like a dream. Nothing ever feels real."

James nodded once. "I know. We both know time doesn't feel real and memories fade so fast. But we also know that Peter has to go somewhere and...and your mother...Maime..." She was afraid to bring it up, knowing that if the grief wasn't already there for Skylights it would come.

"It doesn't feel like she was real anymore. It...it feels like somebody placed those memories in my head for me. I know that sounds crazy."

Small waves lapped against the boat, just barely. The ocean around them was still a solid sheet of ice, with only the boat free. The sun felt so good after the last three days of bitter cold.

Skylights smiled a little, but James could tell that they didn't believe her, they only appreciated that James believed. "I hope you're right."