Null Force: Battle in the Halls of Darkness 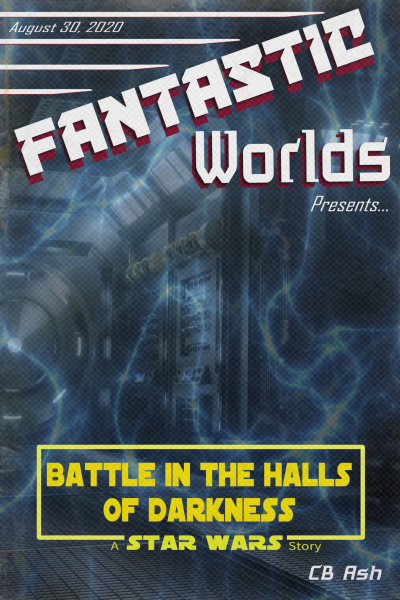 In the world of Star Wars: Shards

“All right,” Ruk said. “First, we warn the others. Then we deal with this… thing.”

He looked back and forth toward either end of the chamber.

“This platform runs the length of the building. Pala, is there anywhere we could boost our comms signal from here? Maybe find the edge of the jamming field?”

She turned to look in either direction, then pointed past Ruk towards what looked like another maintenance door 180 meters away.

“There. That should be the door to a communication console and station. I can boost a signal from there.”

Ruk did a double take at her.

“There? A communication station attached directly to all this? You’re kidding.”

“Not at all. It’s a backup station for emergencies.”

Ruk took off toward the door with Pala close beside him.

Racing along the platform, Ruk chanced a quick look at the sensor display in his helmet. The hyperspace rift hadn’t moved, only grown a few centimeters larger. Debris from the shattered chassis of the former hyperspace drive itself had started to move. Resisting the pull of the planet’s gravity, the blackened, twisted pieces of metal floated into the air around the rift.

They followed an invisible path, caught up in the altered physics around the hyperspace ‘tear’. Slowly, the pieces orbited the chaotic energies, like waterlogged trash slowly circling a drain. Ruk shook his head and fixed his eyes ahead of them.

“How does it even have power right now?” He asked.

Pala, running almost beside him, was quiet save for a light hum which meant she was thinking. After a few seconds, she replied.

“Maybe an isolated reactor or engine, like from a speeder bike. It must be. Something portable, but with enough power to simulate the quick power surge for a hyperdrive jump.”

“But it’s something we can shut down or turn off.”

“Provided we can reach it. It will be out there under the device or what’s left of it.”

“Lovely.” He shook his head. “I just don’t have inventive enough swear words for how big a cluster this is.”

She chuckled, but Ruk didn’t hear any actual humor.

“A lab like this should have maintenance drones. They’re supposed to. I can use two of those to get close and shut down the power. But it will slag the drones.”

Past the door, the emergency station was literally a console in a recessed area of a corridor leading away from the test chamber. The station’s console was online, creating an island of blue light in the hallway. Pala tapped a few keys, shook her head, then pulled open a repair panel to the right of the device.

She pulled out a bundle of optical wires, then selected four marked with a blue band.

“The console? No. It’s stuck trying to cycle its system’s online. But we need the connection, not the console.”

Using a multi-tool from her belt, Pala connected her gauntlet’s data ports to the lab’s communication system.

“Ruk? I’ve patched the system into our private comm channel. The system’s unstable from all the abuse it’s taken. It won’t hold for longer than a short burst before the relays at the top of the building burn out.”

Ruk flipped the cover open on his sensor glove and started typing on the small keyboard.

“What…?” Pala asked, but Ruk shook his head.

“Text. Unstable or not, text strains the system less.”

Quickly typing the message, he hit ‘send’. The system immediately replied that the message was delivered.

Pala let out a sigh.

“System hasn’t degraded. We should be able to wait for a reply.”

Then a shadow crossed the sensor display in Ruk’s helmet.

“Pala? Any way to make that portable?”

She turned and leaned in toward the forest of cables.

He snapped the words out, not quite like an order. Pala reacted instantly. There was no way he could see through her helmet’s visor; it was tinted like his. But the way her helmeted head pivoted in his direction suggested either a scowl or a frown of curiosity. She focused on the forest of optical cables.

“Two minutes.” After a brief pause she added, “is it a cronau energy wave? With the rift still open, which I still can’t grasp, there should be regular wave bursts.”

Ruk squinted down the hallway into the darkness. Sensors should have given him a clear picture or reading of whatever it was. It bothered him it didn’t. He stepped out of the alcove and into the hallway. On instinct, his hand dropped to his waist until he remembered that he came on this mission unarmed.

“I told you, they will be here. They should have the rest of the designs we lack.”

The sound of the voice made him go stone stiff. Ruk didn’t recognize the voice other than it was slightly higher in octave than his and wasn’t Eman or Pala. A human woman’s voice? He wasn’t sure.

What grabbed him was the chill under the words. That made him feel like a bug about to be dissected. It bothered him more that his armor and helmet’s sensors just would not give him a clear image. Ruk eased closer. Suddenly, his helmet cut through the stray cronau interference.

“Ones to replace the corrupted files from the server?”

It was Eman and Rhia. They were walking in his direction.

A corridor was an ugly place for a fight, no matter how action-packed the holovids made it look. In a fight like that, no one came away without needing major medical help. Ruk slowly retraced his steps, staying close to the shadows and moving slow so he could eavesdrop.

Neither one looked happy. However, the doctor’s body language suggested contained rage. The Bothan shook his head.

“I’m disappointed. I thought a fully trained Tleilaxu Mentat armed with their order’s astounding mental computing powers would have planned for even this problem. My associates won’t take this well.”

Rhia shot a look at the doctor hot enough to melt steel.

“No one can plan enough for a corporate bureaucracy. So threaten all you want. I’m not impressed. Also, without me, you won’t be able to reverse the hyperdrive prototype into those ‘hyperspace rift torpedoes’ you want so badly.”

The words stunned Ruk bad enough he missed a step. Catching himself before he fell, he brushed the wall. The resulting clack of armor against building echoed far too loud for Ruk’s comfort in the hallway. He froze.

“What was that?” Eman demanded.

Over his sensors, Ruk could tell Rhia had turned to face him, despite the shadows. He let out a low, ragged sigh.

Ruk bolted back down the hallway chased by blaster fire.

Pala was standing upright, stretching her lower back when Ruk reached her. Startled, she spun toward him, hands up to defend herself. There was a metal box strapped to her left forearm that was wired into her armor’s gauntlet. Ruk pointed at it.

Pala tilted her head a fraction to the right. Ruk knew that was a sure sign she was frowning at him.

Blaster shots burned the surrounding air. They both flinched.

Racing out the doorway, Pala turned to its keypad. The door slammed shut a second later.

Ruk waved her to the right side of the doorframe while he stood on the other. Pala nodded and complied.

“Ambush when they walk out?” she whispered over the comlink.

“Roger that,” Ruk replied. “We need to get that blaster away from them. Without it, we’ve got the advantage.”

A blood red lightsaber blade speared through the middle of the durasteel door.