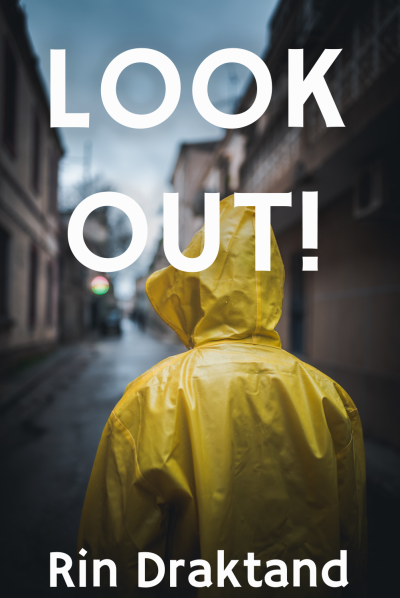 In the world of Artificial Paradise

Tiny droplets landed on the hood and slid down the yellow fabric. The young woman pulled the raincoat's hood further down her face and closed the door behind her. The rain had picked up again while he waited for her to come back out.

He licked his dry lips. Just his nerves. In the darkness, he couldn't see her face, but it couldn't be anyone else but her. He had watched her fetch the keys in the letterbox. It wasn’t her house. She was most likely there to water the plants of a friend that was out of town. She walked down the stairs of the porch with her hands in the pockets of her raincoat. She daintily stepped onto the sidewalk and hurried on her way through the rain.

If she had looked around, she would've spotted him where he stood leaning against the wall. But she didn’t. He had a good feeling about today. He gripped his phone tighter in his hand, gently touched the object in his pocket, and slowly followed her. Patience. She had to be heading home now.

Or maybe not. When she didn't turn down the road to her apartment, he felt perplexed. He raised his pace and hurried after her.  She stepped into an area packed with 'Do not enter' signs. No woman would be heading into an abandoned building if she thought that she was being followed. Maybe she knew that it was him?

Her steps echoed as she entered an empty car park. She moved deeper into the building, up the ramp, past the pillars holding up the roof. Empty. Abandoned. Together. Her shadow flickered over the wall as she moved. She stopped at the far wall and stood still, gazing forward out over the city. It was time.

His own steps echoed in the empty building, but she didn't react. Her headphones must be on. He had seen them earlier in the day. With a smile, he stepped over to her.  He placed his hand on her shoulder and pulled the object out of his pocket. "Excuse me miss, I know you don-"

She turned around. It wasn't her face. It was the face of a young man, pretty, but still a man's.  Shocked, the older man opened his mouth to apologize, but a feeling almost like electricity moved through his body. He wanted to fight, to shout, to cry, but he did none of that. Instead, he gripped at his chest, shocked at how warm it suddenly felt. His hands had turned red. How curious.

The older man’s eyes turned from his blood-covered hands back toward the youth. A murderer. Someone who had calmly kept a focused gaze on him as he had fallen to his knees. Pure confusion played across the older man's face while a muffled gurgling sound passed by his dry lips. He couldn't shout. He turned. He had to get away. But there was a long way back to the ramp and things don’t look like they did a minute ago. Had that tipped over trash can been there all along?

The old man had this scuffed-up look to him. Not like he was homeless or anything, more like the look of someone who couldn’t be bothered with that kind of thing. Someone who kept postponing his haircut to later.

The youth looked away from the man on the floor who was slowly and unsuccessfully crawling away from him. He wiped his weapon of choice on the sweater inside the raincoat and put the knife back in his pocket. No need to overdo it, this turned out fine anyway. As he was about to rise from his crunched over position, a photograph on the ground next to him drew his attention. He recognized the girl and the man in the photograph. He knew her. It was, after all, her yellow raincoat. She looked a bit like the old man he supposed. Same nose. Same terrified eyes. Her screams had been like music to his ears.

Tiny droplets dripped from his yellow raincoat and landed on the ground. He’d sleep like a baby tonight.

Oooh that was a fun ride!

That was really well done BD! Thank you for sharing <3