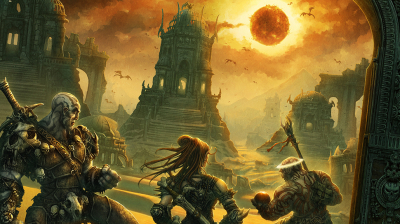 Chapter I: History of Inua Chapter II: Theory of Magic

In the world of Palanthira

Chapter I: History of Inua

It is year of 844 HE, I've met the Wandering Mages. We've spent weeks in my laboratory, trying to understand their issue. They were constantly talking about some great power called Inua, they've discovered. They believe it is something else - something we call Weave, they call it Inua, but they understand it differently. Our studies and facts we know about Weave tell us, that Weave is "fabric". This allow magic users to tap into its potential and claim it - rewriting this fabric in many different ways. We know them as schools. However, Wandering Mages claims that Weave it different thing then we think. They believe Weave was created as an temporally solution for mortals how to use magic to modify their lifes and words, to satisfy their need for power and ability to change things.

They believe that Weave is not even that old, they claim it was given to mortals slightly after the Disappearance of First People. This is absolute breakthrough if their thoughts are correct. It would explain all those anomalies we are finding in those ancient temples and crypts. Why our magic is completely useless against its defenses. It would explain how they were able to build such powerful artifacts and modify magic to its will beyond our imagination.

They believe that the thing we thing Weave is, it is called Inua in their language. It is natural power, as natural as life and death, growing and withering. They claim this power was suppresed on our continent for unknown reasons. Other continents, for example Penthyr, was completely untouched by this our "Weave", instead they were always using Inua. This allows them to dive way deeper into magical knowledge, understanding and powers.

Wandering Mages described me their magical uses. They were unable to show me anything, because of Inua is missing on our continent - which is also the point why not many Penthyr mages travels out of Penthyr - they can carry some "reserve", but once they go out, they must return to Penthyr to "recharge". They believe this is not limitation of Inua, simply drawback intentionally put on their magic by gods so they are able to keep them on their island.

They described how cities are build, forest can be regrown in few days, animals can be created. Travel around the world without larger issues, even to unknown places. Travel in their memories as it was a theater, not forgetting single memory. The only thing Inua can't do and our Weave can, is predict future. Even at the slightest. This is interesting change as I believed Weave is weaker at every point and aspect, but it is quite interesting that Inua can't do it.

They've also described not many elfs know about the true power of Inua - as they have never used it. They don't know the limitations as none was ever found. Ships are sunk with finder of young mage, enemies killed without slightest effort. I've asked them about stronger goals, like creating entire continents or sealing away Outsiders. They were quite supprised by my questions and refused to answer. I wonder if they ever attempted such goals and it failed.. or even worse - succeeded and they are simply terified by the powers every single citizen of Penthyr yields.

Wandering Mages were also talking about some of their theories why other continents were given weaker magic then Penthyr. They have three working theories and visited Heraklion to confirm or deny any of these.

Their first theory is about greed. They believe heraklion once had too greedy mages, claiming they can do anything and breaking the boundaries gods liked. Then they have decided to stole this power from mortals and redirect it elsewhere. However, this calls for a questions how can gods achieve this ? There is no god, in their opinion, that has power over Inua. It is force of nature, Inua is veins of gods, so how can they manipulate it in this way ?

Their second theory is natural reasons. They believe Inua works like ocean currents and winds. Sometimes is present and sometimes is not. It has nothing to do with bad users. It simply travelled away and what is a millennium for a nature, so it might take another hundreds of millenniums for Inua to return.

And their third theory, in my opinion the most crazy one, they believe our ancestors drove it away. They simply surrendered Inua. Out of fear or out of envy. Maybe Inua was too much to handle for continent where not everyone is born as spell-caster. It was maybe too much for our rullers so they decided to surrender this powers and throw it into damnation, claming Weave, weaker sibling of Inua, as their new source of magic.