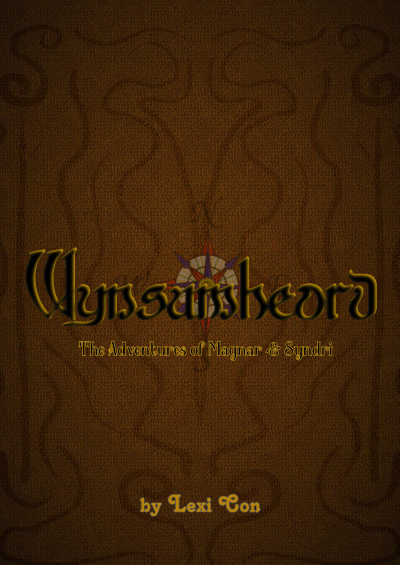 2902 0 0
In Wynsumheord, this story is told,
About a man both strong and bold.
His magnificent muscles were grizzly as a bear’s.
But, where his brawn abounded, his brains were scarce.
From the village of Hangra, he traveled to us...
On the day he arrived, he stirred up quite a fuss.

“Brother!” Magnar shouted as he ran into the room, “You’ll never believe who’s come to town.”

“The Misfits of Taungoun?” I asked with much interest, “It’s been a while since we’ve seen their traveling show.”

Magnar nodded as his smile broadened. My eyebrows furrowed as I tried my hardest to figure out who it was and why Magnar was smiling and chuckling so.

“Have you given up?” he grinned impatiently as I inhaled and parted my lips, “It’s Burkk!” Magnar blurted before I could speak.

“Our cousin Burkk?” I grimaced as I remembered the last time he visited.

And, as he spoke, who chanced to barge through the door? Burkk himself. Magnar was muscular, but Burkk even more so. He was taller and thicker too. He wore a thick coat of fur and a Viking’s helmet wherever he went and whatever the weather (no matter how hard I try, I cannot recall him wearing any other garb). His hair was ruddy, wooly, and unkempt. He never bothered even trying to braid it, let alone comb it. His beard was thick, and his voice was deep.

“Hello, my cousins!” he bellowed, sending wafts of ale our way (for he always drank in the taverns).

Magnar ran over to greet him, but I stood still in my place. Burkk always seemed happy to see us, but I had no fond memories of him. Before I knew it, he was before me, grinning, he laughed and punched me in the stomach jovially (but roughly nevertheless)

“Syndri, my good man!” he growled as I winced, “Stronger than last time I suppose, but you must eat more. You’re too scrawny, lad. You need more meat on those bones.”

I sighed and rolled my eyes as soon as I recovered from the pain. By this time, Burkk and Magnar had found seats in the sitting room and were deep in conversation.

“So, what brings you to Dryhtenhaven, cousin?” Magnar asked him.

“I have not come for fun and games,” Burkk said loudly with his dirty feet up upon our table, “I have chased me an adversary from Hangra.”

“Shan’t we be privy about it?” Magnar murmured, “Perchance he be lying in wait outside for you?”

“There be no fear in my bones,” Burkk laughed, “Come what may, I shall smite the bastard!”

“Whoever might your enemy be?” Magnar asked, “Whence come he and why?”

“Nevermind all those details,” Burkk arose, “With your help, we shall kick this idiot’s--”

A loud crash outside startled us all and interrupted Burkk (quite welcome was the disruption, for Burkk minded not his manners or his language). Burkk ran outside and yelled loudly.

“Shan’t we have a plan first?” I spoke as I followed Magnar outside after him.

“Nonsense!” Burkk screamed, “We shall fight to the death!”

I shook my head. How serious was this, really? I never took Burkk seriously. Suddenly, a mad clad similarly to Burkk leapt out from the brush and tackled him to the ground. They tussled and fought, grunting profanities and insults at each other as they pelted each other with their fists and pulled each other’s clothes.

Magnar and I stood and watched, unsure of what exactly we were looking at. Finally, they pushed away from each other and flung to their feet. Both growling through gritted teeth, they drew their weapons and struck them against each other’s. I would have surmised they both were drunken, for their weapons fell to the ground more than once, and the other waited for the opponent to collect it again before attacking again.

“Halt at once!” Magnar screamed, drawing his sword and standing between them, “What be this matter for which you two fight?”

Both the men stopped and considered for a long while. In that moment, they each seemed to glean their brains to no avail.

″...We fight to fight!” Burkk roared as he lunged at his opponent once again but stumbled and fell to the ground faint with drunkenness.

The other man then rose up against Magnar, but my brother delivered a punch that sent him to the ground lying alongside our cousin. I stared in confusion at all of this.

“They’ll wake after a while,” Magnar smiled, patting me hard over the back and leading me towards the house, “Never spend too much time in the tavern."

This grand misadventure was one of his many.

Had he ever triumphs? I can’t recall any.

By The Shining Lord’s heaven, we never may know.