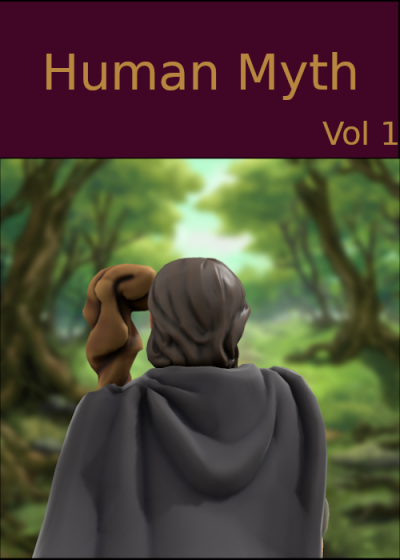 They start to settle down for the night and make camp. Kenta sit down off to the side of the fire. John sits in front of it and removes his mask to rub his face saying “that mask gets hot after a while.” Kenta looks at him with a stare. John looks up at her and says “What?”

Kenta’s eyes go wide and she screams “YOU’RE HUMAN!” as she tries to get back to her feet.

John looks at Nasha and says “Well I guess that proves it.”

John says “Her kind gave me this mask.”

John stands and walks over to her saying “oh and it gets better” he then pulls out the amulet to show it to Kenta saying “This is the reason we can talk to each other.”

Kenta looks at the amulet and then screams “YOU ARE THE TRAVELER!!!” She imminently drops down on her front legs and lowers her head as if to bow to John saying “Please forgive me. I have thought of nothing but ill thoughts of you. I am honored to be in your service and will follow you without question.  For my name, even if not spoken, will still be part of your legacy. Thank you.”

John says with a smile “I told you would thank me later.” Kenta looks up at him with a stunned look and then also smiles.

After they settle back down John ask Kenta “So…do know any of The Traveler’s tales?”

Kenta says “Not many, just that they are human and can summon warriors with their staff.”

John grabs his walking stick, stands and holds it up high shouting “Warriors come to me!” He then looks around and then at Kenta and Nasha saying “Nothing?”

Kenta and Nasha look at each other then start laughing. Kenta says “They mention that The Traveler is great, but never a fool.”

John sits back down and says “and who says great people aren’t fools to begin with.”

John says “We should get some rest I believe we have a long journey still ahead of us.”

Kenta says “By the way, where are we heading?”

John says “To see a Dragon” as he stretches out to get some sleep.

John says “From what The Mother of Nasha’s village said. It’s the best place for me to learn about what The Traveler is and why I am here.” He looks over at Kenta and sees she is nervous. John adds “I thought you were honored to be in my service and would follow me without question.”

Kenta says “But we are going to see a Dragon. Do you know what they are?”

John wakes up to shouting. He sees Kenta grabbing her sword while Nasha is grabbing her daggers to defend herself when he opens his eyes. John quickly gets up and grabs two pieces of wood from the fire and runs to get in between them. He holds both pieces of wood up to each of the women’s faces saying “WHOA, whoa, what’s going on here?”

Kenta growls “That serpent was coiled around me when I awoke this morning.”

John looks at Nasha and sees she is partially transfixed on the firewood. John lowers his head and says to Kenta “Nasha’s kind are cold-blooded.  She may have unconscientiously been draw to your warmth while you two slept and she seem to sleep coil too. Right Nasha.”

Nasha looks at him then Kenta and then nods before going back to looking at the firewood. John lowers his arms and goes to get the fire rebuilt.

They soon start traveling again before midday. John has taken the middle again partly to keep Nasha and Kenta separated as nether of them has talked to each other after the morning incident. John has put his mask on and says as they walk “Well let’s hope this morning’s event is the only action we have today.”

John holds his walking stick up to block an attack. The massive figure stands before him has an ax in hand. John was able to catch his opponent’s shaft and stop them from bringing the ax down on him. John looks his opponent in the eyes, their face is covered in scars and two tusk stick up from their mouth.

Once again they have been attacked by Orcs. But this time Kenta had heard them almost at the same time Nasha had felt them and readied their weapons. Kenta had actually taken one out with one swing of her sword the moment the Orcs rushed in. Nasha, John and the other Orcs stood stunned at the attack. Then the Orcs continued their attack.

John pushes his opponent back and then readies for another attack. He hears Kenta taunting her opponents, which seem to confuse them for a moment. The Orcs seem to see Kenta as the biggest problem and are starting to focus on her. This buys Nasha time to get her bow ready and start taking the Orcs down. The Orcs retreat when they realize they’re not going to win.

Once again they search the dead for supplies and move them off the path.

They travel until the sun starts getting low before making camp. John says as they sit there “I hope we don’t have to keep fighting them every day.”

Kenta says “we should be nearing some more populated lands soon. The Orcs only attack us because we are few in numbers.”

John says “don’t sell yourself so short Nasha. Once you get your bow out, you are very good at taking them down.”

Nasha says “That’s the problem.  I am hunter, not a fighter. I know the basics of my kind’s fighting style, but that’s it.”

Kenta says “yes, close combat is not your strong point.”

John says to them “Then why don’t you two spar for a bit.”

“What!” they both say together.

John says “Think about. Nasha needs to improve her fighting skills and Kenta you are trained to fight.  Nasha doesn’t need to learn how fight with a large sword, she just needs to practice with someone.”

Kenta looks at Nasha and says “He may be right.”

They both stand and face each other with sticks for their weapons on the opposite side of the camp from John. John watches as they start to spar against each other.

Kenta is once again very aggressive in her fighting, which catches Nasha off guard at first. But Nasha is actually very fast and is able to avoid many of Kenta’s swings. Nasha is even able to land blow or two on Kenta because Kenta missed and exposed herself to a counter attack. Nasha then tries to be the aggressive one, but Kenta rears up on her hind legs in surprise. Nasha pulls back after Kenta slams her front hooves in the ground. Kenta sensing the opportunity starts being aggressive again and stomping her front hooves to force Nasha back. But soon Kenta tires of stomping and Nasha takes back her lost ground.

They both tire after about an hour and everyone gets some sleep.

The next morning John wakes up to Nasha coil around him. John hears some chuckling as he looks around for a way out of Nasha’s coil. He looks at Kenta who has the biggest smile on her face. John says “Yeah, Yeah. Just get the fire started again.”

Login & give some love! Tweet
Looking for beta readers.
Feedback and constructive criticism welcome.
The next volume has been released: