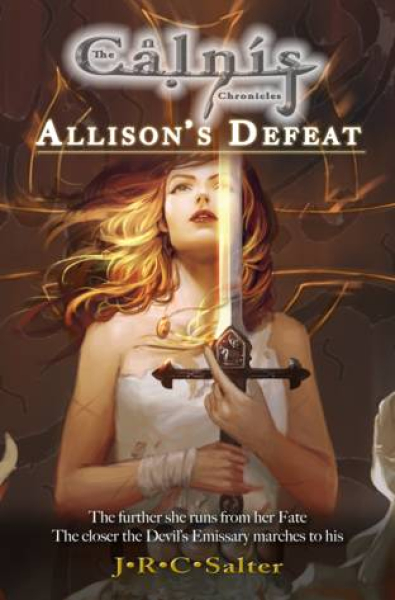 In the world of Calnis

Visit Calnis
The full text of Allison's Defeat is available on the following venues:

The further she runs from her fate The closer the Devil's Emissary marches to his.


Sixteen year old Allison has definite plans for her future. A Fender Stratocaster, to marry her childhood sweetheart, and the cover of Rolling Stone is all she wants. So when a new school friend tells her she is to be God's warrior, and a black cloaked woman enters her life with murderous intentions, she fears her dreams will soon evaporate.
Though Allison refuses to believe in any divine being, her conviction is tested as she confronts her growing psychic abilities and struggles with knowledge she cannot possess. She is thrown into a life where immortal beings battle in a millennia-long war, and Fate has recruited her. At the centre of everything lies a sword, bathed in a bright light, its transparent blade stabbed into the wooden floor; a symbol of her ultimate fate.
Beyond her confusion and dismay, the Devil's Emissary awaits the fight.
Word count ~77 000.
WARNING Contains violence, strong language, and scenes of a sexual nature.
English Contemporary Fantasy

Prologue: The Rising of the Storm

Chapter One: Allison And Kate