Duel of a Lifetime for Two Swordsmiths - Part 2 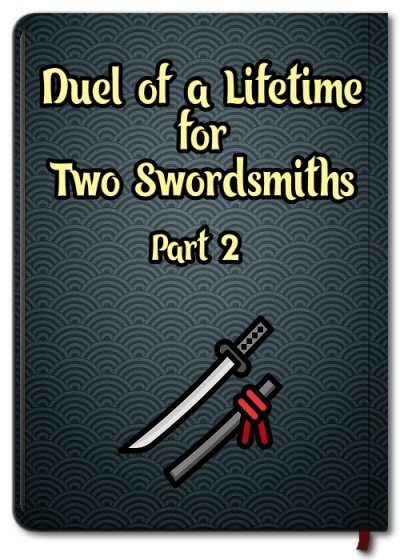 Impatience One Tiny Drop Changes Everything The Challgenge Consequences Legacy

The week passed quickly and Sengo polished the treasured blade himself, which was unusual—one would normally hand the blade off to a master sharpener. Then he made another sword to keep from going stir crazy. Though, he still favored the one he announced the challenge with. So on challenge day, he put the chosen katana into its scabbard, tucked it into the belt over his hakama, and met his teacher and the monk at the agreed-upon spot by the river. The pleasant stroll on the warm fall day lifted his spirits and helped to relieve his jitters.

The monk, Shodon, bowed to greet him and Masamune-Sensei. "Thank you for letting this humble brother officiate your contest. I'm sure you are curious to know the requirements for the test."

Sengo nodded, but Muramasa stood impassively. Has he been through many of these trials?

"To verify which blade is sharper, I will have each of you place your weapon in the stream."

Both contestants and the monk removed their sandals and tabi socks and tucked the long wide skirt of their hakama and robes into their belts before wading into the river. Masamune sucked in a breath and Sengo hissed at the cold water straight from the mountains surrounding Kyoto.

"Now when something goes by in the water, quickly place the sword into the flow in the object's path to see how the item fares."

Sengo was the first to spot a trout swimming in the water, headed right toward him as he held his sword blade-down ready to pounce. As he thrust it into the water, it also hit a leaf. Both leaf and fish were shorn in two. Sengo didn't even feel the bump of the fish on the sword. But the pieces and resulting blood were the evidence of his blade's excellent edge. He was having a hard time feeling his feet, but he had to wait out of respect for his teacher.

Masamune waited for his turn, while Sengo shivered. When he spotted a clump of leaves with a small trout, hiding underneath in the shadow, he prepared his blade. Swoosh! The teacher's sword plunged into the icy water. Every leaf in line with the sword split. But the fish swam by.

Triumph! Sengo could hardly contain himself over the success.

As they exited the river, the monk announced his verdict. "The winner is Masamune."

Sengo's heart stopped mid-motion as he was putting his shoe back on. That wasn't right! "Pardon me, Shodon-san. Did you get the name wrong? Our names sound similar."

Masamune wiped the blade of the katana off with a soft rag, uttering not a single word.

"I did not. Muramasa Sengo-san, your blade is unimaginably sharp. But Masamune-san's blade showed more than sharpness. It showed discretion. Only cutting what was necessary and respecting life. Your blade is one of death."

Sengo's hand raised with his sandal—poised to smash it to the ground. To keep from shouting the absolute wrongness of the verdict and throwing his shoe, Sengo took a deep breath.

That wasn't what the contest was about!

Try as he might to remain calm, he couldn't keep his face from heating up all the way to his ears.

You asked the monk to officiate.

Stiffly, he bowed acceptance, put on his footwear, and headed back to the workshop—unable to give his thanks to the monk or his teacher.

His stomping steps as he threw open the door made the other apprentices scatter. With shaking fists, he tossed the scabbard aside and laid the beautiful sword on the anvil. "Blood tainted." He grabbed one of the long-handled smith hammers and raised it to strike the weapon.

Out of nowhere, a hand grabbed his wrist. "Sengo!" Masamune's voice snapped his name into the air so hard the apprentice froze. "You would destroy this sword just because you lost?"

He shook as he nodded to the teacher he could not view.

Masamune's words were quiet but scalding to the student's already wounded pride. "Pack your things and leave. I can not teach a willful, arrogant, obsessed student."

Sengo's shoulders slumped, and his hands fell. His teacher released his wrist and the apprentice gently replaced the hammer. To be expelled by the greatest of swordsmiths meant he would not gain the edge for smithing in his time. He could never be the best.

It took no time to do as he was told. All he had arrived with was the clothes on his back. At the house's gate, Masamune-sensei waited for him. His brows drew together as he held out the sword to the apprentice.

Sengo skittered to a stop. His stomach tightened as he bowed. He should say something to his teacher. "I'm sorry Sensei for causing you trouble because of my temper. Thank you for all you have taught me."

The teacher nodded and returned to the house.