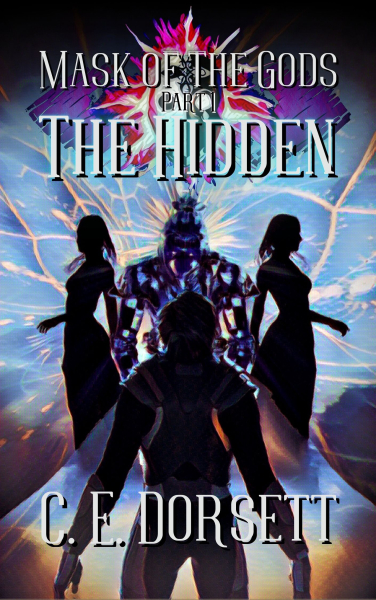 Niht paced around the ancient shrine as he worked through all the problems that faced them.

Amhran and Thaner sat near the high alter and talked about deep matters of soul, fate, and honor.
Iarann set out to explore the structure hoping to find weapons or armor with which they could protect themselves.
Niht bristled against the confinement. He knew it wasn't his own bonds he felt, but Rath trapped in that circle needing to be freed. Deep down in his belly serpents coiled interned seeking release.

He remembered something his brothers said while they were camping in the mountains near their home. "In stillness the mind is ready, but in chaos the body remembers." He didn't understand what that meant then, but now he did.
When he had time to sit and think through a problem with all the facts at hand, he would be able to make himself ready; but in absence of that his muscles would remember what they were trained to do. Power welled up within him.

Moving through the stances and motions Zosia taught them for their exercise, Niht felt connected to all the power within him, into the strange world beneath his feet. His muscles burned from the energy coursing through them.
He hadn't tapped into a hidden wellspring of power, nor had he become one with some cosmic field in the universe. He recognized all the subtle energies moving within him, his fear, his anxiety, his hope, his defiance. Calling each by name as he recognized them moving deep within. They were his strength and his weakness.
If he gave in to the passions dwelling within him, he would lose all contact with reason and be little more than a monster striking out at what frightened him. Ignoring them, on the other hand, would deprive him of the strength and focus they provided.
Every heaven, every Hell, every God, and every demon, lived in him. With a subtle act of will, he could call them forth. He could unleash them into the world for better or for worse.
Sacrificing nothing, embracing everything, he saw it all so clear. Yet, he knew that these were not his thoughts.

Iarann returned, with an armful of helmets, bracers, and three ancient swords he scavenged from the ruins.
Niht explained what he discovered, and the three of them practiced the movement with a sword in hand.

Quickly, they realized that all this time Zosia was training them to fight. Their morning exercises were a form of martial arts that when combined with the sword, gave them a chance that they would not have had otherwise.
When they finished going through the stances for the 10th time, Amhran said, “What do you think the other students are doing, right now?"
"Going through their own trials. Think about it, do you remember seeing any other student after the first explosions rang out?" Niht cleaned the blade of his sword with a rag he found up near the altar.
Iarann and Amhran glanced at one another, then back to him.
"Now that you mention it, no." Iarann shook his head in disbelief. "Do you think each group is facing their own trial?"
"That would make sense," Amhran laughed, "strike that, nothing that’s happened since those first explosions made any sense."
"I think that's the point of this entire exercise," Niht said. "If we are being prepared for life under the mask, life doesn't make sense. Tell me, have either of you felt your gifts engage since all this started?"
"Everything is such a kaleidoscope of strange images and possible futures," Amhran said. "Honestly, I've been trying to ignore my visions so I can keep my head about me."
"What do you see now?" Niht asked.
Amhran closed her eyes. "Colors, disjointed and unconnected to anything around us. There could be words, or maybe glyphs. Wait, wait, I don't think they're looking for us. I don't feel them, or see them. They're waiting for us to come to them. They know we are planning to strike.”
"So we shouldn't give them what they want." Iarann said. "If we attack, and they're expecting it, they'll overwhelm us as soon as we go back in."
"That's because they are expecting us to be clumsy, reckless. They don't believe that we will see through them. They don't believe that we can survive.” Amhran opened her eyes. "They expect to kill us."
"Then we are going to have to disappoint them, aren't we?” Niht said.
Iarann rubbed his forehead and stared into the distance, nodding occasionally as if in deep conversation.
Niht recognized those symptoms. He imagined he looked like that when he talked to Rath, intense with a touch of lunacy. The question was what spirit was he talking to.
Zosia never explained the proper decorum for discussing these aspects of the internal life. Were these experiences private, or something to be discussed amongst friends? Choosing to err on the side of discretion, he didn't ask even though he felt like his heart might burst from desire to know.
Two of the three of the them had forged a connection with their patron, only Niht would be left defenseless, since his was trapped in the compound.

Niht retreated to a private corner of the chapel to meditate. It was difficult focusing his mind with so much looming before them. They needed to lead an assault on a heavily fortified base, armed with only ancient weapons that might break upon use, and without the extensive training their opponents surely possessed.

He closed his eyes, and imagined the layout of the base as best as he could remember. The harder he tried to map out the corridors, the quicker he realized that they never seemed to be in the same place when he came upon them.

It was possible they moved, but with everything that happened since the attack, it was far more likely that they were touched by the same glamour that made them believe they were on an astroid in the void of space.

Strangers weren't meant to navigate the compound with any competence. Since he had only just begun to feel welcome there, perhaps his most recent memories were a more accurate depiction of the place than any of his former.

He fixated on the underground pool where he met Aralyn. There were multiple paths leading back up to the surface. So if they could find one of those entrances, they could sneak in without anyone knowing.

The desolate terrain provided few opportunities to hide a secret entrance into the base. So there had to be a clue, something only a member of the order would see, or recognize as a hint that something was awry.

What was the secret sign that meant door, safety, or entrance? It couldn't be that easy though. For an order the prided itself on secrecy, and remaining hidden, the answer would be more obscure. The answer would look and feel wrong to anyone uninitiated in the path.

Niht thought back to all the stories he heard in his youth. Tales of the Saints, and heroes who defended their people when all else seemed lost. One of the stories had the key.

If only he had paid closer attention. All of those ancient stories meant so little to him when he was a child. He never fancied himself an adventurer, and they had a safe home that he never believed he would have to flee. What was the point of memorizing the great deeds of long dead heroes when their actions felt so distant and unrelated to his daily life?

Not a single story came to him, not one parable about opening away, or finding an unseen path.

In the end, maybe this was his fate. He was here to ensure that his companions escaped the complex, so that they could survive. Maybe this wasn't his story. There was every chance that he was the sidekick in theirs. He was the footnote that explained how they made it through their training.

"You don't believe that, do you?" Rath’s voice whispered into his mind. It was quiet, and distant, and filled with strain.

"What option do I have? We were only able to get this far because you controlled me."

"Sweet child, I never controlled you. I guided you. I showed you the way to go, and you listened. Why have you stopped listening?”

"Because you're trapped in that circle."

Rath laughed. "I am part of you, you idiot. Unless you were dead, I am still here. You believed the lie.”

Niht cradled his masked face in his hands. "Then why can I hear you now?"

"Because you opened yourself to all possible routes back into the compound. There's a part of you that knows you can't get back in without me. So you called out, and I have answered."

Fire burned in Niht’s stomach, as his core flickered to vibrant life. Strength flowed from within. Every breath he took stoked the flames. Their heat warmed his muscles, and awakened his mind.

He focused on them, and the waves of energy that arose within him synchronized with the beating of his heart. They were one. This was the art of cultivation, the power that had alluded him all his life.

This was his power, his strength. Through it's interconnection with the world around him, it gained form and substance. Like all things in this world, it wasn't his to possess. It was part of him, and so acted in concert with him to achieve his goals.

Power arced through his body, stinging his muscles like a swarm of angry bees. He screamed.

The sound echoed, and reverberated back into him, forging the heat even stronger. He had fallen into a fiery furnace. He was not alone. All the gods, all the devils, every heaven, and every hell was here, now, manifesting through him.

His soul melted in the inferno, and the pain hammered and twisted him, making him stronger. His memories, his nightmares, his hopes, and his fears, struck at the very fiber of his being one after another.

Years of frustration, anger, anxiety, and fear escaped in the harsh tones of his screeching call.

Tears cooled his cheeks, and called him back to his senses.

He was, a sort of truth, the hand of fate, the bringer of doom. He knew his purpose, and would fulfill it.