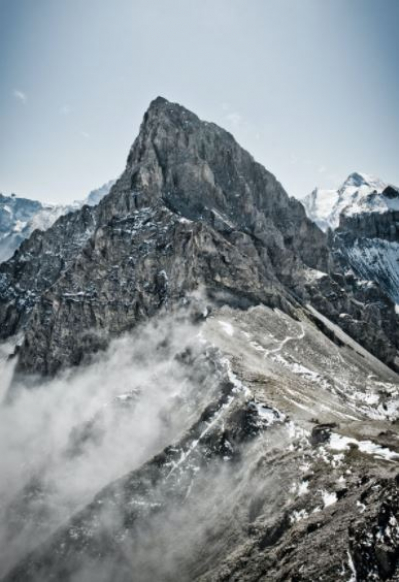 In the world of The World of Acuthan

With the sky still clear, the emerging moon threw its silvery glow across the landscape as they reached the site seen so vividly by Joziah. During the final meters of his approach the image suddenly blinked out of his mind. No matter, he knew what he had to do.

"We are here" he announced.

"There's nothing here. Just mountain and poor light". Fillian scrutinised and felt round the cold stone but nothing, no sign of any entrance. "Joziah, if there is an entrance here a mouse couldn't get through".

Ignoring his uncle, Joziah walked to and then along the rock face for ten meters. He looked upwards and took in the beauty of the stars. Momentarily he was drawn into their endless depths and then he focused his gaze on the moon. Thank you for lighting my way. He abruptly reached out his hand slotting it through a small unseen crevice. Grabbing what felt like a bar he pulled. Standing back he listened to the crunching sound of stone on stone as it reverberated and bounced off the mountain rock. The ground split open and slid apart leaving a roughly rectangular opening. Stairs led downwards into the dark.

"If we can't go through, we go under". Joziah flashed a wry smile at Fillian and motioned with his head that it was time to descend.

"As you say" was all that Fillian said in response as both men took out a torch, their weapons sheathed and ready should they be required. Fillian's thoughts raced. He could see a transformation in Joziah. There had been clues for many days but now it was almost unmistakable. There was no vision now, no-one guiding him he thought. It must be Joziah himself. What I have hoped for twenty years. What I have worked for. This is the moment of realisation.  The mental abilities he had applied to his nephew and his visions for so long he now applied to himself. Focus on your breathing, nothing else matters. Be calm. Be ready. He looked down into the dark opening as his nephew disappeared, and followed.

A few moments afterwards the cloaked figure Joziah and Fillian had seen over two weeks ago silently descended from a high perch a stone's throw away to the south. Shelendra pulled back her hood and padded across to the stairs. Confident that she hadn't been seen she started to descend.

Joziah and Fillian took the steps down to a smoothly cut, largely circular, tunnel that clearly led off into the mountain. Its pinkish white walls brightly reflected the torches they had lit as they descended and felt wet to the touch. It twisted its way into the mountain and then rose upwards until after a hundred meters or more they found themselves in a huge cavern.

The colours of the rock and ice structures were breathtaking. Pinks, greens, blues, creams, and practically every other colour that could be thought of was found here. It was simply stunning. The wall and ceilings looked waxy and glistening. There was natural light in here too, somehow filtering through from above or around, they couldn't tell. Blue and green algae plastered a significant proportion of the surfaces and these too emitted light mixing with the rest in the cavern to produce a light show that left two men in awe. The smell of the place was less spectacular; it was musty and caught unpleasantly at the back of their throats. But the temperature was no worse than cool, a pleasant contrast to the outside they had left only minutes ago.

Fillian looked sideways at Joziah, waiting for a move. All of his visions were from the other end of this cave system, his family having fled from the other side of this great range, and so he was looking to see if he seemed confused. His question was answered when Joziah set off purposefully towards the back left of the cavern. He sees. As they got closer they saw an opening to a wide tunnel and Joziah began to run.

"It's so close uncle, a few turns only and we are there". He was younger and quicker leaving Fillian rapidly behind. Fillian called after him to be careful and slow down but there was no point. Joziah had no thoughts but for his family.

Fortunately there were no off-shoots to this tunnel or the caves that it linked, so following Joziah was straightforward enough, but as he ran Fillian was constantly slipping and occasionally falling on the icy surface. After no more than several hundred meters, he slid round a bend, banged into the opposite wall and was faced with an incredible sight as he looked to the end of this funnel shaped area. Joziah was twenty meters further ahead of him, at the wider end of the funnel, curled on the floor in obvious pain peering through a massive wall of ice. It measured at least ten metres high and fifteen wide and was astonishingly pure; so clear there was practically no visible distortion. He could see every detail of the gruesome scene behind. But what he saw was not the event Joziah was witnessing.

Joziah sped from the multi-coloured cavern as fast as he could with no thought for his uncle. He was searching for other members of his family. The floor was icy and slippery but he managed without any problem to keep his footing. Suddenly up ahead he could hear shouts. He recognised his mother's desperate shouts. Hope rose again in him. Was I so wrong? I can save them.

"Mother, it's me. I coming to you, just hold on". He mentally prepared himself to ready his weapon when he saw the Red Hand assassins. He knew there would be five of them, but he vowed to himself to take Vistok down first.

"Vistok, you bastard, you're mine". He hoped that hearing his voice may cause the assassin to hesitate and beyond all hope also stop his father from now needlessly taking the lives of his brother and sister.

The noises were louder now. He flew round what he hoped was the final turn. And it was. All the hopes he had been petrified to entertain were realised. His mother was there. Her silver hair was full of frozen water gathered during her flight through the caves. Her clothes were cut and blood ran down one of her shins from a nasty looking cut on her knee. Looking grimly determined she raised her hands, palms facing out.

He felt rumbles that shook the tunnel and the sound of splintering rock that burst in his ears. He carried on running desperate to get there in time, to get inside and defend his family. He was so near. But he thudded against the wall with bone crunching force. The air in his lungs burst out of him and he crumpled to the floor. As he went down he saw his mother press against the floor behind an outcrop of rock and look straight back into his eyes. She nodded.

Joziah looked on in horror as he then saw the death of his family repeated in front of him as he had seen it before, but he couldn't move, he couldn't speak, and he couldn't look away. Hope drained again from his soul like blood from a fatal wound. Jander swung his blade. Folen, Mythra. Vistok saw and blocked his mother's lunge and battered her to the ground. Jandar, already dying inside from the loss of his children drove forward and killed an assassin before a flurry of strikes cut him down. Father. And at the end his mother mouthing her final words to her beloved displayed the kind of courage that the Red Hand would never possess or comprehend.

As the ceiling collapsed the assassins ran but it was too late. One was dropped by the ice fall and the others were left trapped in an icy tomb with nothing to do but wait to die. They tried to smash through the ice-wall, but the magic that his mother had poured into it was too strong for them to take even the smallest chip from it; her powers that had frozen the final moments of their lives in glass-like ice so he could see them played back, and finally understand. How tortured the assassins must have been as they waited for death to come, when they could clearly see the way out through that crystal clear barrier. A fitting death, Joziah thought, for those cowards that prey on others because of their beliefs, and kill adults and children without distinction. But Joziah could not take any satisfaction or solace from the fact.

Nor could he cry. No tears fell or formed. He was numb. He doubted he could ever cry again. He simply sat and watched; the pain from his injury masked by seeing the true deaths of his family as they happened.