Duel of a Lifetime for Two Swordsmiths 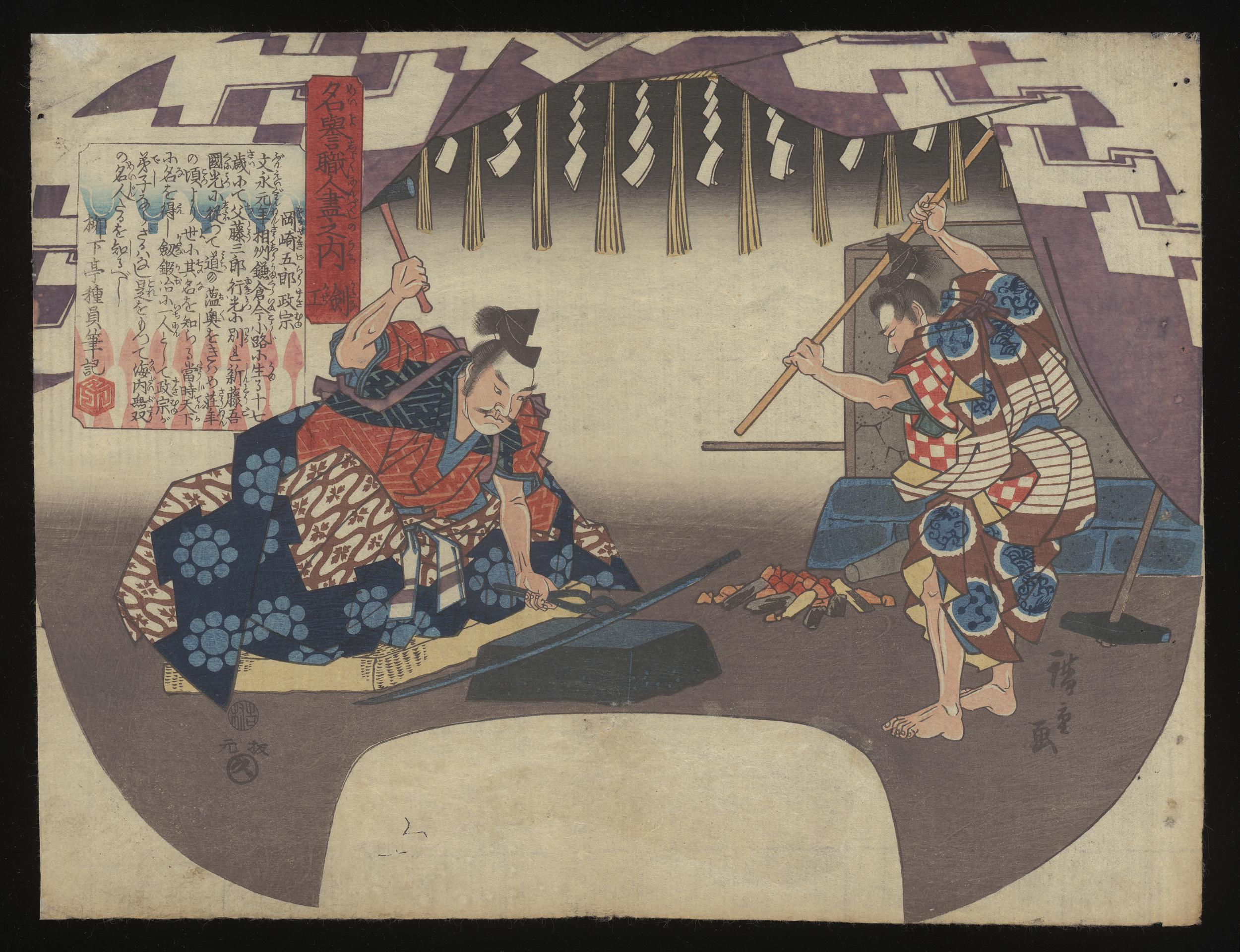 Goro Nyuudou Masamune, who lived in the late 11th century to early 12th century, was a devout priest who poured his belief into his renowned swords. Kotodama accompanied every part of the process. From the care of his tools to the smelting and separating of the ore to the layering and folding of the steel. Every ring of his hammer was reinforced by words to strengthen the blade as he formed it. Each commission was made as a pair where the second one was an offering to Inari, the god of smiths, harvests, and rice. His crowning achievement was a blade so sharp that they said it cut light, rendering the sword invisible.

Students from all over Japan came to learn from him. Like any good master, he would never share all his secrets because students needed to develop their own specialties.

Muramasa longed to increase his family’s knowledge to gain an advantage that would mark his family’s name in history for eternity. Improving every minute detail of his family’s work was not enough. He needed a breakthrough.

To find it, he journeyed to Kyoto and the largest Inari shrine - Fushimi Inari Taisha, bringing offerings of the most expensive sake he could afford and his best sword to date. Lugging the heavy barrels up the thousands of stairs of the red torii gate lined, four-kilometer path to the top of Mt. Inari was a test of faith. Despite being in excellent shape, he had to stop along the path at the restaurant halfway up the hill.

While he rested, he ordered Inari-zushi (a set of rice cakes with sesame seeds in a wrapping of fried tofu skins) for lunch and enjoyed the view looking over Kyoto.

“Good Sir, my son would gladly help you carry the barrels to the top of the mountain. For I believe that is where you are headed,” offered the restaurant owner.

Muramasa bowed his gratitude. “Thank you. But this task is mine and mine alone. Though I will request a second order of Inari-zushi to take with me.”

After trudging to the top of what seemed like endless stairs, his legs wobbled like agar. He could barely make it through the last torii gate and the final set of steps. Waiting until he recovered, he stood aside and watched others offer their prayers.

When finally alone and ready to make his plea, he placed his offerings, including the Inari-zushi that he longed to eat. He would not leave until he had his answer.

Night fell, no response. He huddled in his cloak as he took up watch and the lanterns were lit.

Morning came, still no sign. He would not eat those rice cakes, no matter how much his stomach growled.

Unfortunately, a priest found him. “This is not a place for homeless vagrants. Please leave.”

“Good Priest, Sir, I am only awaiting Inari-sama's answer to my prayer. You see, I am a swordsmith and desperate for an answer for my family’s honor.”

Muramasa continued trying to explain his situation, but the old man would not hear his words. The smith would not fight a servant of the god he was beseeching. So, the priest unceremoniously shooed Muramasa from the top of Mt. Inari.

Tromping down the steps through the top torii, the lack of answer filled his heart with petulance and despair. But when he looked back, the old priest had vanished, the shrine seemed different, and worst of all his offerings were gone.

Were his eyes playing tricks on him?

Needing nourishment, he opted to take the same path back down the hill to stop at the restaurant. But it was nowhere to be seen.

Did he take the wrong way?

At the base of the mountain, a white fox sat on the path. “Muramasa-san, do not be discouraged. Inari-sama answered your prayer,” It barked before dashing off into the trees.

What did that mean?

His stomach growled again, so he resisted following and continued through the path of torii. Stopping to buy an ofuda with a blessing from the shrine building at the bottom, he jumped when the attendant spoke and dressed in a much different manner than he was used to. She almost didn’t take his coins and he could swear she put the wrong date on the paper—8th day of the 8th month of the 3rd year of the Jougen era.

Shouldn’t it say the Kouji era?

On his way out, the street was unfamiliar. To see if he was dreaming, he slapped himself. The sting verified that he was awake. But, people wearing ancient styles stared at him.

One man with a magnificent katana stuffed through the strings of his hakama, bowed his head in greeting as if unfazed. “You are the one I was told to expect?”

Muramasa knew that sword. He bowed deeply and nodded.

Then the grey-haired Masamune handed the dumbfounded man a rice ball and walked on as if nothing was out of the ordinary, while his new apprentice stifled his amazement and followed at his heels.

The master's first task for the apprentice was reconditioning the anvil before they put it to hard use by working on the best blades in Japan. Muramasa put his heart into the menial task. For surely he was being tested by his new master.

So you see, two of the greatest swordsmiths met. Muramasa trained under Masamune. They forged two of the finest swords ever made.

One a blade to carve a path of peace, the other to wage war.

Who was the better sword maker?

That, my friend, is a tale for another day.