The Eye of Horror 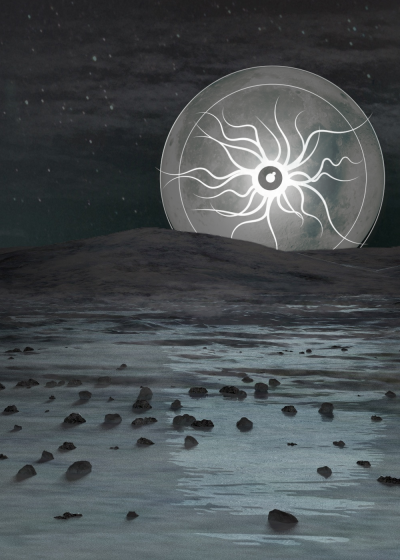 In the world of Somelion

The gaunt woman with the raven black hair was sitting on her rotting, wooden throne. Crude stone  was all around her, and not a single speck of light was there to disperse the darkness filling the room.

Her head was propped up by her right arm, the elbow supported by the armrest of the throne, which once must have been decorated with masterful artworks. Her left hand was laying on the grey skin of her sunken-in belly, exposed by the tear that separated the top and bottom halves of the once pompous and beautiful ball gown that had always been her favorite. Now it was nothing more than a pair of rags, with countless tears and fringes, and covered in a layer of brown from all the dirt that had accumulated over the last twenty years.

The heiress, as she was called by the mortals, had her bare legs crossed, and the left foot was slightly bobbing to the rhythm of a song she had once known the name of and that was occasionally occupying her mind. Almost lethargic, she was watching the two ghouls that were eating the flesh of a soldier who had dared to invade her fortress and attack her. A rare occurence, but it happened. Now he was lying in a pool of his own regret, and the sharp nails and teeth of her ghouls were ripping the meat off of his bones, until nothing would be left. Soon they would be done, and she would resurrect his remains to join his killers in forever wandering the empty halls of the fallen fortress, as one of its ever-silent inhabitants. She had always preferred the dry bones of skeletons over the stinking and putrefying corpses that wandered the plaguelands.

She spent another ten minutes watching her ghouls feast in the absolute darkness of the throne room, but it became clear that they would take a while to fully consume the soldier's remains. For the longest time she wondered why ghouls even desired to consume the flesh of the living. They didn't need to feed to survive, and they certainly did not have enough of their minds left to enjoy the act of eating. Eventually, she settled with the explanation that their empty bellies triggered their insticts, and even though this was not the case for her, she was content with that reasoning.

The heiress decided to check on her project. The ghouls would probably need another hour to finish eating, and while she was crossing the pitch black throne room it came to her mind that there was no rush whatsoever, because ghouls didn't even eat bones anyway.

As she reached the big, two-winged door on the opposite side of the throne room, two ghouls, who had been standing by, opened the door just wide enough for her to comfortably walk through. She entered a wide hallway, which was made entirely out of the same crude stone as the rest of the fortress, its length stretching out over the whole width of the room she just left, before eventually making an inward turn on both ends. The hallway was illuminated by three ever-burning torches that threw their dim light onto the cold stone walls and floor. The light was feeble enough for mortals to have trouble seeing properly, but it didn't bother the heiress, for her eyes - which were as white as freshly fallen snow - were allowing her to see in any kind of lighting.

Would she follow the hallway to the left, she would circle the entirety of the throne room before eventually reaching the main entrance, as well as the stairs leading up to the first floor. Instead, she turned to the right and followed the hallway up to the corner, where it turned right and immediately transitioned into a stairwell, before ending in a wooden door. She climbed down the stairs, opened the door, and entered the dungeon.

As the door fell shut behind the heiress, it was as if she entered a different plane. The stone floor of the darkness-filled dungeon was the only reminiscence of its former purpose. The walls of the small ten-by-ten meter wide room were covered in thick, pinkish-grey flesh, slimy and warm to the touch. Around ten thick tentacles and fifty thin probes sprouted out of the formless flesh, and all of them were focusing on something right in the center of the flesh wall opposite of the dungeon door. The heiress took a step closer, and she couldn't help but to smile.

Embedded into the flesh was the torso of a woman, naked and unmoving - apart from her chest, which was calmly rising and sinking with every breath she took. Her breasts were resting on her swollen, pregnant belly, and the probes gently moved across the bronze skin of her exposed body, meticulously checking for wounds or injuries.

That was the only purpose of the breeders in the dungeon. Other breeding grounds had breeders constantly create new eggs, which then were injected once a week into the broodmother trapped right between them. But not these breeders, their sole purpose was to ensure the physical wellbeing of their captive.

The heiress laid her hand on the belly of the broodmother. What was growing inside of the womb was a unique creation; not a worthless abomination like the lifespawn that were born in the other breeding grounds, but a being with a mind of its own, and a deep bond that it only shared with its mother.

Thirty days had the captive now spent as a broodmother, enough for her mind to break. She would have to endure another thirty days, until the being in her womb was ready to be born. If she survived until then, she would no longer be a slave of the plaguelands, forced to birth soldiers for the rest of her life. She would be the first of the Mother's Guard, and she would shape the fate of the world at the side of her mistress, the heiress of horror.