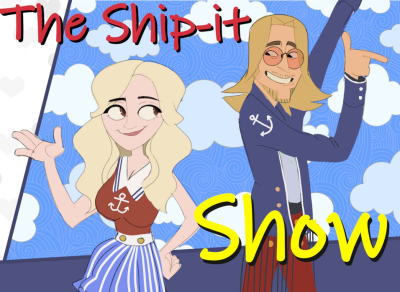 In the world of The Kaiju Cave

The candy kingdom was in full decoration mode when Finn and Jake entered the walled city. Pastels and blood-red was plastered everywhere.

Whoa Finn, looks like PB and Marcelline are really going far this time.

Jake poked Finn in the ribs and pointed to a sign on a window they were passing.

Hey man, you're still not pining over Bubblegum, are you? Can't you just be happy for once?

Jake's backside inflated comically in front of Finn's Face and deflated in a fake fart.

Finn laughed and his mood seemed to improve. Jake dropped the questions as they entered the palace and took their seats next to Flame Princess and Hotdog Princess.

Jake looked at everyone in the grand hallway, where Bubblegum does her normal announcements. Today was different.

Marceline the Vampire was dressed in an all-black tux, her bass Axe was on her back, and she looked nervous.

Ice King... or Simon, since he no longer had his crown, stood at the podium and cleared his throat.

People of Ooo... we are gathered today in this union of love and friendship between Princess Bubblegum, and her princess... Marcelline.

The crowd gave polite applause... Finn smiled to Marcelline who waved nervously. Jake’s mouth stretched into his ear and whispered

Come on man, you gotta tell me, what's eating you?

Finn shook his friend’s lips away and shushed him. The music started and the doors in the back opened.

Princess Bubblegum was in a pastel pink dress with a long train and carrying a bouquet of butterscotch flowers.

The band kicked up its tune, an old song from the old world, as Simon called it. Princess Bubblegum was a darker shade of pink and looked embarrassed having all eyes on her, for once. She took her place across from Marceline.

When Marceline came to me, and asked me to stand with her on this day, and even officiate it, I was beyond words. I had spent almost a millennia as Ice King, and had lost my mind… and now, having recovered, the little girl I saved has grown up and found someone to love her.

Simon wiped away a tear while the Ice Crown wearing Gunther gave a squawk and tapped his wrist, telling him to hurry up.

Simon:
Now, the blushing brides have something to say.

Princess Bubblegum:
Marcy, what can I say? Over the centuries, you’ve been a driving force in my life. My darkness to my light… my punch to my bowl… my tart to my sweet… Well you get the point, I dig ya, and I want you to dig me, cause I think that’s mathematical.

Marceline:
Dang, PB, you hit the bass strings of my heart. Your smarts and charm always have me rocking and never knowing what’s happening next. I wake up in my coffin every evening, looking forward to our talks… and after Simon told me about this marriage thing he wanted to do with Betty, I had to put a candy ring on your finger.

Princess Bubblegum:
You understand I’m the highest court of law, and nothing in here is legally binding… I don’t even think Simon’s ordained by Glob to marry people… and I should have him candied for assuming a higher role than me… but I love you and want you happy, and I know doing this will put a smile on that face.

The candy kingdom let out an awww. Jake wiped away a tear.

Jake:
We both knew how sentimental she is… I mean, staying off execution for Marceline? She has softened up… Okay I’m going to make a scene if you don’t start talking…

This may be silly to say, but it’s tradition… should any object to this union…

The ground quaked and split in two… A demon in a suit rose from the ground, as the crack sealed itself.

Marceline:
OH COME ON! CAN’T I HAVE ONE NICE THING, DAD!?

Jake:
Hey Abadeer! Go stick it in your ear!

Abadeer ignored jake and approached the podium. He waved his hand and flung Simon across the podium and forced him to sit in an open seat and he took Simon’s place as the officiator.

Black flames erupted from the walls as the entire structure changed and twisted into an almost mockery of its former self. Black roses sprouted from thorned vines and created a bouquet.

Hunson Abadeer:
Oh come on, You didn’t think I’d miss your big day? I am your father, and I should be the one to give you away…

Marceline: (groaning)
Dad… don’t do this…

Hunson Abadeer:
You brought the ax… you knew I was coming. Did you already choose?

Marceline nodded and pointed to Finn.

Marceline:
Finn is my champion and will fight to win my hand (she said with gritted teeth)... She moved to pass the ax to Finn who grumbled and stood.

Princess Bubblegum:
EXCUSE ME?! WHAT AM I CHOPPED BUBBLEGUM? I AM THE ONE MARRYING YOU, AND IF SOMEONE HAS TO KICK YOUR DAD’S ASS TO DO IT, IT’S GONNA BE ME!

Finn did as he was told with a grin on his face. Marceline looked shocked as Princess Bubblegum snatched the demonic ax bass from her hands and unleashed a torrent of attacks on Hunson Abadeer, screaming like an Amazon warrior.

Finn: (whispering to jake)
Sorry, Marcy told me what her dad might do, and we came up with a plan to stop him… I didn’t like the idea of fighting him to win Marcy’s hand, and if I had to… I would just give her away to PB, but that just felt wrong…

The fighting continues, furniture is flying and Abadeer looks ragged and confused.

Princess Bubblegum was in a blind rage and continued to thrash Abadeer until he opened a crack into the ground and retreated back to the underworld.

Princess Bubblegum stood haggard and out of breath and gripping the red double-bladed ax bass at the ready and glared at the rest of the crowd, her dress torn and her hair was disheveled.

Simon hurriedly took his place at the podium to complete the ceremony.

DOES ANYONE ELSE OBJECT?

I'm a huge adventure time fan, and I loved this ship for the show. I always hated how everyone relyed on Finn, he's grown in the show, and in my headcanon.

He'll be happy the people he's loved in his life have found happiness.

I left it at a cliffhanger, because we all know how the rest of the story will end, they get married an have a happy ever after.

Login & give some love! Tweet
If you enjoy this or any of my other work, please help support the Kaiju Foundation of the arts... Liking, Subscribing, Donations, all help keep the Kaiju Cave lit, and a little Kaiju's dream alive!