Adulting: RESPECT -- Finding Value in Others 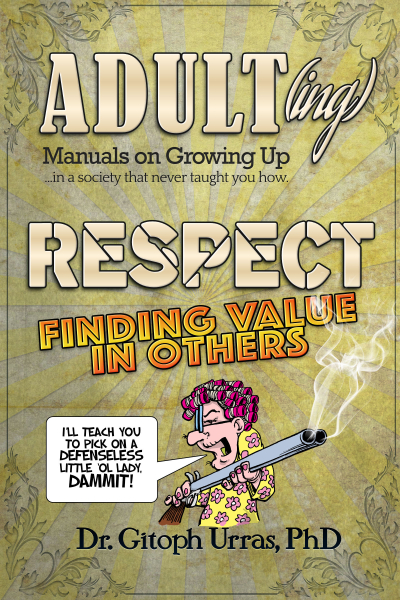 Title Page Copyright Forward Introduction Definition The Problem The Solution Take Action In Closing About the Author Other Books by Dr. Gitoph

When he’s not engaged in having arguments with ignorant politicians, acting as a survival flotation device or a master sliver-picker-outer (just ask his grandkids), he’s also a podcaster and avid teacher. With more than 30 books and thousands of articles under his belt, his focus has ever been on the potential of the individual.

Gitoph is best known for his blunt, unconventional and often comical parenting views which he shares with the public through book, blog and podcast.

He lives in District 11 with his wife, Gilian, his organically grown fan club and loves communicating with readers.

My dad, Jaime Buckley, is probably one of the most genuine personalities you'll meet online.

As a father of 13 hereditarily passionate and driven children, his heartfelt visions for their future--not just in business, but in life--have nuanced themselves throughout the work of his career. As a professional illustrator for over 30 yrs, game creator, podcaster, author of 25 books, 13 comics, and 2 graphic novels, his goal in this was to create worthwhile heroes for children to emulate in a world where true heroes are hard to find.

He launched WantedHero in 2005 and received 750,000 visitors from 60 different countries, all by word of mouth, in the first 10 months.

This business being founded on the fantasies that began to bud and bloom in his youth, was a reminder that he had pursued illustration in the beginning—wanting to see others achieve their dreams and goals as much as he desired to reach his own. And in the 1,000+ articles he's written since 2006, and over 500 clients giving 5-star ratings, these values have never undergone reduction or minimizing.

At the heart of all his success, in the firm hard ground underneath his most epic and humbling setbacks, the essence of my father's work has always been a love for people.

Intrinsic value for the soul of an individual.

My daddy,…my favorite storyteller, has dreamt up a million dissimilar ways to teach me that every human being has infinite worth.

You can connect with Jaime on:

Best of all, you can email him anytime at: [email protected]

It may take him some time to write back, but he always does.