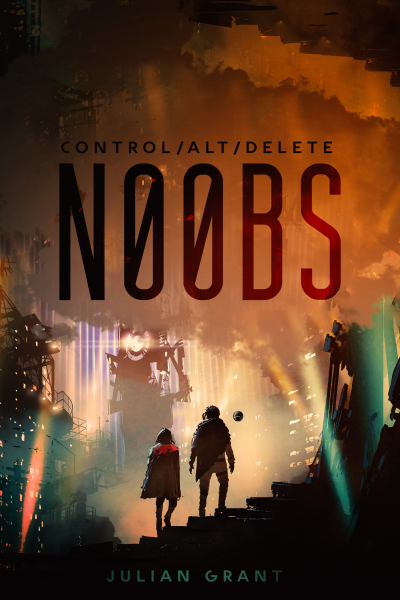 The news broke on DNN first. Megacity’s One through Ten all broadcast simultaneously the consciousness hijacking perpetuated by Major Anderson and the Psionics division of the military. All of the data that Jericho had amassed streamed worldwide care of the online BERSERKER platform. Retaliation was swift. Both Axiomm and the Military issued stringent denials with experts trotted out to the news channels, online media outlets and visiting in studio with the celebrity newscasters. It didn’t help. The body of evidence collected was damning with the details of the Hieronymus machine, its ability to lift the consciousness of a human being and transplant it into a positronic brain all hotly debated by the experts and the general public. From deep in the belly of the MMORPG, Jericho watched in bemused interest as he continued to time-release materials from a variety of distant and distinct hosts, all safely wrapped in a VPN Plus enabler of his own design. Rarely was his digital fingerprint ever in the same place and the continual world-hopping bi-location ghosting his presence in two distinct areas at the same time was magnified by a volume of whoop-ass once he increased his algorithm variables. He was everywhere and nowhere all at once and the authorities couldn’t stop him.  Even though he had adapted well to his new life in-engine, enjoying the ability to walk and live as a blacksmith, like he had intended, he still owed a debt to the world. One he was determined to pay. The world agreed full-heartedly as the candid video footage appeared of the systematic capture and vacuuming of off-world inhabitant consciousness to feed the ever-increasing 'bot market.  All around the world, protests had started up demanding the shutdown of the 'bot and ‘droid programs that were a regular part of everyday life in 2053. Factions were strongly divided with advocates for the rights of the transplant citizens drawing a parallel to modern-day slavery while proponents for robot culture demanded that the positronic brain, while enhanced by human consciousness, was a essential necessity of life.

It didn’t take long for violence to be part of the regular news cycles. The court systems were inundated with law suits, both Federal and individual as conciousness legislation was hastily designed to guarantee the digital rights of all citizens and the sovereignty of the digital self. No one had the right to usurp or transplant the human self consciousness of another under the proposed legislation that was currently under judicial review.

Jericho sighed, knowing that the continued release of his information was only going to further inflame the concerns of the public, enrage the military — and ultimately destroy the Axiomm stranglehold on society. He had arranged with Ger to time-release the information over the next sixty days, allowing him enough time to give him and Isla a chance to stop Anderson, relocate his Mother and return Isla to Earth so she could try to resume some semblance of life. The hijacked peoples, shipped to the BERSERKER platform, had already begun to build a digital community here, building up their own networks of infiltration and information. Millions of visitors to BERSERKER found themselves now being asked questions in-game about the information dump orchestrated by Jericho — and the seeds were being sowed among the players young and old.

Under the guise of the massively popular game, the new players who now joined found themselves actively involved in town hall meetings, tavern events and open-air discussions about the very information and ideals that non-gamers were actively debating IRL.

The only thing missing was Isla and Ger.

Jericho continued to monitor the online, dark and deep web portals looking for them. So far, he hadn’t found a link or a clue in the aether. He needed them if they were all going to find a way back.

<I’m serious, this is freaking me out.>

<I know, I know. We’ve been here as you rebuilt yourself. It was amazing to see.>

<What are you talking about? I can’t see anything. How are we even talking?>

<Okay. Let me do something okay. Stand by.>

Isla opened her eyes. The sun was a glorious orange ball, setting behind a corpse of trees that spread out before her. An endless wash of greenery, populated by colorful songbirds and the scent of evergreens filled her senses. Whoah. Where are we? She turned to see Ger, leaning up against an ancient fir-tree, a crooked smile on his face. Dressed in Medieval style leathers, he looked just as she had last seen him. Maybe a little sadder around the eyes.

Ger pushed off the tree and moved towards her.

Isla glanced at her own hands, arms — clothes. She too was decked out in the fashionable gameware of an old-school Avatar. Brown leather jerkin, vest with high boots and a rough-hewn shirt.

‘How did I get these clothes. Please tell me you didn’t dress me like this?

Isla’s face burned with embarrassment as she imagined Ger dressing her. Across from her, Ger shook his head, signaling for her to follow him.

‘DUDE! Like, what is going on? The last thing I remember was being strapped down to that frakkin’ machine of my fake Dad’s — and feeling myself — dissolve, I don’t know. What happened up there.’

‘It’s just over here,’ said Ger. ‘Follow me and I’ll explain everything.’

Isla scowled, glaring at Ger as he moved off from the clearing she had mysteriously found herself in — following her maybe-boyfriend along a thin, woodland path.

‘Really, Ger. Mysterious, much? Just tell me what’s going on.’

Isla crested the hillock the path lead to, revealing a small bench looking out over the valley below.  Ger sat and pointed out towards the expanse visible from the bench. ‘Sit down, GNGR. We got a lot to talk about.’

Beneath them, the entire BERSERKER eco-system flourished.  Miles upon miles of villages, forests, mountains and life stretched out. ‘Is this BERSERKER?’ Isla asked.

Ger nodded. ‘Once we got back from space, we went a buncha places first while I tried to find a place for you to heal.’

Heal? What does he mean, heal? What really happened up there? Isla dropped down next to Ger, tearing her eyes away from the sprawling metropolis beneath them. ‘Tell me,’ Isla whispered.

Ger drew in a deep, solemn breath, turning to her. Tears formed in his eyes as he gently whispered the truth that Isla already knew.

Ger sniffed back a tear, reaching out for Isla’s hand. She pulled back from him, wary of his touch. Ger sighed and continued. ‘Anderson was uploading your consciousness into the machine and I tried to stop him. I shot a laser bolt at the machine you were strapped to — and I think it killed you.’ He started to cry softly. ‘I’m so sorry.’

Isla reached out to Ger, holding his hand. ‘Dude, I was already gone when that happened. That d-bag had already jacked my brain - my self - even if you hadn’t shot the machine, there was no coming back.’

Ger wiped his nose, his eyes wet with tears. ‘Are you sure?’

Isla nodded. ‘Yeah, she sighed. ‘I remember all of that. What’s really fuzzy is how we got here and what we’ve been doing?’ I’m dead. OMG, I’m dead. Aren’t I?

‘I ported into your Hieronymus unit at the last second and pulled you out and booted us Earth-side using the satellite’s transmitter. It got a little gnarly as we slipped into the military mainframe. But I found an old DOS operating system I cached us in.’

Anderson, or the man everyone knew as Anderson stood looking out at the observation portal, alone except for the infinite vastness of space. How could it have all gone so wrong?

The satellite rocked softly as it continued to orbit around the dark side of the Moon. They had been in transit over the last forty-eight hours and the workstation had continued to monitor the terrestrial upheavals that now dotted the globe. All Megacities were reporting insurrections amongst the working peoples, with sympathies for anti - 'bot groups running at an all-time high. Axiomm was already talking about a complete reversal of the Psionics program once they had developed a new hybrid-mind technology to replace the omnipresent robots that dominated society.

It won’t work, Anderson mused. They’re already too engrained, too much part of their everyday life to turn back now. Without 'bots, our 'bots, they won’t know how to cope.

‘We’re in position,’ Oleg’s voice sounded from behind him.

He turned, grimacing at the burnt metal skull that gleamed dully at Anderson.

Oleg had refused to opt for a new skin after the skirmish with the kids that had ruined everything. The large Russian 'bot scowled at Anderson, no pretense of military rigor in his manner.

‘You really should get a new skin, Oleg. You look — rough.’

Oleg shrugged, tapping on a nearby keyboard, slipping into the chair across from the terminal. Ignoring Anderson. ‘Bringing up the transmitter now. You should get ready.’

Anderson drew a resigned breath, moving to the large viewing screen adjacent to Oleg. He smoothed down his uniform, quickly checking his reflection in the opal glass. Shielded by the moon, the transmission portal Oleg was about to open was masked by the bulk of the landscape from interfering or covert spying from Earth-bound viewing stations.

‘Okay. Bring it up.’ Anderson sighed.

Onscreen, the static of a deep space transmission rolled slowly into life, the image onscreen wavering as if underwater. The slow rolling motion of the greasy green-grey monitor still made him feel queasy every time he connected. It didn’t help that the onscreen Kray Commander was a gruesome lizard apparition. Large crocodile features married to a thin humanoid frame with extended fingers and claws sluggishly rolled onscreen.

<You have failed, Anderson>

Anderson nodded. He knew the penalty for trying to avoid discipline.

‘I have a contingency plan,’ he started to explain. ‘We can…’

The Kray Commander waved his claw towards Anderson, shutting off his excuse.

<We too have contingency plans. Your ineptitude has forced us to accelerate our plans based upon the current Terran activities.>

Anderson waited for the Commander to tell him. ‘Go ahead. I’m listening.’

Onscreen, a hieroglyphic, undecipherable to Anderson, flashed as symbols, pictures and numbers escalated in rapid fashion. Streams of code flashed in an unending display of digital information.

<We are transmitting the logistics and operating protocols for the next step of our assimilation. You will follow this without fail. Do you understand?’

Anderson chanced a glance at Oleg at his workstation who was downloading the operating protocols as transmitted by the Kray. ‘Receiving,’ grunted Oleg under his breath.

<You have your orders, Major. Carry them out without fail. Transmission out.>

The screen winked off as Anderson moved to Oleg. ‘Do you have it all?’

Oleg nodded. ‘Yes, it’s all here. When do you want to start?’

Anderson moved to the observation window, looking out at the bleak lunar landscape before him. A wasteland once populated underground by the Krays. Will they do this to the Earth as well? What choice do I have?

Oleg initiated a transfer protocol streaming the alien code downloaded from the Kray commander. Buried admist the complicated algorithms and operating protocol was a clear and distinctive message designed to impact all positronic brain robots and androids worldwide.

Anderson sighed. There’s was no turning back now.