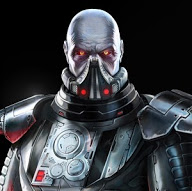 Rigin Eldritch Lorae has lived in the southwestern US his entire life, and as such has gained an unhealthy appreciation for heat and an understandable intolerance for cold. He self-identifies as an otaku and is a self-proclaimed Lich King and the Sith Lord Darth Tromos.

Necromancy, LARPing, discovering new tricks for magic (and similar)-users to out-perform their opponents

Anything sci-fi and/or fantasy, including comic book movies

Anime, preferably a combination of comedy with horror and/or action.